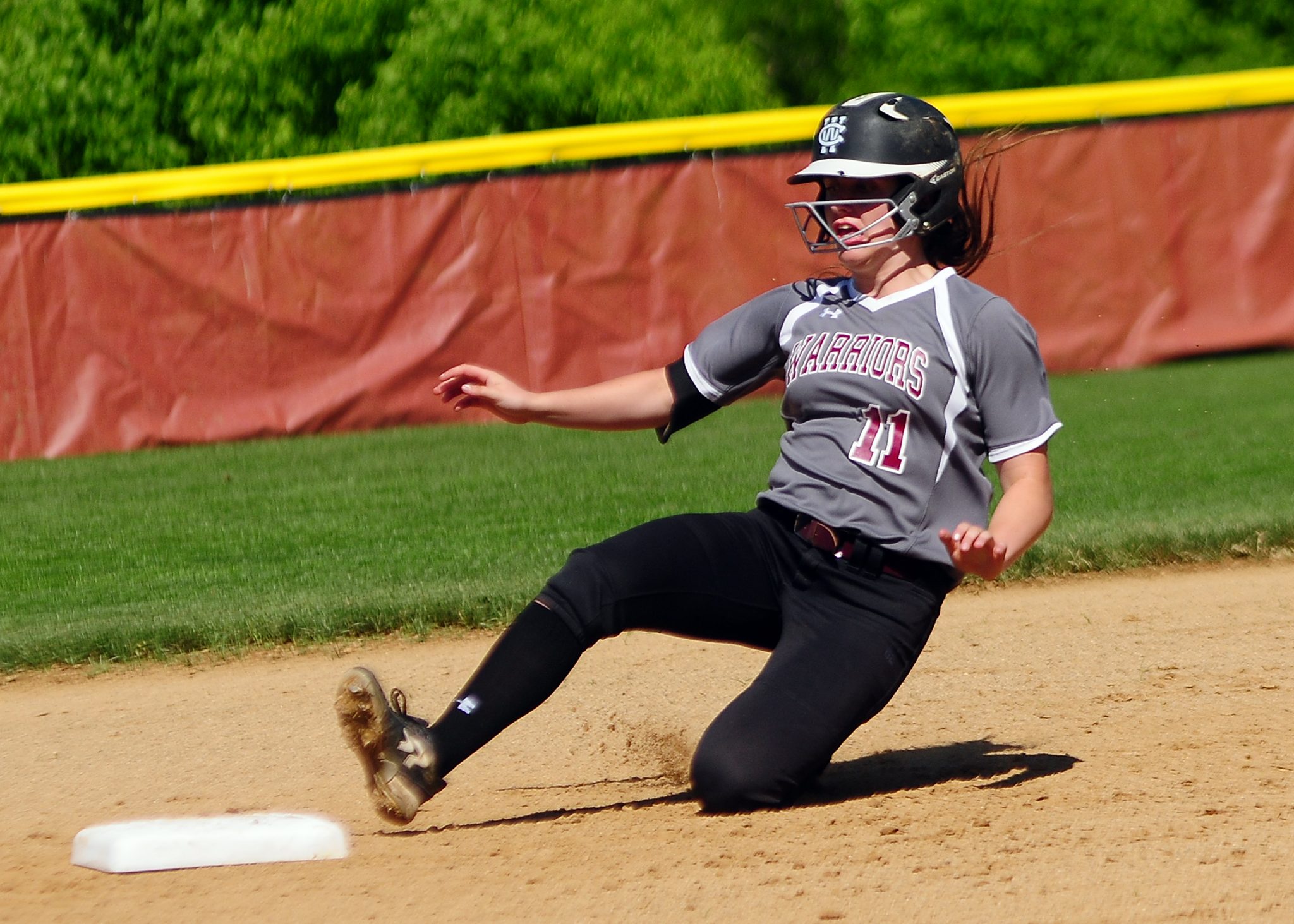 And it paid off in the spring of 2019, her junior year, as she batted close to .500 in Ches-Mont League play while playing either center field or shortstop. For her deeds, she received first team All-Ches-Mont League (National Division) honors.

“Grace is an awesome person, one of the hardest-working people I know,” said Henderson softball co-head coach Chris Hessler. “She was always willing to encourage her friends and teammates. She would help tutor others at school and then she would come to practice and put a maximum effort in.

“After the other players would leave she would ask to do more drills or work out on her own. Grace is committed to doing whatever she can to help the team be successful. There is no doubt that she will be successful in all her future endeavors.”

Despite her lusty hitting in 2019, Abbonizio aimed for more improvement as a senior, focusing on her offensive game last winter.

“I wanted to become more consistent at the plate and improve on my three-tool offense — hitting, slapping and bunting,” said Abbonizio.

Henderson softball co-head coach Joel Cummings added, “In all my years of coaching I have never coached someone who so determined to become the best player she can be. Every time I saw Grace during the day at Henderson, she would always ask me, ‘What are we doing for practice?’ During every practice, Grace literally practiced like it was a game situation, whether it was diving for a ball, running full speed, backing up a player always moving to a position, and throwing a dart to an infield position to get an out. During hitting practice she was zeroed in. She took swing after swing with someone throwing to her in the batting cage, then Grace would go right to a tee.

“Once practice was over she would say, ‘Coach Cummings, can you throw me more in the batting cage?’ After that she would go on the field and practice her base running, trying to reach each bag as fast as she could, while timing her speed. Then she say, ‘Hey coach can you hit me grounders and pop-ups in the field?’”

“In my opinion, shortstop and centerfield have similar leadership roles,” said Abbonizio. “The shortstop is the leader of the infield and the center fielder is the leader of the outfield. Both are required to be extremely vocal throughout the game, whether that be communicating about coverages and plays or cheering on the pitcher.”

Coming into the 2020 softball preseason, Abbonizio kept her game in high gear.

Asked how she viewed her leadership role as a senior on the Warriors’ softball squad, Abbonizio responded, “As a senior, I tried to lead by example. In the few practices that we had, I encouraged the team to work hard and give 100 percent because, after all, you do practice like you play. I believed that if we brought the same intensity that we bring in games to practice, then we would improve immensely.”

Then, on April 9, the PIAA cancelled the spring sports season because of the COVID-19 pandemic.

“I was obviously devastated when I found out that my senior season was cancelled. I could not believe that the one scrimmage I played would be my last game in a Henderson uniform. But in the grand scheme of things, it was best for everyone to stay safe from the virus,” said Abbonizio.

As a freshman, Abbonizio got her West Chester Henderson softball career off to a memorable start, helping the Warriors capture their first District 1 title in program history. That spring, Abbonizio received second team All-Area (Daily Local News) second team honors as an outfielder, one of only two freshmen to receive this recognition. She also received first team All-Ches-Mont League honors.

“Some of my favorite tournaments with the PA Strikers were the Boulder IDT and PGF Nationals,” said Abbonizio.

Asked who has been her most influential softball mentor, Abbonizio mentioned her father.

“He taught me to work hard at a young age, and encouraged me to always put in the extra work when no one is watching because it always pays off,” said Abbonizio. “I am so appreciative of the dedicated mindset that he is instilled at me because it not only helps me with softball, but in all aspects of my life.”

In the fall, Abbonizio will play softball for Drexel University.

“I [chose] Drexel because of the top notch academics, the perfect location, and the softball team,” said Abbonizio. “I will be able to play at a high level while also getting an amazing education. The team is very tight-knit and I can’t wait to be a part of the Drexel softball family. I plan to major in mathematics, hopefully to pursue a career in statistics/actuarial science.”