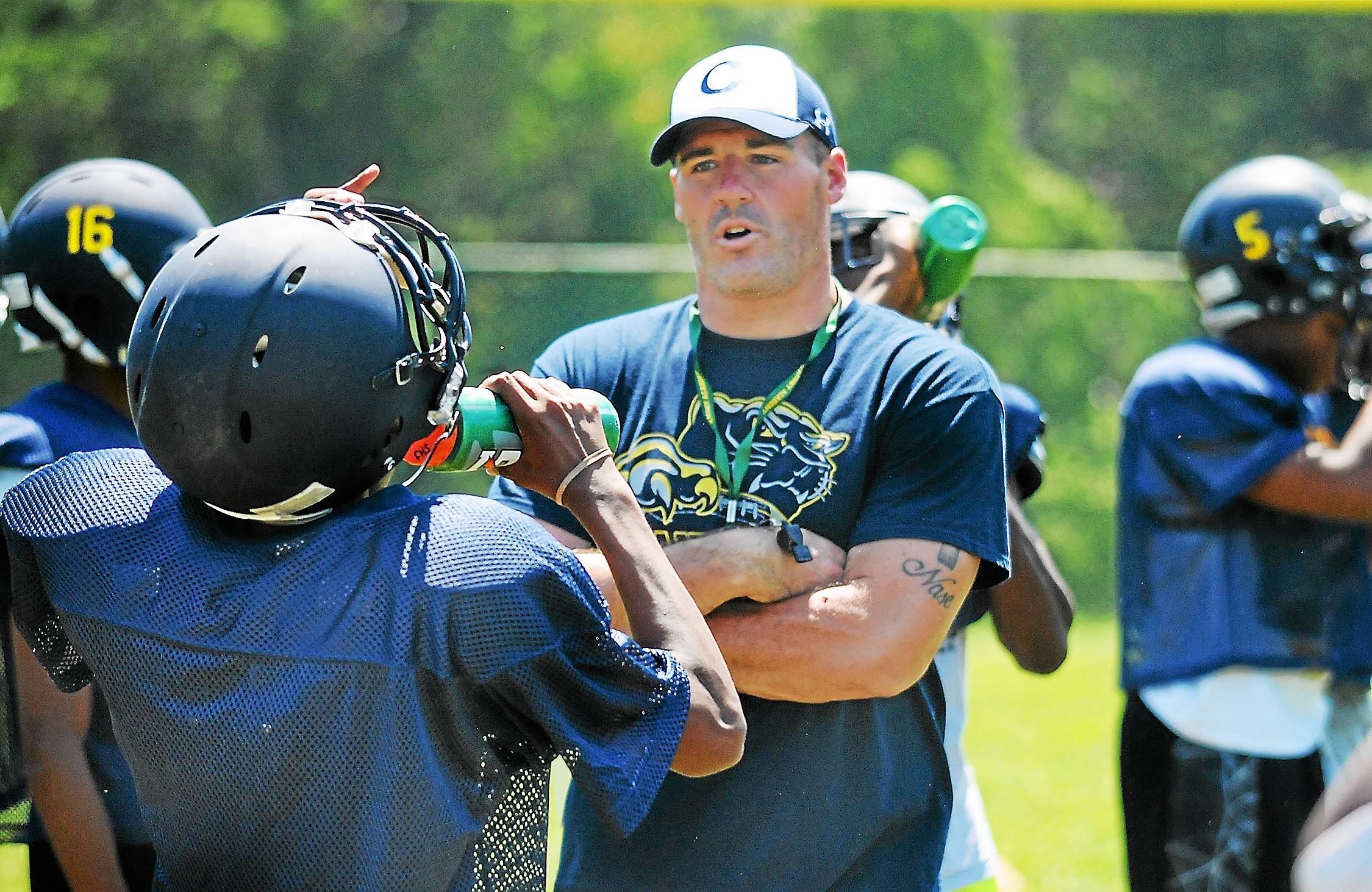 As much as area coaches want to get back to work with their athletes, there’s no point in rushing into it.

On June 10, the PIAA issued a Preliminary School Sports Guidance, clearing the way for high school athletic programs to begin offseason voluntary workouts. While it was essentially a green light to get going,  the PIAA turned discretion on when and how to start up to each individual school district upon completion of a Athletics, Heath and Safety Plan.

For local coaches, it means being patient a little longer as districts figure out the safest and smartest way to get back on the field.

“Our guys are chomping at the bit, so as soon as we’re given a green light, we’re back out there,” North Penn baseball coach Kevin Manero said. “Right now, everything is in the hands of the school districts so hopefully North Penn puts a plan together quickly and we can get out there the safe way and the right way.”

With Montgomery, Bucks and Philadelphia counties still in the “Yellow” phase of reopening, any gatherings of teams would be limited to 25 individuals or less. For outdoor sports like baseball and soccer, plenty can be done while still maintaining social distancing recommendations while sports like football and indoor sports such as basketball may have to alter what they can do at first.

Pennridge boys soccer coach Pete Valimont has been eagerly awaiting the chance to get on the field with his players, but he had to tell them to pump the brakes a bit after the PIAA’s release came out last week. In a normal summer, the Rams would be playing summer league at Lehigh University but with that cancelled, they’re after any opportunity to get on a field together.

“The day it got approved by the PIAA and Governor (Tom) Wolf, I probably had 20-plus emails, text messages and phone calls from players and parents asking ‘can we start tonight or tomorrow?,’” Valimont said. “No one really read in between the lines of all the other things that have to be done to get to the point where ‘now we can go and play.’ We’re excited, we’re close and at the end of the day, whether we’re in yellow or green, it doesn’t matter to me as long as we’re able to get together in some capacity.”

Under the PIAA release, “The plan is to be approved by the school’s governing board and posted upon the school’s website.” Valimont said the Pennridge School District is currently working on its health and safety plan and he’s expecting players and coaches to have some type of online learning program before they’re able to start workouts.

Some coaches and programs, including defending District 1 5A football champion Cheltenham, took proactive measures. Panthers coach Ryan Nase and his coaching staff worked to put together a preliminary plan about two weeks before the PIAA release although they’re also being cautious.

“I feel confident we’re going to have some time before the August 10 start of preseason to get some strength and conditioning in but exactly when that’s going to be, I don’t know yet and my best guess is we’re a couple weeks away,” Nase said. “As much as we football coaches sometimes think it’s only us, it’s not. The band and other fall sports like soccer and tennis want to get back out too so (AD) Sunil Blackwell is doing a great job of talking to all our coaches and putting a plan in place he hopes to present to our school board for approval as soon as possible.”

Much of the western part of PA has moved to the green stage, including DuBois where Manero is spending part of the week watching nine of his players participate in the PBR PA State Games.

“Every part of the state is different right now, I’m in DuBois where you can go into a restaurant, sit down and have dinner but when you go back home, we still can’t do that,” Manero said. “I think it’s good the PIAA left it up to the districts because everybody is in a different situation.

“We are trying to put together a small round-robin tournament later this summer, but we are putting the brakes on that a little bit until we get better clarity on when we can start. We still want to do that because, if nothing else, we want to get our seniors out to play together before they go their separate ways.”

Some local AAU basketball programs have taken to holding workouts across state lines while still adhering to social distancing when players aren’t on the court. Archbishop Wood girls’ basketball coach Mike McDonald noted some players are traveling to places where it’s been deemed safe to play while any open gyms or workouts local teams would conduct will have more restrictive guidelines to follow for the near future.

“When you’re playing basketball, you’re going to have to be close to people so I’m hoping we take that into consideration while doing what we can when they come off the court,” McDonald said. “We can wipe things down, we can take steps like not sharing water bottles and keeping apart when we can control that but my hope is they can still play the sport the way it’s meant to be played.”

The top priority is ensuring the safety of both players and coaches. For now, Nase said he hasn’t put any X’s and O’s work into his action plan, instead focusing on small group strength and conditioning rotations that will allow coaches to clean and fully sanitize stations between groups.

Re-starting sports will require a degree of sacrifice from all parties involved. At the moment, it means not rushing back out on a field or court without a proper action plan and once activities resume, taking measures to keep them going.

“Look, we just missed a whole season so as far as making sacrifices, I think all of us that coach spring sports and play spring sports, we know what it means to sacrifice,” Manero said. “I think everybody’s going to find in their own way how they have to go about doing things. You think about about a baseball diamond, the only time people are really close together is when they’re in a dugout or on the bench and there are ways to spread people apart.

“You’re a lot closer in a Wawa or a Lowe’s than you are on a baseball diamond but every sport has its own unique circumstances. Think about football and what they have to deal with but I believe everybody will figure out what’s best for them.”

Pennridge soccer, thanks to parents and boosters, has stocked up on masks and hand sanitizer so any player that needs it will have access. During the team’s weekly Zoom meetings, Valimont has reminded them to practice safely and get used to how things may change.

“The tough thing is going to be not exchanging a simple high-five or fist-bump that you take for granted,” Valimont said. “You can’t do that stuff. We’re going to do our best to keep everybody healthy, but that is one of the big question marks.”

As history has proven in countless examples, sometimes all the preparation in the world just isn’t enough. There’s still a possibility someone will get COVID-19 and at the moment, there’s no guidelines for what that would mean.

“If a kid gets it, he might get it at the mall, a movie theater, restaurant, wherever but chances are the story will be ‘football player from Cheltenham contracts COVID-19 after the start of workouts’ so that’s what we have to really, really be cautious about,” Nase said. “We don’t want to see that headline and I know no coach in any other sport wants to see that headline.”

The coaches noted guidelines and procedures could rapidly change if counties are able to move from yellow to green, but also on a less structured basis as the summer continues on. Manero said it will come down to districts and teams playing by the rules set forth by those in charge and keeping an eye open for updates and changes.

“It’s either safe to play or it’s not, that’s the way I look at it,” McDonald said. “But everything I’m reading looks like we’re safe to play, we just have to stay on top of it and be a little more alert with what we’re doing when we walk off the court.”

While the light has turned green, nobody wants to be the one slamming the gas pedal without checking the rest of the intersection first. Every extra bit of caution and planning taken now will only help the cause for a 2020-21 season, which is what every coach and athlete is hoping for.

“I hope people start talking about how important it is for kids to get back to sports and as close a normal routine as possible, our kids need this,” Nase said. “I’m not diminishing the seriousness of the pandemic or the social issues that are going on right now that we’ve talked about a lot as a team but our kids need to get back to some sense of normalcy and a high school sports are a great way to do that.”

PBR showcase gives local baseball players a chance to get back on field
SENIOR WEEKS: Unionville’s Folmar misses out on his first, and last, chance to play varsity baseball for the Indians