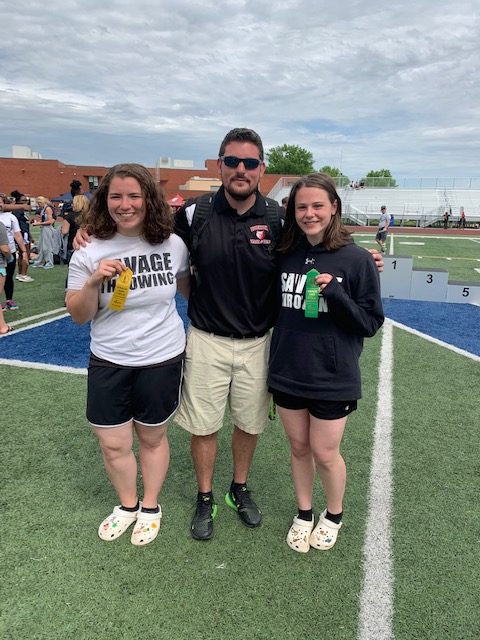 It can’t be said Bianca Martinez doesn’t know how to make up for a late start.

She did it twice during her time at Boyertown High. And the possibility of doing it again in the near future exists.

Martinez served as commander of the school’s Naval Junior Reserve Officers Training Corps (NJROTC) detachment this past school year, a late start in joining the military training program her freshman year notwithstanding. And while being a first-time participant in girls track as a junior, she medaled in the shot put in the only Pioneer Athletic Conference championship meet in which she would participate.

Holding the rank of cadet lieutenant, Martinez was the “top dog” of the detachment’s five leading seniors — also known as “top dogs” — who lead the corps of cadets.

Criteria for being named commander include high academic standing and involvement in other activities.

“I didn’t understand at first what it was about,” Martinez recalled. “But I showed a lot of promise as ninth grader.”

Martinez showed more of her promise at the NJROTC Leadership Academy held in Rhode Island. The academies, staged during the summer in the country’s various areas for more than 25 years, were developed to prepare selected cadets for leadership roles in their respective units by teaching certain leadership characteristics not necessarily available, nor normally taught, at the cadet’s home unit.

The summer of 2018, Martinez was one of four cadets from Boyertown to attend the academy. The next summer, she was in the academy as a “cadet aide,” one of just 16 from the 144 from the eastern United States accorded that distinction.

“It’s a lot harder to get in,” she noted, adding the aides’ primary task is to assist the academy instructors.

Martinez served as a sailing aide; though she hadn’t done any sailing prior to the assignment, she studied and went on to obtain a boating license.

Martinez’s success in track was just as heady. She placed fourth in the 2019 PAC championship meet with a throw of 35-8 1/2, qualifying for the District 1-AAA competition in her first season of competition.

“Shot put’s a natural for me,” she said. It was her exclusive event during the winter season; she did the others (javelin, discus) in the spring.

“Weight lifting helped me build strength for the throws,” Martinez, holder of lifting records for the girls team, said.

Martinez had success during the recent winter track season, emerging as one of three throwers from Boyertown to qualify for the Meet of Champions at Lehigh University. She was joined by Madison Gallagher, who finished sixth with a throw of 37-9 1/2; and Renee Simmonds, who was 13th at 33-2 1/. She was 20th at 30-1 1/2).

“Bianca was an incredible teammate,” her throwing coach, Kyle Dunn-Devine said. “She always supported the team and the throws squad. She made other athletes better in the circle and in the classroom.”

She was looking forward to the 2020 spring season to improve her standing in the throws and exert more leadership as captain of the team’s throwers. But the COVID-19 pandemic, which shut down spring sports and the last months of the 2019-20 school year in mid-March, prevented that from happening.

“She worked her butt off,” Jon Zellers, head coach of the Boyertown girls track team, said of Martinez. “She’s an awesome kid.”

The restrictions on using athletic fields and facilities prevents her from refining her shot-put skills.

“It’s really hard to throw if you’re not in a circle and don’t have coaching,” Martinez said. “I’m presently working to maintain my physical fitness.”

This fall, Martinez will be heading to York College to study nursing and throw shot on track team. She will be the first member of her family to go to college.

“I think I’ll do just shot put,” she said of her track plans. “I don’t want to waste time on other events if there’s one at which I excel. If they (coaches) want me to try other events, I’ll do it.”

“She was very dedicated,” Dunn-Devine added. “She always went the extra mile to be better in everything.”

Martinez also figures to enroll in the ROTC program at York, which covers all the military services. She would choose to go either Army or Air Force because of nursing opportunities.

Additionally, she may look to apply for an R.O.T.C. scholarship after her freshman year.

“I love the lifestyle,” Martinez said. “When I get my course selection, I will make my choice.”