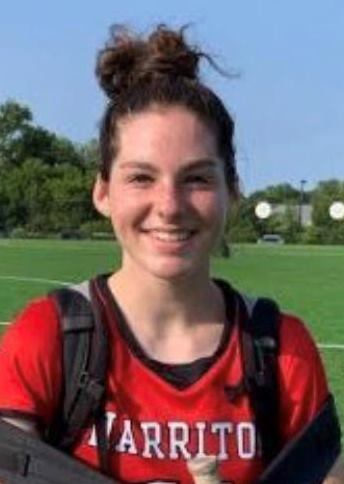 The senior attack/middie and captain was a key force in the Rams capturing the PIAA 3A state girls lacrosse title last spring, scoring 74 goals, dishing out 31 assists, winning 43 draw controls and scooping up 54 ground balls.  Dwyer was selected a USLacrosse Academic All American and was a second team All-Central League selection. She was projected to score her 100th career goal early this spring, and will play lacrosse for Cornell University next spring. A three-sport athlete during her Ram career, she played field hockey for four years at Harriton (and was captain for two of them) and competed in indoor track. Off the field, she is a member of the National Honor Society and Harriton’s Freshman Mentor Program. Harriton girls’ lacrosse head coach Becky Cartee-Haring said, “Even though Lucy was injured last fall, she came to our winter indoor games and was a verbal presence on the sideline and in huddles. She was dedicated to working herself back to playing as intensely as last season. She was always encouraging to all of the players and could motivate her teammates through both her voice and her actions. Her teammates know her passion and know that she is a competitor who wants to be successful and they worked hard, in part, because of her leadership. Achieving a state championship was an amazing experience for her  last year and with her sister, Gracie, playing with her. She worked on her dodging and shooting game prior to last season and became a major scoring threat on the field.  She has left her mark on Harriton lacrosse, and the team she leaves behind there will be carrying her in their hearts once they get back on the field.”

Q: What is your sharpest memory of the PIAA 3A state championship game last spring?

A: One of the main memories from the game that stood out to me was our pregame huddle. I vividly remember our head coach last year, Coach D (George Dick), acknowledging our nerves and telling us that if we each played our role, we would have a great game. I looked at all of my teammates and thought that we were going to play a great game. We were all best friends and had so much trust in each other that we were all going to play for each other. This turned out to be true – we played well and we won a state championship.

Q: What were your goals for this spring lacrosse season? What aspects of your game did you work on most during the off-season?

A: One of my goals was to use the skills that I practiced in the off season in the games. Some of the things I worked on were dodging sequences, double and triple moves and deceptive shooting. I also improved my off-hand by doing wall ball during the time that I was injured and couldn’t run. One of my main goals team-wise was to continue the sense of family in our team culture that our seniors last year brought. Their leadership, inclusiveness and dedication were main reasons for our success last year, and I hoped to continue these characteristics for our team this season.

Q: What are your thoughts about the cancellation of the spring lacrosse season because of the COVID-19 pandemic? Tell us a little about how you handled your leadership role as a team captain in the weeks leading up to the cancellation.

A: I was devastated when our spring lacrosse season was cancelled. I was really excited to play with all of my teammates again, and especially with my sister for one last season. In the weeks leading up to the season being cancelled, I went to every practice and scrimmage. Although I couldn’t play yet, I was always there to support and cheer on my teammates and help the coaches with whatever they needed. I tried my best to make sure everyone felt included and that everyone was having fun.

Q: Can you tell us a little about your injury last fall, and your rehab?

A: I hurt my knee playing field hockey in the fall and required surgery. It was really hard for me because I missed half of my field hockey season, all of indoor track, and I would miss part of the lacrosse season. As a field hockey captain, I learned a lot while being on the sideline. I gained an even greater appreciation for sports and I will never take my time on the field for granted again. I learned that you can still show leadership even while on the sideline, such as encouraging teammates individually or speaking up in team huddles. I am now cleared to play! I am excited to hopefully play with my teammates soon!

A: I started playing lacrosse because both of my parents played lacrosse in college – my mom played at Harvard and my dad at Brown. I was a figure skater until 8th grade, when I decided to focus on lacrosse and I realized why my parents have so much love for the game. Their teammates are their best friends for life because of how team-oriented the sport is, which is why I also love the game. Besides my parents, Coach D and Coach Mongo (Bob Mongelluzi) have been really important lacrosse mentors to me. Coach D saw my potential, taught me a lot about team lacrosse, and helped me develop into a more confident lacrosse player. I also owe some of my confidence to Coach Mongo. He helped me immensely with my stickwork, shooting, and dodging ever since I began focusing on lacrosse in 8th grade.

Favorite book: Call of the Wild.

Person I most admire, and why: “Both of my sisters – Grace has a unique competitive drive and Rose is very creative. I can’t wait to watch them play together for Harriton next year.”

To view a gallery of the Main Line Girls Athletes of the Week from 2013 to present, click here