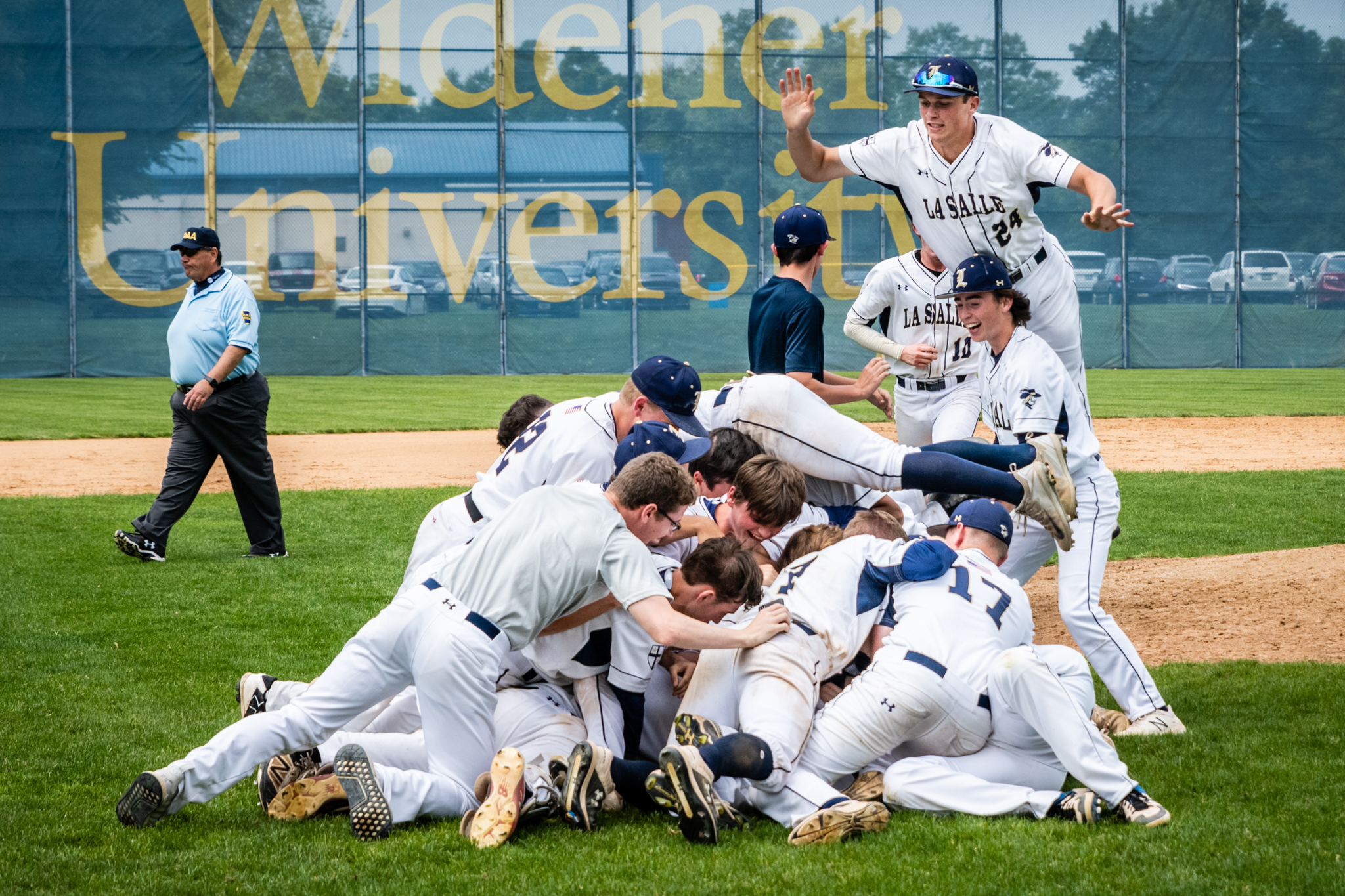 La Salle players pile on one another in celebration after winning the 2019 PCL Baseball Championship over Cardinal O'Hara. (James Beaver/For MediaNews Group)

With the amount of success area high school baseball teams earned during the 2010s, putting together a bracket to figure out The Reporter/Times Herald/Montgomery Media Team of the Decade was not an easy task.

A decade that included a host of state, district and league championships along with a number of stellar individual seasons, whittling down the field to 16 teams meant having a few superb sides finding themselves on the outside looking in.

But just because they could not crack the bracket does not mean these teams do not deserve a bit of recognition so we’re featuring a few of squads that just missed out.

And for those that did make the Team of the Decade Tournament, voting in the first round matchups continue until noon Friday on The Reporter Sports twitter (@ReporterSports).

PW secured its first league title since 2005 – and first outright since 1996 – then as the No. 6 seed in districts bested Avon Grove in second round and upset No. 3 Souderton in the quarters before losing to eventual district champ Neshaminy.

After defeating Downingtown East for third place, PW bounced District 11 champ Liberty 6-4 in the first round of states before its run was stopped by eventual state champ Souderton in the quarters.

2019 La Salle >> The Explorers won their second straight PCL title, lifting the hubcap after a 4-1 victory over Cardinal O’Hara in the final.

Gavin Moretski was named PCL MVP while David Kratz and Owen Lawn were both all-league first-team selections for a La Salle side that went 11-2 in the league’s regular season and finished 18-7 overall.

After claiming the District 12-6A title, the Explorers fell to eventual state champ Souderton 7-1 in the PIAA first round.

2017 North Penn >> The Knights opened the season with eight straight victories and finished the year 20-5 overall and 9-3 in the SOL Continental to edge Souderton for the conference title.

North Penn made the District 1-4A final for the second time in three years, besting three straight PAC sides – Boyertown 6-3 in the second round, Spring-Ford 8-4 in the quarterfinals, Perkiomen Valley 3-1 in the semifinals – before losing to Pennsbury 5-3 in the final. NP’s season ended with a 3-1 loss to St. Joseph’s Prep in the PIAA first round.

The Knights’ 2018 side also gets a nod in the just-missed-out category due to winning the SOL Continental with a perfect 12-0 mark and earning the top seed in the District 1-6A tournament but was upset in their playoff opener 2-1 by Conestoga in the second round.

2016 Christopher Dock >> Dock’s current streak of District 1 championships sits at five with the ’16 Pioneers picking up the second title in the still going run with their Class 1A crown.

Dock went 19-2 that season with no losses in Bicentennial Athletic League play with their two defeats coming to 4A Souderton then District 11 champ Marian Catholic in the PIAA 1A first round.

The Pioneers’ roster that season included Tim DiLoreto (Lehigh), Dan Sabath (Jefferson) and Nolan Bolton (Liberty) and rolled through its two District 1 tournament matchups – topping Plumstead Christian 13-3 in the semis then Jenkintown 10-0 in the final.

2013 La Salle >> These Explorers were sandwiched between the program’s two state titles but the ’13 edition showed they were also a high-quality side.

La Salle went 11-4 to top the PCL Red Division then captured its first PCL title since 2005 with a 4-0 run through the league postseason – rolling past St. Joseph’s Prep 10-0 in five innings in the championship game.

The Explorers took the District 12-4A title with an 8-0 win over Frankford before falling to eventual state semifinalist Pennridge in the PIAA first round.

2011 Methacton >> The Warriors reached the PIAA Class 4A quarterfinals after a placing fifth in the District 1 tournament.

Methacton – which had a pair of PAC first team selections in infielders Joey Casselberry and Nick Strizziere – were edged 4-3 by eventual state runner-up Spring-Ford in the PAC semifinals before upsetting Strath Haven and Pennridge to reach the district quarters. The Warriors lost to Conestoga but bounced back in playbacks, beating Owen J. Roberts and West Chester East to reach PIAA play.

In states, Methacton bested District 3 champ Cedar Cliff 6-2 to make the quarters, where it fell again to Conestoga – the Pioneers going on to win that season’s PIAA 4A title.