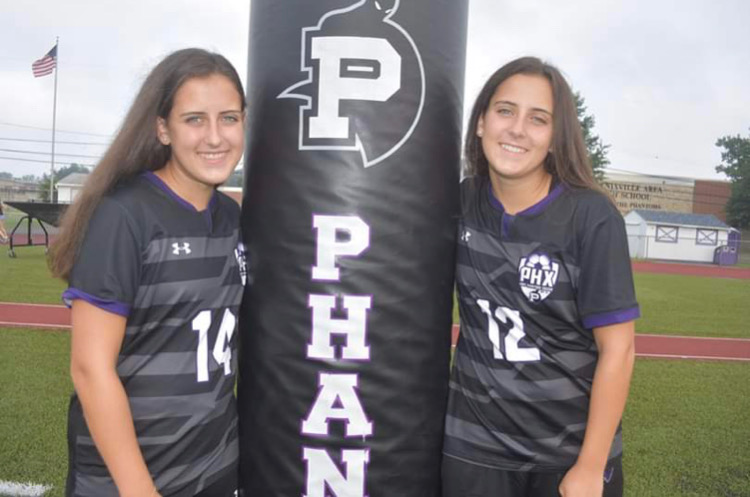 Maddie White can remember one soccer season when she and her twin sister Lily did not play together.

Other than that, the Phoenixville senior soccer and lacrosse players have been with each other on and off athletic fields their entire lives.

“It’s definitely a really special experience to have,” Lily said.

After four seasons playing for the Phantoms girls soccer season and previous three on the lacrosse team, the 2020 lacrosse campaign was set to be the culmination of their time sharing the field before Maddie heads to play at Drexel University and Lily starts her academic career at Northeastern University.

Like many others, the White twins did not get that opportunity as their senior lacrosse seasons were wiped by the COVID-19 pandemic. The next time either steps on the lacrosse field for an official game will be the first time they don’t do it together — let alone be more than 300 miles apart.

The Whites have a side yard where they played soccer and lacrosse growing up and continued to hone their skills against each other when they got to high school.

During this quarantine period, the games have been a saving grace for Lily, Maddie and younger sister Natalie, who played soccer with them for two seasons and was set to join her older siblings on the varsity lacrosse team this spring. It’s usually a toss-up who comes out on top each time.

“It’s really competitive,” Maddie said. “That’s definitely what has pushed me in sports, being able to always compete with my sisters at home.”

“You can do wall ball on your own or drills on your own, but it’s definitely a help to have someone else playing against you at game speed,” Lily added. “She always pushes me and I always push her.”

On the soccer team, Lily played right back, Maddie played center midfield and Natalie played center back, allowing their parents to set up on one side of the field and watch all three of their daughters play.

After sharing the honor together on the soccer team, Maddie and Lily were set to be two of the captains for the lacrosse team together this spring — Lily for the first time and Maddie for the second.

“The two of them work well together,” Phoenixville coach Aamina Thornton said. “It’s almost like they’ve got a sixth sense about what each other needs. Siblings squabble, but more than anything those two were always complementing each other making sure that everyone’s doing OK.

“This would have been their year to show everybody because they were also elected captains, so they were going to run the team as well along with the other seniors.”

Though the twins have shared the field for so long and sharpened their skills against each other, they bring a lot of different attributes to the team.

Thornton said Lily was always the one she could rely on to scoop up a big ground ball and Maddie was someone who helped run the Phantoms offense and also had a nice finish to her shots.

“Maddie is definitely more aggressive,” Lily said. “She’s kind of like a workhorse player. A lot of people describe me as more of a finesse player. I don’t know if that necessarily has to do with our personalities or maybe like the positions that we play but I would say our styles are different. Even though we look the same, our styles out on the field are definitely noticeable and different.”

Maddie, an All-PAC Frontier first team selection a year ago, was closing in on the 100-goal milestone and hoped to eclipse the mark during the 2020 season.

She and her sister were also hoping to help the Phantoms compete for a Frontier Division title this season and earn a trip to the Pioneer Athletic Conference Final Four after finishing second in their division in 2018 and 2019.

“We were all really optimistic about the season,” Lily said. “All of the seniors were really putting in a lot of effort before the season to make sure the team was ready. During the winter league was definitely one of the highlights of this short season that we had because we were all able to bond and then through that experience a lot of my teammates were able to vote us captains.”

“Looking back on it, it’s definitely sad that we didn’t have our whole season but to at least know that we had winter league to win something together one last time, that was nice,” she added.

While Maddie competes for Drexel at the Division I level, Lily said she plans on trying to out for the club lacrosse team when she gets to Northeastern.

Along with their connection on the field, things like pushing each other during workout runs and postgame discussions will be missed next year.

“I’m probably going to miss just feeling like I know I’m really connected with her on the field,” Maddie said. “I feel like we can always work things out. We have that time at home too to talk about stuff that happens on the field and really get to analyze some of the things we get to do on the field together. Not having that person to always be able to talk to and work together with on that level … it’s going to be different.”

Phoenixville senior Lily White plans to attend Northeastern next fall and try out for the club lacrosse team. (Submitted)