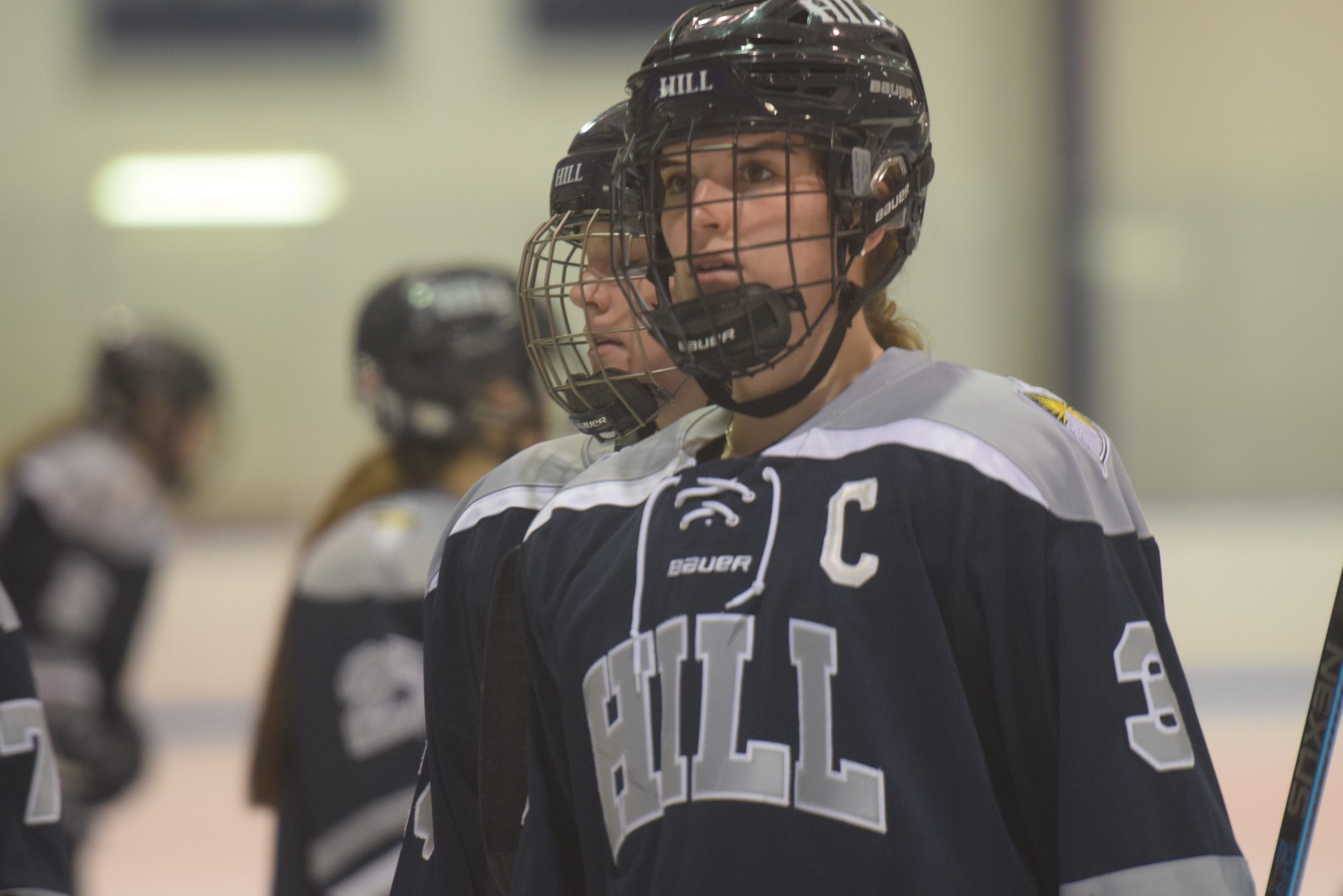 She’s played two sports for the better part of her life.

Enjoyed both of them, too.

Happily for Liz MacMurray, at a time in their lives when most student-athletes have to make a choice of one athletic endeavor in which to continue, she won’t have to make such a decision.

MacMurray will be able to keep playing ice hockey and lacrosse as she moves on to the collegiate level of her academic and athletic careers. Her plans for attending Hobart and William Smith Colleges will include participation in both sports … an extension of a four-year tenure at The Hill School that will end with her graduation this spring.

“She is the true essence of a Hill student-athlete – able to flourish physically, but thoughtful about and engaged in much more than just herself,” said Hill ice hockey coach Ari Baum. “Elizabeth MacMurray is the type of person who will stay forever embedded in the fabric of our program and school community.”

MacMurray started playing both sports at an early age: Ice hockey when she was around four or five, lacrosse in kindergarten. The Chester Springs resident participated in both through her childhood years, her time as a student at Owen J. Roberts Middle School and her enrollment at The Hill … and found numerous similarities between the two athletic pursuits.

“You definitely have to be in shape, and have endurance,” noted MacMurray, a forward in ice hockey and middle forward in lacrosse. “It takes a lot of running work to stay in shape. You need instincts, and to be quick.”

Another similarity was MacMurray’s excellence in both sports. She was named a captain of both teams; in hockey, that was a result of the persona she brought out on the ice.

“Elizabeth was a top-nine forward in each of those seasons,” Baum noted, “an incredible presence on and off the ice, culminating in her captaincy as a sixth former. Her physical contributions factored in significantly, but it is her presence and care that have ultimately defined her Hill career.”

“Liz is a leader for our lacrosse program on and off the field,” Hill girls’ lacrosse head coach Marcela Gaitan added. “Officially named captain, she doesn’t need the title to get her peers to buy in. Her attitude and perspective on the field in a game is something any coach wants. Her presence in our program and on campus will be one not easily filled.”

MacMurray had high aspirations for the 2019-20 school year. They were realized during the winter, the Blues compiling a 21-3-3 record capped by a 4-0 run through the inaugural Hill Tournament — a combined 20-6 scoring edge in the games — that closed out the season.

“It was a more exciting thing at the Hill, having a competitive hockey team,” she said. “The growth of the program is tremendous, amazing.”

In her four years, Hill hockey compiled a 99-33-9 record, becoming one of the premier prep school girls’ hockey programs.

MacMurray was hoping for an encore performance during lacrosse season, the optimism bolstered by the fact the team had a large number of ice hockey players out. But with one scrimmage against Agnes Irwin in the books, the Hill’s season was shut down by the COVID-19 pandemic.

“I was devastated,” Liz said. “We came out of hockey on a super high note. We felt it was going to be a breakout year with one of best teams the school ever have. I was excited for actual game days.

“We’re staying involved in Zoom and social media connections with teammates. We’re trying to being proactive about it.”

MacMurray is spending the current “down” time working out with younger sister Megan, a freshman, on drills, running and workouts.

“We push each other, working on skills, running and staying in shape,” she said.

Inspiration on the ice comes from within the family. Liz is a cousin of Charlie Coyle, an 11-year professional who’s played forward for the National Hockey League’s Boston Bruins since 2019 after six with the Minnesota Wild.

“I grew up wanting to be like Charlie,” she said. “I saw him after games with the Philadelphia Flyers. I wore his number (3) for a time.

At Hobart and William Smith, a private liberal arts college located in Geneva, N.Y., Liz joins a lacrosse program ranked among the top 10 in NCAA’s Division III. Academically, she is looking to study history and political science in hopes of going pre-law.

Her athletic aspirations beyond college could head in a different direction.

“I can see myself coaching,” she said. “I think I’d be good at it eventually.”

Whatever course MacMurray may follow in the future, her standing in the annals of Hill School academics and athletics is solidly established.

“She is destined bring the same energy and dedication to Hobart and William Smith college with both the hockey and lacrosse teams,” Gaitan said. “We cannot wait to follow her continued accomplishments.”

SENIOR WEEKS: Westtown’s Barth focuses on future in nursing after COVID-19 erased her senior lacrosse season
SENIOR WEEKS: Captain Murray was looking forward to her chance at leading Villa Maria as a senior