DLN ALL-AREA: Unionville goalie Robitzer proves to be worth the price of admission 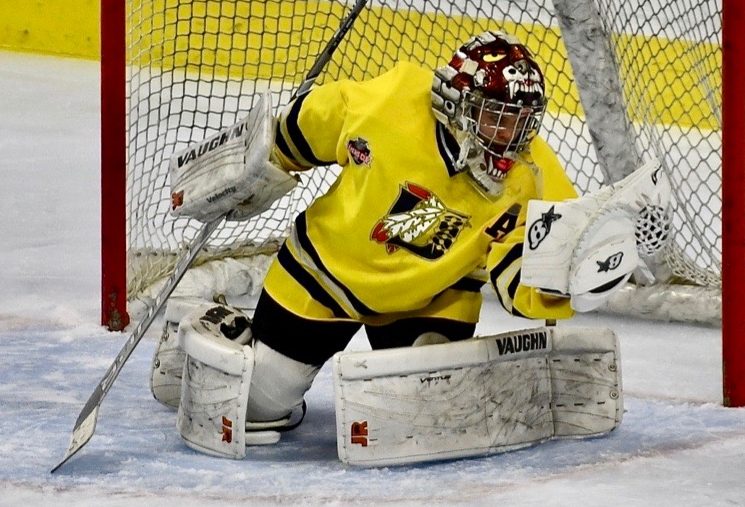 Ask most hockey players and they will say that the biggest thrill comes with scoring a consequential goal. But for Unionville’s Mattie Robitzer, the rush comes from preventing one.

“I love making a big save,” she said.

And Robitzer did plenty of that during the 2019-20 season at Unionville. The sophomore goaltender actually enjoyed facing a barrage of shots, was a major force in leading the Indians to the ICSHL title game, and has been selected the Daily Local News Girls’ Ice Hockey Player of the Year.

“Teams put a lot of shots on her and she wasn’t giving up much at all,” said Bishop Shanahan-Downingtown East head coach Jeff Wallace. “Her save percentage had to be off the charts.

“Mattie’s work ethic is special and her focus is second to none. She just does not want to be scored on.”

The raw numbers drive home to point. In 19 high school games, Robitzer turned aside 706 shots, which averages out to more than 37 per game. And her save percentage of .943 is almost otherworldly.

“To be a good goaltender, you have to have the right mindset,” Robitzer pointed out. “You have to have a short memory. If you get scored on, you can’t let it get to you. You have to move on and stop the next puck.”

In all, she helped Unionville go 12-5-2 with a miniscule 2.24 goals against average, and was named to the All-ICSHL First Team.

“We lost a lot of seniors, so it was a new group,” Robitzer said. “I did face a lot of shots, but it is fun. This was a great group to be with and we made it to the league finals, which I don’t think any of us expected to happen.”

Robitzer, and her twin sister Lily, started playing hockey back in Kindergarten.

“We have close family friends who also have twin girls a couple years older than us,” Mattie explained. “Lily and I saw them playing hockey and we said, ‘that’s so cool – we should try that.’”

For the first couple seasons, Mattie played on defense. But at age eight, when a goaltender was first introduced, she was drawn to the position.

“Everyone had to take a turn at keeper and when I got my turn, I just fell in love with it,” she said. “I have been a goalie ever since.

“For me there is just great satisfaction making a save. It’s like ‘wow, I just did that.’”

Robitzer played co-ed hockey until switching to all-girls club hockey at the age of 12. That’s where she met goaltending coach Michel Larocque. The former NHL netminder and Boston University star allowed her to develop her own style in the net and Robitzer began to flourish.

“He is just amazing,” she said. “He is so much fun to work with. With a lot of goalie coaches, you have to do things a certain way. But (Larocque) figures out your strengths and works with you to be the best you can be.”

For the first time last fall, Robitzer moved up to the Junior Flyers Tier I club team. She split keeper duties and was a major piece to the puzzle of a team that went 67-8, which included an amazing unbeaten streak that lasted from October into February.

That season provided a springboard into the high school season for Robitzer. Now she was the lone goalie with a lot more pressure on her shoulders.

“With the Junior Flyers, it’s pretty competitive and I rarely saw more than 20 shots a game,” she recalled. “At Unionville, it’s different, but kind of fun to face 60-70 shots. I like to feel that kind of pressure.”

When asked about her style of play, Robitzer mentioned former NHL great Dominik Hasek as well as current standout Marc-Andre Fleury of the Vegas Golden Knights. Both are known for their aggressive play.

“I am kind of all over the place – I rely on my movement,” she said.

A resident of Kennett Square, Robitzer acknowledged that once the hockey season starts: “it’s pretty much hockey non-stop for me.”

A typical week at the height of the club and high school season is dotted with practices and games pretty much every day of the week for months.

“Hockey pretty much is my life. But I love it,” she said.

“I would really like to play college hockey someday, but I’m not sure at what level.”