Springfield warms up just in time to beat Lower Dauphin 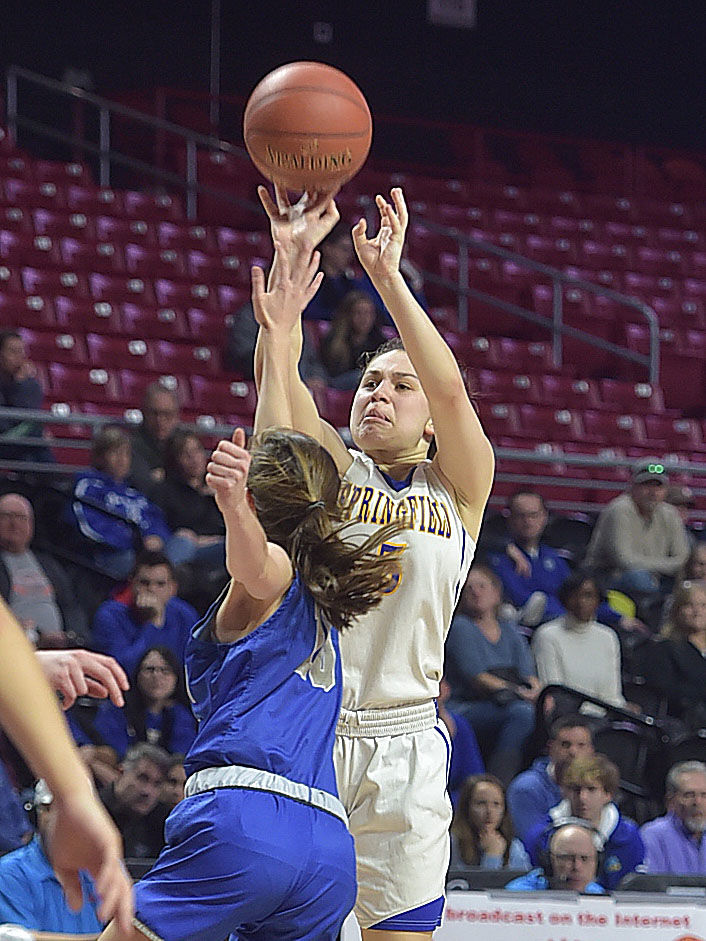 Alexa Abbonizio's layup in overtime helped Springfield earn a 34-31 decision over Lower Dauphin in the first round of the PIAA Class 5A tournament.

PLYMOUTH MEETING — One of the teams that took part in the PIAA Class 5A girls basketball tournament opener Saturday at Plymouth Whitemarsh High shot 25 percent from the floor and had less than 10 percent accuracy from behind the arc.

That team also did not reach double figures in scoring in any of the four periods or the one overtime period that was played. Despite those numbers, when all was said and done, that team, District 1 champion Springfield, survived with a 34-31 victory over Lower Dauphin, District 3’s eighth-place finisher.

With the win, the Cougars (22-4) advanced to a second-round matchup Wednesday night with Mechanicsburg (25-3), District 3’s No. 3 seed which rolled to a 58-17 win over Friere Charter of the Philadelphia Public League and earlier in the season claimed a 47-38 decision over Lower Dauphin.

“We didn’t shoot the ball very well, so we had to find other ways to win,” Springfield coach Ky McNichol said after her team went 9-for-35 from the floor. The Cougars were 2-for-16 in the third and fourth periods but managed to make two of the three field-goal attempts they got in overtime.

“We were down seven (entering the fourth period), and I couldn’t be prouder of the way we came back. I think they finally realized that they weren’t ready for their season to end.”

“We picked up our defensive intensity in the third period,” McNichol said. “And our two freshmen gave us some great minutes.”

McNichol was referencing Mia Valerio, who had an overtime basket, three rebounds and played solid defense, and Aaron, who pulled down two missed shots. Meanwhile, Carli Johnston (six rebounds, three steals), who didn’t have a field goal, made a foul shot to cut Springfield’s deficit to three points with 4:20 to play, then made a steal which led to two free throws from Jordan Postiglione (seven points, two rebounds, two steals).

Justyce Hollenbach got her only field goal to put Lower Dauphin back on top with 1:30 left, then Abbonizio countered with a driving layup. Rachel Conran and Hollenbach exchanged steals before the horn sounded and the teams prepared for overtime.

“If I wasn’t hitting shots, I had to do something to help us win,” Conran said. “There was no way this was going to be our seniors’ last game.”

Valerio scored after a steal by Alyssa Long in the first minute of the extra period.

“Things were a little hectic,” Long said. “I was trying to force a steal. We know that so much of what we can do on offense comes from what we do at the defensive end.”

Junior Lauren Kirsch (17 points, seven rebounds) wasn’t finished with her outstanding shooting performance and drilled her fifth 3-pointer to give Lower Dauphin the lead – and its only points of overtime – with 2:25 to play.

Conran then missed a pair of free throws before Postiglione hit one try from the line with 1:18 to go, pulling Springfield even.

The Falcons turned the ball over with just over a minute left, and Springfield’s final shot was an Abbonzio layup with 13 seconds showing on the clock. Long’s foul shot after an LD turnover six seconds later set the final score.

Long was a freshman member of the 2017 Springfield team, which advanced to the second round of the state tournament. She’s like to go farther.

“Only the seniors on this team knew what it was like to win the first game before today,” Long said. “We understand we’ve got to hit more shots than we did today to advance again. I’m sure that’s what we will be working on when we get back to practice Monday.”

Liberatoscioli hits free throw with no time left to send Great Valley to Sweet 16
West Chester East, in states for first time since 2002, falls to Gettysburg