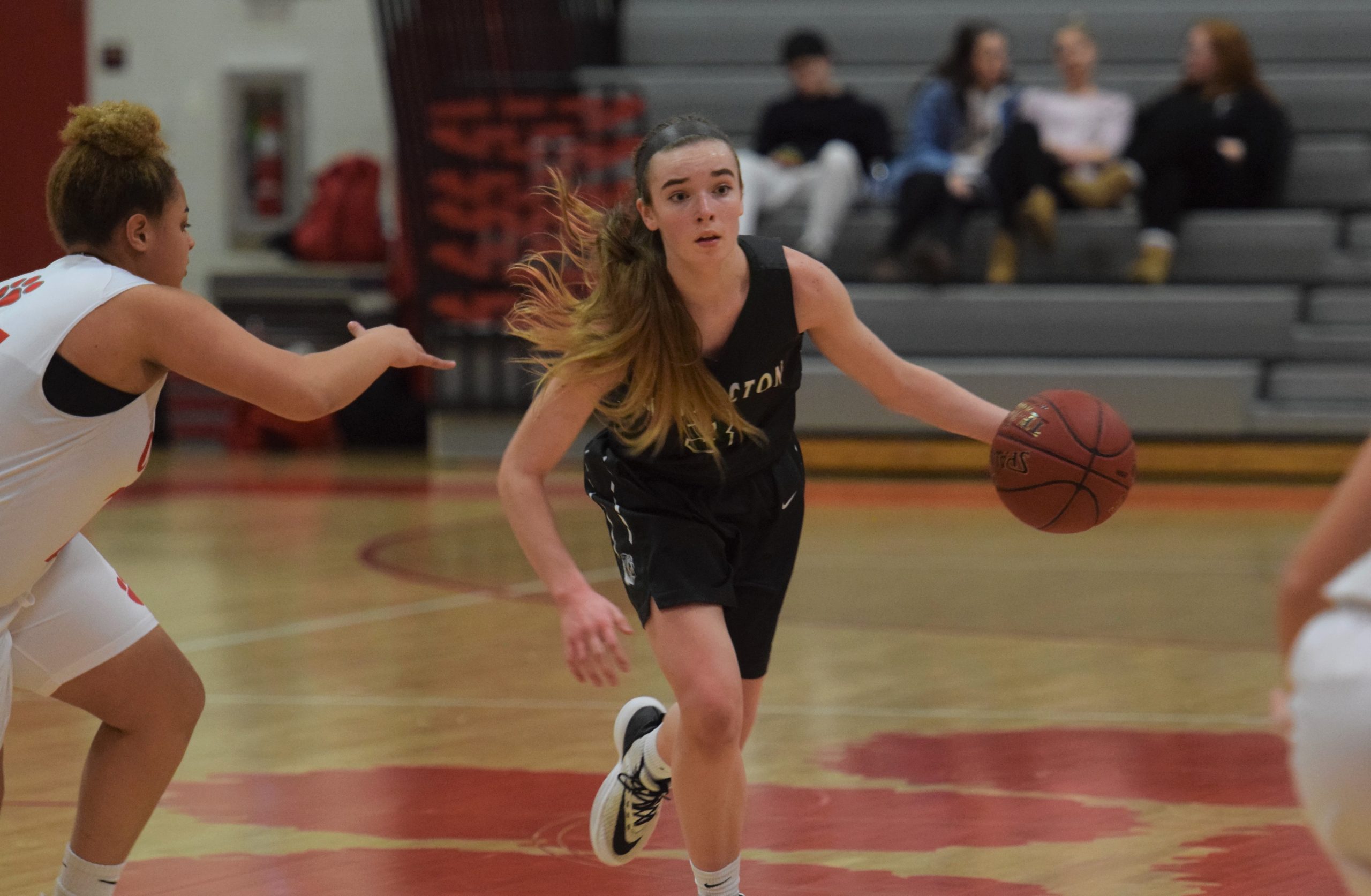 Methacton guard Cassidy Kropp, pictured, and brother Owen are one of the three pairs of siblings on the Methacton basketball teams. (Austin Hertzog - MNG File)

There’s been a buzz around Methacton High School this winter sports season about not just one, but two of the Warriors’ athletic teams.

Methacton’s girls and boys basketball squads are both in the midst of two of the best seasons in each of their respective programs’ histories.

Along with their shared success, making their seasons even more special has been the family connection between both teams as three sets of siblings — Owen and Cassidy Kropp, Nicole and Erik Timko and Cole and Sydney Hargrove — are making their mark for their respective teams.

Those seasons will continue this weekend in states as the girls team takes on Central York at West York High School at 6 p.m. on Friday, while the boys play Harrisburg at Norristown Area High School at 7:30 p.m. on Saturday.

“It’s fun for both of us,” said girls senior Sydney Hargrove, whose brother Cole is a sophomore on the boys team. “It’s just a really intense season for both teams and both teams are doing really well, so it’s exciting to share that moment with siblings.”

“It’s always a good experience to be on a team of this caliber, and when they’re doing it at the same time, you make a lot of noise,” said boys senior Owen Kropp, whose sister Cassidy starts as a freshman for the girls. “Boys and girls basketball, a lot of people are talking about both of our teams.” The entwined paths of the two teams started before the season when the Methacton gym floor had to go under renovation.

Without a home floor for the first month of the season, the Warriors played three double headers on the road. When the Warriors’ shiny new floor opened at the start of the new year, the teams shared the same venue two more times.

For three families who usually have to pick and choose whose game they will attend, it made things a whole lot easier for a few nights this season.

“Yea they definitely enjoyed that,” Owen Kropp said. “It was easy to see both of us, especially at the beginning of the season since they wanted to see both teams, see my sister’s first year playing, and my last year playing, so it was really significant for them to be able to see both games in one night.”

The Methacton girls (23-5) won 20 of their 22 games during the regular season, including a victory over Spring-Ford for the first time in since the 2016-17 season. After advancing to their second straight Pioneer Athletic Conference title game, the Warriors played their way into the District 1 quarterfinals for the first time in 12 years and second time in program history.

Methacton’s boys (26-2)also won 20 of their 22 regular-season game before winning their third straight PAC championship earlier this season. The Warriors added the program’s first District 1 title to their resume with a victory against Cheltenham last Saturday, breaking the school record for wins in a season as well.

“It’s cool to be able to see them do well and us do well too and share that moment,” Nicole Timko said. Methacton’s Sydney Hargrove rises over Boyertown’s Amber Marburger to tip the ball away during the first half of their PAC playoff game Feb. 6, 2020. (Austin Hertzog – MediaNews Group)

During the season Methacton’s boys and girls often played on the same night, preventing them from watching each other’s games, other than a brief peak into the gym during those double headers or if possible a Saturday game.

As the two teams started their respective playoff runs, the siblings have often been able to show their support in person as the PAC and District 1 tournament boys and girls tournaments were played on alternating days.

Owen Kropp said he, Erik Timko and fellow seniors Jeff Woodward and Brett Eberly have made an effort to make sure as many of their teammates as possible are at the girl games, notably lining the front row for the PAC championship game at Spring-Ford. Cassidy Kropp said the boys team has helped recruit fans to the girls games this year, posting their game times on snap chat and other social media.

Many of the girls returned the favor, making the trek down to Temple University for the boys district semifinal after practice last Tuesday, despite having a playback game of their own the next night, and then taking the trip down to North Philadelphia again four days later for the championship game.

“I feel like the support, especially this year, has been equal between both teams,” Sydney Hargrove said. “Because we have siblings on the team and both teams are doing well, you have to support each other.” The Hargroves, Timkos and Kropps all have basketball memories from growing up with each other.

Even this summer, Owen and Cassidy Kropp spent time playing one-on-one or competing in dribble contests in their driveways as Owen prepped for his final high school season and Cassidy prepared for her first.

Sydney Hargrove said her driveway games with her now 6-foot-5 younger brother ended long ago when Cole hit a growth spurt and shot up past her around eighth grade.

Nicole Timko, who is two years younger than Erik, remembers attending her brother’s games and practices when he was playing for the Audubon Recreation Association team because her dad was one of the assistant coaches. Now, the two are sharing the stage as two of the top players in the PAC, with Erik leading the league in scoring at 20 points per game on the boys side and Nicole, in her second year at the varsity level, in second on the girls side at nearly 16 points per game.

“It’s pretty cool, and I know she has a lot more to come and I know she’ll get better these upcoming years as well and progress even more,” Erik Timko said. “It’s special seeing her play well and play with the confidence she’s playing with this year.”

As both teams open up state tournament play this weekend, they would like to continue their special seasons as long as possible.

The girls, who earned one of District 1’s top eight seeds for the first time in 12 years, haven’t won a state playoff game since advancing to the PIAA Class 4A quarterfinals in 2008.

Methacton’s boys have their eyes on the standard they set last season when they advanced to their first state quarterfinal.

“If we can both go deep in states, it would be great for the school knowing we are the best teams ever,” Cole Hargrove said.