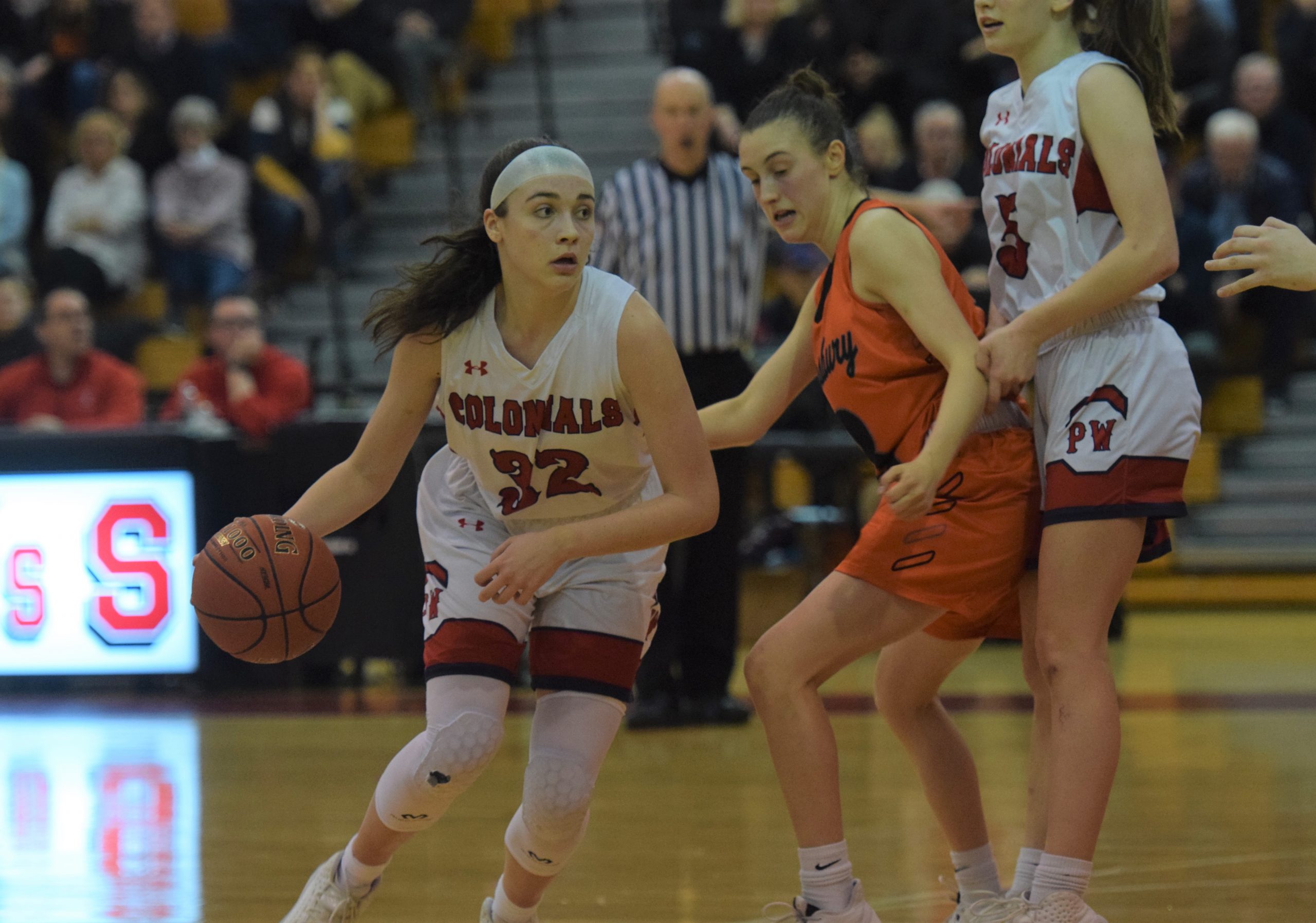 A season ago, a young and inexperienced Plymouth Whitemarsh girls’ basketball team exceeded expectations and won itself a spot in the PIAA 6A tournament, going toe-to-toe with Cardinal O’Hara before falling a few possessions short. With almost the entire team back, plus a few new additions, states became a goal and not an added bonus for the Colonials.

Behind the trio of captains Anna McTamney, Kaitlyn Flanagan and Gabby Cooper, PW’s intensity and edge is as sharp as ever heading into Friday’s state opener against Pocono Mountain West.

“We’re pretty excited to go through this experience again,” McTamney, a junior forward said. “We’re able to able to go into this first round of states not worrying about any game after that because we know it’s about getting through that game first.”

At practice Monday, the team was split in half for a drill that had any missed foul shot followed by several sprints up and back the length of the court. When the other half – composed mostly of younger players and reserves – had to run, the three captains clapped and offered encouragement until the last runner was done.

McTamney didn’t have the luxury of working her way in, inserted into the starting lineup just four games into her career with a lineup that featured a senior trio in Taylor O’Brien (Bucknell), Lauren Fortescue (Salisbury) and Ali Diamond (Georgetown lacrosse) that had designs on a deep state run. The forward was a natural fit and has started the last 80 games with PW.

Flanagan, the team’s sophomore point guard and Cooper, a junior guard, were two of the newcomers into the Colonials’ roster last winter. PW, with three freshmen among its four new starters, was able to grab the 10th spot out of District I for an extra game and the invaluable experience that came with it.

Both have been breakout players this season, where the Colonials not only intended to return to states but compete for SOL American and District I titles. It also helped greatly that their fall season went so well and both guards started basketball practice with plenty of confidence.

“We were so excited about getting past the first round of districts for soccer that the energy carried over into the winter season,” Cooper said. “That first state game last year, at least for me, it was kind of hectic and I was a little nervous but I think having been there, it will ease the pressure this time.”

“We play next to each other the entire season, fall and winter, so it builds trust,” Flanagan said. “I know she has my back and I have hers.”

Half of a stout back line that registered 14 straight shutouts in the regular season and propelled the Colonials to a district playoff win, Cooper and Flanagan are defense-first. It’s the right mentality on the basketball court as well, were PW looks to lead with defense and let everything flow from there.

“For me, I’m more of a defensive player anyway,” Cooper, a 6-foot guard with a 6-foot-4 wingspan, said. “The defensive work in soccer fuels me in basketball. The defensive end creates offense for us so the more energy we have on defense, it contributes to the offensive end.”

PW will need that defense to be at its best against a veteran Pocono Mountain West team. Senior Aiyanalee Owens, a 6-foot-2 forward is at the middle of a senior-heavy squad that likes to play fast behind senior guards Caroline Weirich, Paige Knecht and Taliyah Malone and junior Azahni Simmons.

Injuries have hit PW at the wrong time and the Colonials’ three captains have played nearly every second of the postseason. McTamney said it’s certainly not ideal, but as the leaders, it falls on the three of them to push through any fatigue, fill in the gaps the absent teammates have left and continue to set the example for everyone else.

“They’re definitely missed, they’re a big part of this and are huge assets to our team,” Flanagan said. “At the same time, we have a short-term memory about it and said we were going to do the best we could with the players we have on the floor.”

Most of the time, McTamney, Flanagan and Cooper have a stone-faced and focused look on the court. But, any time a teammate hits a big shot or draws a foul for an and-one, McTamney doesn’t hold back in celebrating it.

Whether it’s on defense, where they’re relentless, in transition off a stop or rebound or attacking the rim, the Colonials play with great energy. PW’s three captains don’t know any other way and even with the stage changing to the one-and-done state tournament, they aren’t going to change it now.

“What’s been surprising most for me is how much energy we had, even in the regular season,” Flanagan said. “We came out feeling more like we were the aggressors, going on the offensive and trying to set the pace of the game at our speed.”

“We take our fuel from each other,” Cooper said.

“I think it definitely comes from each other,” McTamney said. “We hype each other up, it seems like it’s always there. Starting the season 17-0, we wanted to keep going and keep playing well together. I want to continue to do that.”