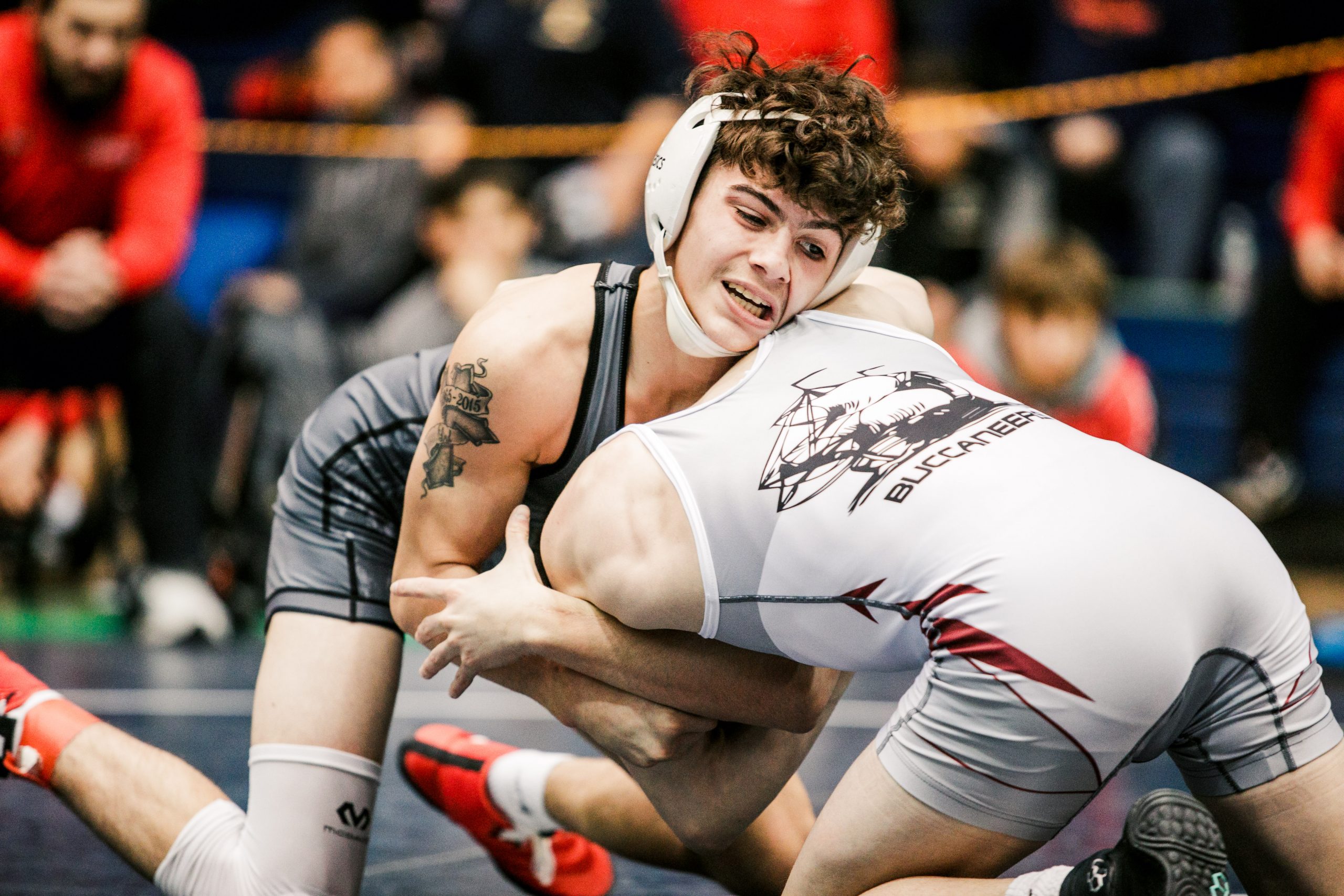 Nikolas Christine had a simple goal for the Boyertown wrestling team that went out on the mats this winter.

“We want to be one percent better than yesterday,” was Christine’s pre-season pronouncement for the program he was taking over late in 2019. It appears the Bears took their new head coach’s goal to heart, as evidenced by their post-season showing to date.

Boyertown will take a seven-man contingent to Souderton this weekend for the South East AAA Regional tournament. It is coming off a stellar showing at the District 1-AAA North Section competition last weekend, one highlighted by three individual champions out of seven advancers and a runner-up finish in the team standings.

“A lot of people are peaking at the right time,” Christine said during the team’s final regional tune-up practice Thursday. “This is the time of season you want them to do that. We did our best wrestling at districts, and we’re hoping to carry it on this weekend.”

Julien Maldonado (113), Chance Babb (126) and Alan Alexander (170) led Boyertown at districts with gold-medal outings. All three were previously regional qualifiers, and they’ll be looked to on the way to getting to next weekend’s state action at Hershey.

Maldonado (27-6) is going for a third regional medal, looking to improve on last year’s third-place finish at 106. He claimed eighth place at states last year, and he is closing on the 100-win mark for his scholastic career, currently standing at 94.

“I want to do better than eighth,” the Bear junior said. “I’m hoping for high finishes at regional and states.”

Maldonado started off districts with a pair of pins in the first minute. He then outlasted UP’s Matt Martin 7-5 in their title bout to repeat as district sectional champ after winning at 106 as a sophomore.

“I tell the other guys, in these tournaments, to go out, do your best and have fun,” the Bear junior said. “Watching videos of opponents is very helpful for me, knowing what to do and how to set up.”

“Seven kids going to regional … it’s a lot better than I thought we’d have.”

Babb (22-8) beat the clock to pin Souderton’s Tyler Geiger in last weekend’s finals, 5:52. He had a pin and decision in earlier bouts.

“From the finals, I knew I need to work on things on top,” Babb said. “I’m good getting back points, but now I need to focus on the bottom.”

For this year’s regional, the sophomore is looking to employ lessons learned from his 2019 trip.

“Not allow back points,” he said. “I also was nervous last year. I have a better seed this year, and with it better expectations”

Like Babb, Alexander is currently 22-8 and was a regional qualifier his freshman year. He outlasted OJR’s Austin Boaman in the district final, 5-3, after scoring decisions (one major) in earlier rounds.

“I did really good against Boaman,” Alexander said. “I had a (5-3) overtime loss during the season. I know I can beat guys at the top level.”

Boyertown’s regional-bound contingent is rounded out by senior Noah Fisher, juniors Anthony Bauer and Jimmy Sinclair and sophomre Luke Heimbach. Fisher and Bauer were silver medalists in their respective 145 and 220-pound brackets, Heimbach was third at 106 and Sinclair fourth at 182.

Joey Milano stands as the PAC’s lone defending regional champion. The junior 182-pounder will look to retain his crown while leading Spring-Ford to a higher finish in the 2020 South East AAA ranks.

The Rams’ surging season has them taking 11 wrestlers to Souderton, and looking to qualifying as many of them as possible for next week’s PIAA Class AAA tournament at Hershey. They’re also bidding to improve on last year’s third-place team finish and five medal-round finalists, four of whom made it to states.

It’s part of a season-long run highlighted by an outright PAC regular-season championship, District 1 titles in the AAA North Section and AAA Duals tournaments, and four other district sectional champs alongside Milano.

“The coaches worked with us for the post-season to be there mentally,” Milano said after capping his third sectional championship. “We knew we had kids who would step up … work hard and be determined.

Owen J. Roberts will continue its own surge at Souderton, with the goal of advancing as many of its own six-man contingent to Hershey.

Leading the way for the Wildcats will be seniors Antonio Petrucelli and Connor Quinn. They are coming off respective 1-AAA North championships at 145 and 160. Last season, the duo claimed second- and third-place medals at the regional and made the trip to Hershey, where Petrucelli placed fifth at 138.

P.J. Kakos is in position to become the latest grappler from The Mercury coverage area to reach 100 career victories. The Perkiomen Valley senior comes into the regional weekend with 98 wins; he will be only the Viking program’s fourth triple-digit achiever, the first since Nick Giangiulio (Class of 2014).

Like Boyertown’s Maldonado, Methacton senior Roman Moser is six wins away from 100 for his scholastic career. Moser was a silver medalist in the sectionals’ 160-pound weight class, edged by OJR’s Quinn in a 1-0 final.

Three Pope John Paul II wrestlers will be looking to advance to the 2020 PIAA Class AA Tournament next week through regional action this weekend. In a change from recent years, however, the site will be Bethlehem Freedom instead of Wilson -West Lawn.

Matt Delciotto leads the trio of Golden Panthers into the post-season’s next stop. The PJP senior will open the regional against Delone Catholic’s Tad Neiderer in AA’s first round Friday.

Delciotto (10-9) was a district silver medalist at 160, ultimately blanked by Conwell Egan’s Todd Hartman in the 160-pound championship.

Cole Miller, a freshman (9-13), placed third at districts with a 12-4 major decision of Springfield Townsihp’s Will Horn. His first regional opponent will be Nolen Ziegler of West Perry.

At 285, sophomore Blake Fisher (13-6) was third in the district after a second-period pin of Faith Christian’s Joshua Stump. He will open the regional against Adam Dandridge of Eastern York.

NOTES >> Souderton High School in particular, and its gym specifically, will be a busy place today. The girls basketball team will host Owen J. Roberts in a District 1-6A playoff ninth-place game at 1:30 p.m., then making the switchover for the wrestling tourney’s 5:30 p.m. start. … Quarterfinals will follow first round at approximately 8 p.m. Saturday’s action kicks off with first-round consolations at 9:30 a.m., with medal-round matches set for 6 p.m. following awards presentations and Parade of Champions starting at 5:30 p.m.