De George: Methacton’s first district final is one to remember 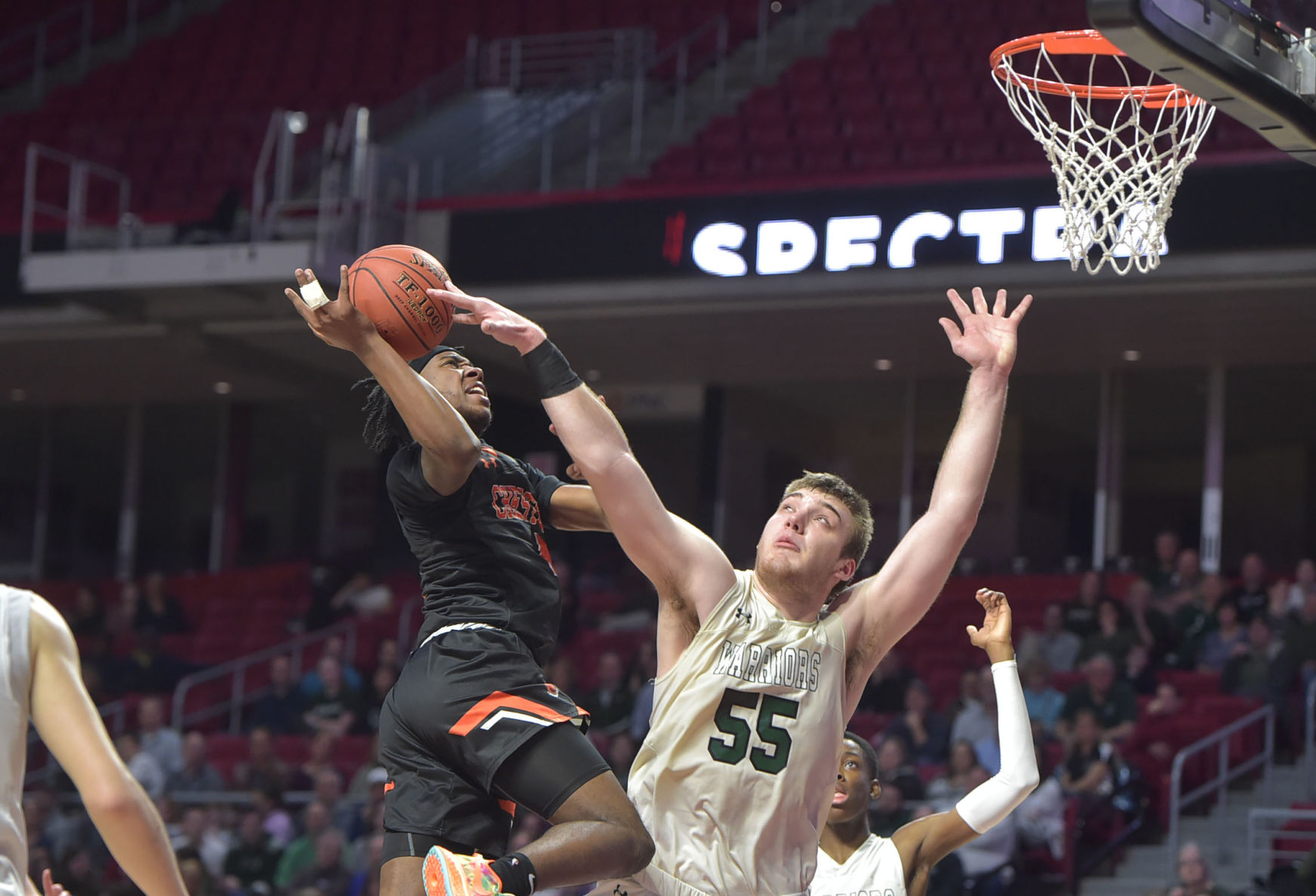 Chester's Akeem Taylor, left, is shut down by Methacton's Jeff Woodward in the second half of the District 1 Class 6A semifinal at the Liacouras Center Tuesday. Methacton handled the Clippers, 81-54. (Pete Bannan/MediaNews Group)

PHILADELPHIA — Erik Timko admitted that there were some nerves when he took the court at the Liacouras Center Tuesday night. But somewhere between the tipoff of the District 1 Class 6A semifinal and when he and teammate Brett Eberly chest-bumped after Timko splashed home a 3-pointer at the third-quarter buzzer, he’d loosened up pretty well.

Tuesday was just another game, Methacton would’ve said in the pregame huddle. But no less an authority than dominant senior center Jeff Woodward would admit it wasn’t entirely truthful.

“We made sure we got here and got the experience of being down here so it’s not like we’re just playing a game here,” Woodward said. “Obviously we know our mindset is it’s just another game, but we all know it’s not just another game. It’s got a lot more meaning. It’s a beautiful arena, it’s really, really nice, and I think it’s a great experience.” The game they put together, the top-seeded Warriors pasting No. 4 Chester, 81-54, in the program’s first District 1 semifinal, was extraordinary. It was also the latest first in a long line of them for a golden generation of Methacton basketball. And it was emblematic of the PIAA system that, despite the many shortcomings of its expansion to six classes, has led to an uptick in once-in-program-history moments like what Methacton shared.

Methacton coach Jeff Derstine took the advice of Pennridge’s Dean Behrens to get to Temple early, allowing his players to soak in the atmosphere (during an exciting if interminably long first semifinal, won by Cheltenham 77-60 over Bensalem). The group has had plenty of games together. But a district semifinal at a college arena with the presence of the Temple Owls home – that’s the stuff that kids remember 20, 30 years down the line, even if that sentimentality isn’t all that useful before the game.

But one that stuck with the center Tuesday was the chance to play at Temple. The Colgate commit, who had 20 points and 20 rebounds in a sensational performance, will play in arenas like this. But his mind gravitated to teammate Owen Kropp, a senior guard who scored 12 points Tuesday in the last days of his basketball career, and what an experience playing at Temple is for guys like him.

Methacton is one of many teams to recently make inroads in districts, coinciding by the expansion of classes from four to six. The Warriors are going to the state tournament for consecutive years for the first time in history. Their first states win came in 2015, and they won two games last year before authoring a classic PIAA quarterfinal against Pennridge, won at the buzzer by Sean Yoder.

All the playoff games and unfamiliar high school gyms might blur together after a while. But playing at Temple – that’ll stand out.

Methacton isn’t the only one, and resurgent programs are even more prevalent in Class 5A, which contests its semifinals Wednesday at Norristown (both finals are at Temple Saturday). Penncrest has become a fixture, having made all four semifinals since the six-class, winning the crowns in 2017 and 2018. Last year, Sun Valley and West Chester East squared off for the title, two schools with little recent hoops history. East is the decisive favorite this year.

Bank is open at the buzzer for Brett Eberly.
Halftime: Methacton 31, Chester 25. pic.twitter.com/1uRnrJeuOT

The change in formats didn’t cause this proliferation of contenders. The root causes come down to larger trends and sheer generational luck. But the district’s system gives programs more of a chance to shine. It certainly hasn’t helped Methacton win three consecutive Pioneer Athletic Conference titles, the first program to do that since Pottstown in the early 1990s. And it’s not why East won its first boys Ches-Mont title, making its first final this millennium. But the chance to play at a venue like Liacouras Center and contend for a district banner might represent the best memories, if not the last games, of the season.

Tuesday night, it mattered little that this was Methacton’s first District 1 semifinal and Chester’s 48th.

“They deserve to be here,” Chester coach Keith Taylor said. “They beat everybody they put in front of them. That’s big ups to them. They worked on their craft, stuck to their game plan and it worked.”

The six-classification system has ushered in a truly inane amount of teams in the state tournament. But for the metastasis of “state qualifier” on coaching resumes and social media account bios, the district fields still hold some of the richest memories made along the journey, accentuated at settings like Temple.

The lion’s share of those will still go to the traditional powers. The schools like Coatesville, Abington, Chester and Lower Merion will preside over the fields for the long haul. But it won’t be once in a blue moon that someone breaks the blockade, gets the serendipity of both a gifted class and having another school endure a down year just to reach a district semifinal.

And as the doors to the state tournament are opened ever wider, achievements like a trip to Temple or the elusive quest to cut down the nets become more intrinsically valuable as an end unto themselves, rather than just a stepping stone to whatever states round still awaits.

Methacton could feel it Tuesday night. And it raised its level to meet it.

It won’t be a game they soon forget.