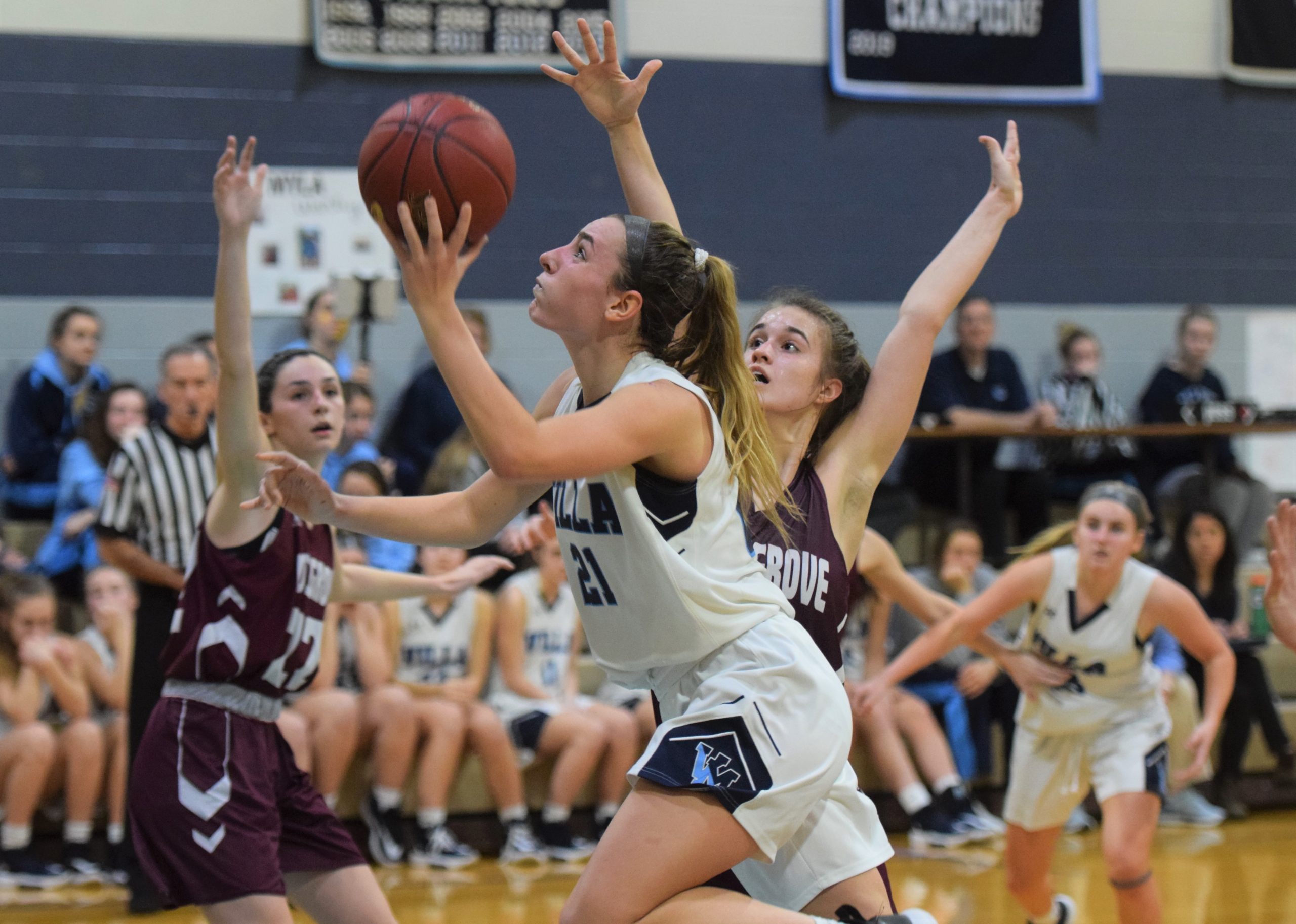 Villa Maria's Maddy Ryan looks to the rim as she gets by the defense of Pottsgrove's Sydney Mowery. (Austin Hertzog - MediaNews Group)

It ended like a team that know its way around this time of the postseason, especially when a PIAA tournament place is on the line.

In between, Villa Maria got all it could handle from Pottsgrove. But the Hurricanes, which led 10-0 early only to see their lead trimmed to one in the third quarter, regained control of the game in the fourth quarter on the back of Maddy Ryan’s 23-point night and No. 4 seed Villa Maria downed No. 8 Pottsgrove 43-35 in a District 1-5A playback game Tuesday.

The District 1-5A champions of a year ago clinched a place in states for the third straight season while improving to 17-8. The Hurricanes, which also got 10 points from Morgan Warley and four apiece from Myla Warley and Jackie Ford, will host No. 6 West Chester East – a playback winner over No. 2 Penn Wood Tuesday – in the District 1 fifth-place game on Friday.

Final: Villa Maria 43, Pottsgrove 35, District 1-5A girls basketball playback. Fast paced Hurricanes get back in gear in 4th, clinch return to PIAA playoffs. End of season for the Falcons pic.twitter.com/vRhuceIaJS Villa wasn’t short on desire after falling to AACA rival Mount St. Joseph 37-31 in the quarterfinals, its senior-led lineup missing out on a third straight trip to the district final.

“I think that gave us motivation because we were all pretty mad that we lost,” Ryan said. “We do a good job sticking together. We played pretty hard last game so it was more situational things that we needed to fix. We were pretty fired up, which I think helped us this game.”

Pottsgrove saw its season conclude at 18-8. The Falcons fell to No. 1 seed Springfield-Delco 36-31 to drop into playbacks after winning its first district playoff game in more than a decade, defeating Upper Moreland in the first round. The Falcons, which went unbeaten in the Pioneer Athletic Conference Frontier Division and reached the PAC tournament semifinals, will bring back the bulk of its junior-centric rotation with the exception of senior Summer Walker (8 points). Junior Sydney Mowery scored a team-high 11 with eight rebounds while six points apiece were turned in by Sierra Potts and Rachel Ludwig, who was playing with a facemask after suffering a fractured nose against Springfield. Riley Simon had six steals.

The outcome and how it came to be – falling behind big, battling to close the gap only to falter late – felt like a recurring theme to Pottsgrove coach Mike Brendlinger.

“It was the same as what’s been happening to us lately: we get behind, have a bad stretch, we fight back but then we have to foul at the end and wind up a little bit short,” Brendlinger said. “But the girls fought all the way. We had it down to (one) but we could never seem to get over that hump.”

A matchup of contrasting styles and tempos, Villa imposed its up-tempo preference early, leading 10-0 before Pottsgrove’s first basket at 2:02 in the first quarter.

It looked like it could have been a runaway in the making. But Pottsgrove has proven throughout the season it’s not short of fight. Villa led 22-14 at halftime but Pottsgrove had its best stretch in the third quarter, forcing a string of turnovers from VM and went on an 8-1 run that cut the Villa lead to 25-24 on a Walker jumper at the 1:54 mark.

But the Hurricanes came crashing in, using a 7-0 run that included baskets in transition by Ryan and Warley to rebuild a 32-24 lead with six minutes to play. ’t like when teams slow it down, especially because we’re big on transition,” Ryan said on Villa’s up-tempo identity. “We work on that a lot in practice. That’s a big part of our team.”

“I’ve got some kids that can run, even our big kids run the floor well. We don’t want to put the brakes,” Villa coach Kathy McCartney said. “It’s what we do, play 90 feet and push the ball. We thought that was a decided advantage for us tonight and it turned out to be.”

Pottsgrove would get no closer than four again as Ryan’s strong offensive rebound on a free-throw miss and subsequent 2-for-2 trip to the line punctuated the Hurricanes’ winning result.

A full house in Villa Maria’s compact gym made for a true playoff atmosphere, the type of atmosphere Brendlinger hopes Pottsgrove will take with it for the future.

“The gym was loud, a nice crowd for both sides, and the intensity was high,” he said. “It’s really fun to be in these situations and I’m glad the girls had the opportunity to be here. We have just about everybody coming back so I think the experience is going to be invaluable. That was one of the things we talked about: a lot of these teams, like Villa, they are in it every year and they’re accustomed to that pressure and that sort of game (like Tuesday). Now we’re getting more accustomed to that and hopefully it will carry over into next year and help us in the playoff run.” Great Valley’s defense shuts down Radnor in District 1 5A semifinal
Chester goes flat, then splat in bowing to Woodward, Methacton