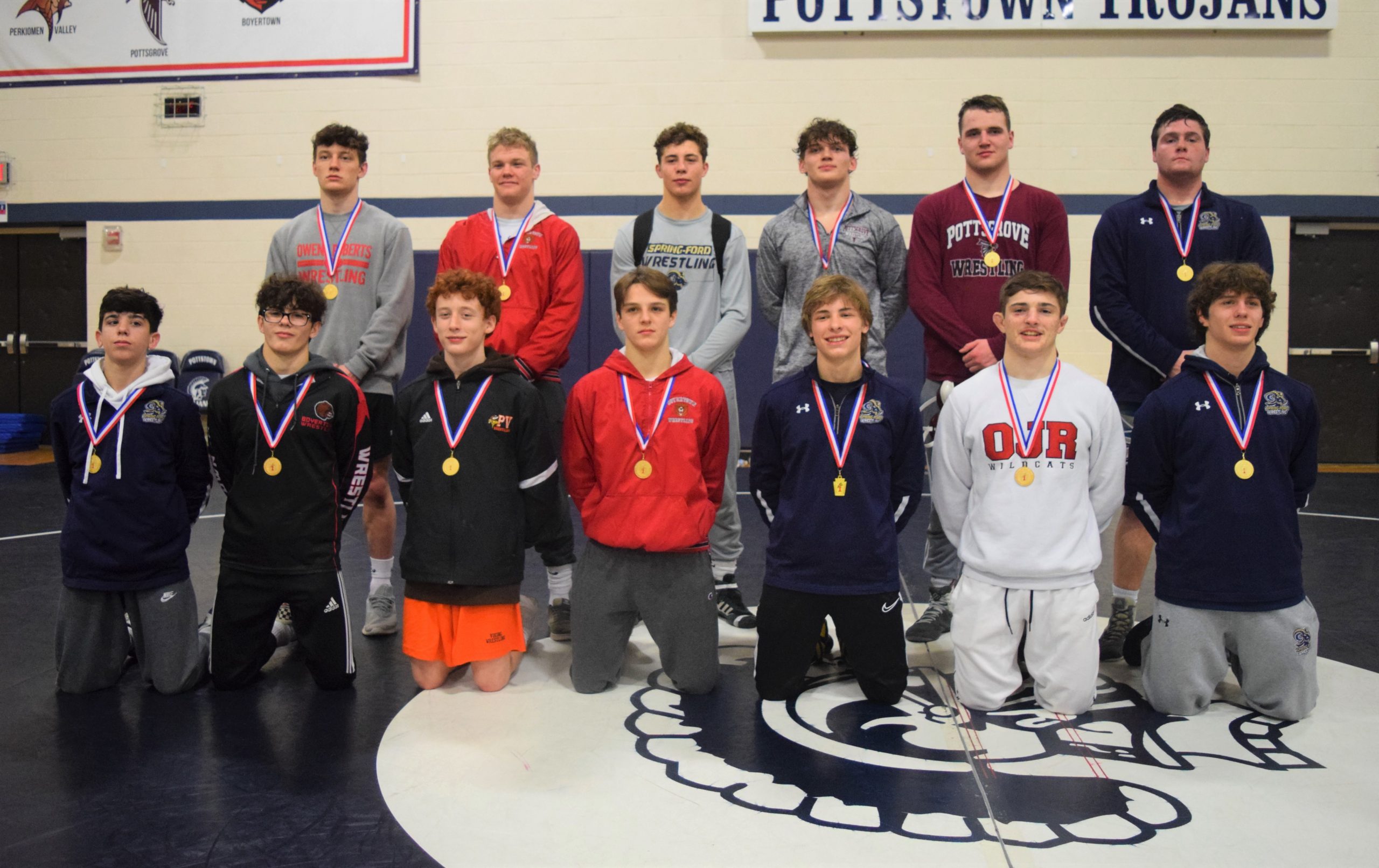 POTTSTOWN >> Antonio Petrucelli had a 2019 wrestling season that would have been the envy of most of his contemporaries.

The Owen J. Roberts then-junior won more than 40 bouts and medalled at each level of the post-season, the highlights a runner-up showing at the South East AAA Regional and a fifth-place medal at the PIAA Tournament.

The principal downside? Souderton’s Tyler Williams, who consigned Petrucelli to a third-place medal in the District 1-AAA North tournament after a narrow 3-2 loss in the 138-pound semifinals. Williams also won their South East AAA Regional final, 9-3.

Very little has gotten in Petrucelli’s way this winter. The University of Pittsburgh-bound senior has stormed to a 33-4 record, and to a championship in the District 1-AAA North tournament this weekend at Pottstown.

“I was talking with the coaches about not having won a district title yet,” Petrucelli said. “It’s kind of nice to get the first, but I’m not stopping there.”

Petrucelli started the weekend on a point-scoring spree, posting technical falls on Upper Perkiomen’s Gavin Marks and Conestoga’s Hayden McLellan. He made a faster finish to his afternoon, using just 31 seconds to dispatch Boyertown’s Noah Fisher.

He did all that working around a left shoulder that required icing down afterward. He’s not about to let it get in the way of big weekends at regionals and states, though.

“Ice and rest,” was the prescription Petrucelli will follow. “I talked with the coaches, and the goal was to get off the mat as quick as possible. I’m not thinking about it.”

While Petrucelli was enjoying his championship weekend, Spring-Ford was happy on several fronts.

The Rams will advance 11 wrestlers to the regional. They had five champions out of seven finalists and another three third-place finishers, securing the team championship with 239 team points … well ahead of second-place Boyertown (177.5), third-place Owen J. Roberts (173.5), Perkiomen Valley (158) and Conestoga (142).

“The kids wrestled well, they wrestled hard and wrestled with a lot of energy all weekend,” head coach Tim Seislove said. “They knew if they kept winning matches, everything would fall in place.”

Adding to the Rams’ treasure trove was Joey Milano. The champion at 182, being named Outstanding Wrestler off a two-pin, one tech-fall run; and Seislove being named the PAC’s Liberty Division Coach of the Year.

“It was a team effort,” Seislove said. “They all have a common goal. That’s what we’re trying to achieve.”

Milano, who ran his season record to a gaudy 40-0, emphasized the team’s work ethic.

“We always want to get better,” Milano said. “We keep working hard. The coaches, in the post-season, want us to be there mentally.”

“I changed up my setups and shots,” Maldonado said of the upward weight move. “I still have to work on my bottom starts.”

Maldonado is shooting for an upgrade to last year’s eighth-place state medal. He’s also closing in on the 100-win mark for his scholastic career, currently standing 10 victories from triple-digit fame.

The weekend proved doubly significant for Kibwe McNair. Along with claiming the 138-pound gold medal in a 6-4 decision of Spring-Ford’s Zach Needles, the Methacton senior confirmed he will be joining Kutztown University’s mat program after graduation.

McNair (24-1) found himself in a tight bout with Spring-Ford’s Needles. He came out on top 6-4, but not before he and Needles were in an even tussle for much of the third period.

He and senior teammates Roman Moser (second at 160) and Osvaldo Carbajal (third at 126) are working to close out their scholastic mat careers on an upswing, off a season of transition under new head coach Tony Haley.

“Coach brought in people who could help us with their knowledge,” McNair said. “It’s something more solid, more official.”

Connor Quinn of @OJRwrestling guts out a 1-0 win over Roman Moser for title at 160. Closest final so far pic.twitter.com/VZRz0lo40S

Moser and OJR’s Connor Quinn found themselves in a gold-medal rematch at 160. A second-period escape from a bottom start proved to be Quinn’s margin of victory, 1-0.

“Last year I beat him 10-4,” Quinn recalled. “I wanted to keep scoring and not give up takedowns. But he got a lot of restarts on me, caught me stepping too far and got a lot closer.”

Avery Shivak of Pottsgrove with a strong 9-7 win in 195 final over Louie carbajal. Exciting match pic.twitter.com/SyzNEEtLDI

“Me and Avery go hard in the room,” Van Horn said. “I told him to be himself, and he was going to get there.”

NOTES >> The top four placers in each weight class qualify for next weekend’s regional at Souderton. Perkiomen Valley will advance eight, Boyertown seven and OJR and Pottsgrove six apiece. … Prior to the medal round, Pottstown High honored assistant coach John Armato by naming its wrestling room for him. Armato, who’s served the school’s mat program for 50 years, was further honored with a congratulatory videocast from wrestling legend Dan Gable and the presence of current and former Pottstown head coaches. … In other pre-final ceremonies, the PAC’s Frontier Division Coach of the Year award was presented to Upper Perk’s Steve Adam, who led the Indians to the division regular-season championship this winter.

John Armato, holding placard left, stands with all the former wrestlers and coaches whose lives he has impacted after having the Pottstown wrestling room dedicated in his honor ahead of the finals at the District 1-3A North tournament Saturday Pottstown. (Austin Hertzog – MediaNews Group)

Spring-Ford poses for a photo after winning the team championship at the District 1-3A North tournament at Pottstown. (Austin Hertzog – MediaNews Group)

Pottsgrove’s Avery Shivak drives through on a takedown of Spring-Ford’s Louie Carbajal during the 195-pound final. (Austin Hertzog – MediaNews Group)