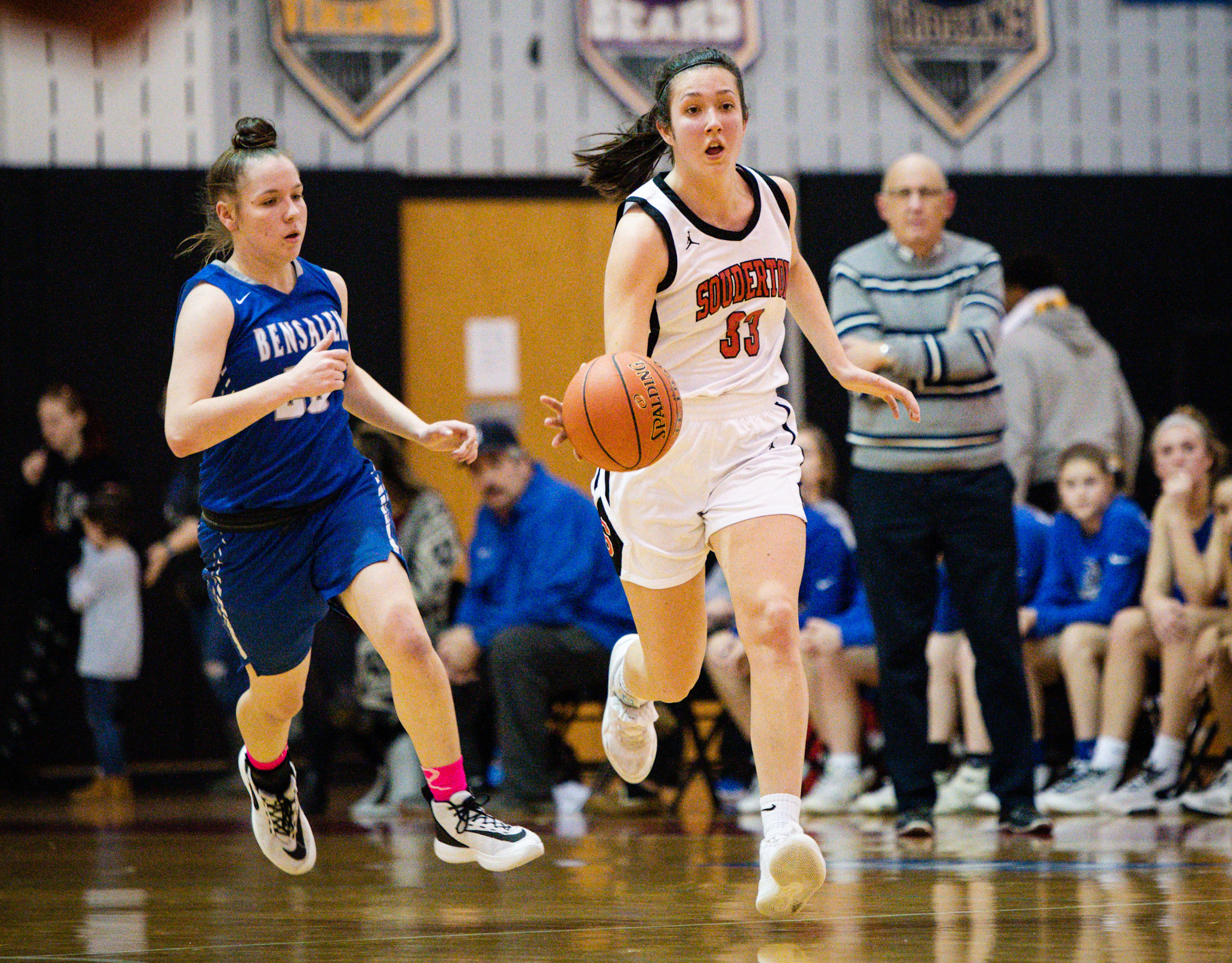 FRANCONIA >> Souderton certainly had a much better start in mind for its playoff opener.

A driving basket by freshman Casey Harter with 2.3 seconds left was the Indians’ first and only field goal of the first quarter but luckily their defense hadn’t waited quite as long to get started. Once the slow start was out of the way, senior Mikaela Reese helped get things going and Souderton was back in business.

The No. 12 Indians finished much better than they started, topping No. 21 Bensalem 44-24 in Friday’s District I 6A girls’ basketball first round game.

“We had to get our emotion going, you have to take risks sometimes for it to pay off,” Reese said. “We were driving in, wanting to shoot against them and trying to find our flow.”

Bensalem scored first, but the Owls needed nearly five minutes to do that as both squads spent a lot of time trying to feel out the opposing defense. Haley Keenan gave her team a 4-1 lead with 18 seconds to go in the opening quarter before Harter’s driving score, a bucket that seemed to do wonders for Souderton after the quarter break.

If Souderton’s defense was the constant, then Bensalem’s was the wildcard. Indians coach Lynn Carroll said the zone defense the Owls came out in wasn’t something she had seen scouting Bensalem and it threw Souderton’s offense off in the first quarter.

Reese however, made sure it didn’t last. The senior center scored the first four points of the second frame, hit a three for a 15-9 lead and ended the quarter with a putback for a nine-point quarter as Souderton took a 20-13 lead into intermission.

“That’s what she does,” Carroll said. “When we need points, she steps up and scores. When we need somebody to force a steal, she somehow finds a way to do that and all season now, 23 games, she figures out what the teams needs and is willing to step up and do it.”

Reese said seeing that first score go in seemed to perk up the team’s energy and when they came back on the floor, everyone was talking more, the ball moved a little quicker and her teammates had more confidence. Outside of the senior and junior Olivia Schneider, Friday was the playoff debut for most of Souderton’s roster.

The lone returning starter from last year’s state playoff team, Reese knew her teammates would have some jitters to work through and she didn’t expect a perfect start. She was also happy to be the calming influence they needed to get themselves going.

“Last year was my first playoff game, it’s a different atmosphere at first but I wanted them to know it’s just like a normal game so just go out and play,” Reese said. “I was just trying to calm them, there’s a lot more people than usual and I told them shots will fall so just keep your momentum going.”

Reese led the Indians with 15 points, added eight rebounds and ignited the defense with five steals and two blocks. Harter took the wheel in the third quarter, scoring the team’s last seven in the frame as Souderton started to open the game up and took a 31-19 advantage to the fourth.

Despite the game being in Souderton’s gym, the Owls had plenty of vocal support behind them. Between a fan bus and the boys basketball team – on a first round bye – Bensalem had a solid contingent behind the bench trying to take away the home floor advantage.

Reese said her team is used to practicing with a lot of noise in the gym which the senior thinks helps the Indians when the other team’s fans get loud.

“When you’re playing, you kind of zone out and try not to pay attention to your surroundings,” Reese said. “I think everyone did a really good job with that, because it can get nerve-wracking if you let it.”

Keenan led the Owls, who had their best season in a few years, with 14 points.

“Everyone got that chance to step their toe in the water and see ‘this is what it’s like to play in a playoff game,’” Reese said. “They handled it really well and that helped us. Everyone was really excited to play this game, the playoffs are so much fun. I love them, they’re just the best.”

Souderton will hit the road for Wednesday’s second round for a date with No. 5 Methacton. The Warriors are a tough defensive team and have been really good at home, so Carroll was glad her team got the chance Friday to get nerves out of the way.

“We were very pleased we earned a home playoff game but we don’t want that to be good enough,” Carroll said. “We want to put our best foot forward each time and don’t have long to celebrate.”