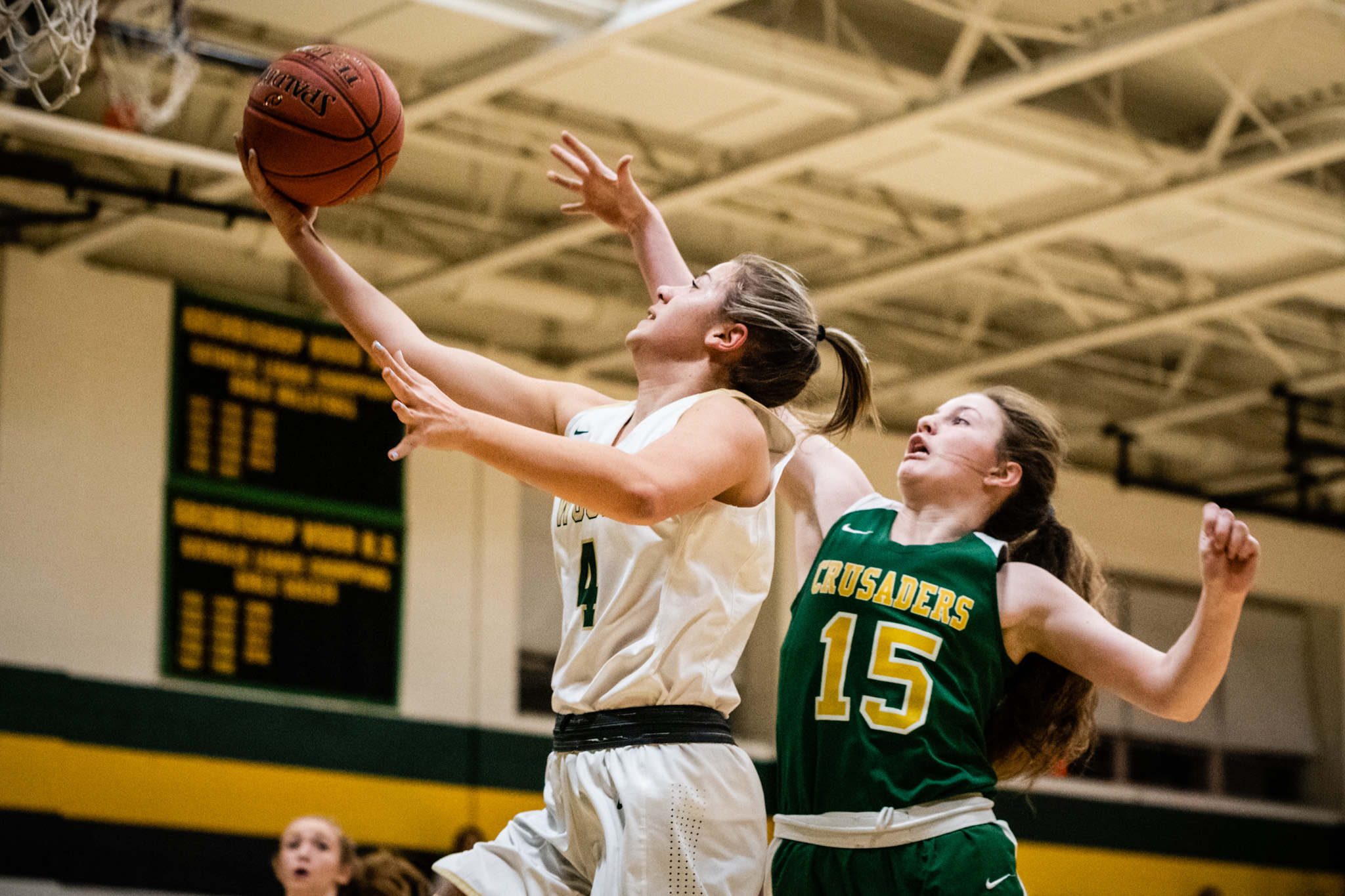 Sitting on a week’s worth of pent-up energy, the top-seeded Vikings came out on fire and didn’t let No. 8 seed Lansdale Catholic have a chance to really get going. The postseason party had started for the Vikings and they didn’t want to leave anything to chance as they try to reach the Palestra.

Wood stormed early in the battle of PCL division winners, downing the Crusaders 81-42 in the PCL quarterfinals.

“We wanted to start off right in the playoffs,” Wood junior co-captain Noelle Baxter said. “Lansdale’s been playing well, they were beating all the teams in the other division so we wanted to come out hard and play really tough.”

Wood (17-6) hit a three on the game’s opening possession, with LC’s Mia Rosenberger answering with a trey before the Vikings ripped off the next eight points. Transition was the name of the game early for Wood, which looked to get the ball up the floor as fast as possible off every rebound or LC turnover.

A steal by Baxter led to a Kaitlyn Orihel layup in between a pair of threes as Wood went up 16-4 midway through the opening frame. Not only were the Crusaders (21-3) playing catch-up on the scoreboard, they were often trying to get back on defense and catch up with the Vikings’ outlet passes.

“We weren’t really communicating on the defensive end, which we should have been doing and when you don’t start games in the right mindset, it’s really hard to get into that mindset,” Crusaders senior co-captain Riley DeVitis said. “It was tough. If we had a turnover, it was no one’s fault, but since we were so far down the court, we struggled getting back.”

“We focused on really pushing the ball, getting fastbreaks and getting offensive rebounds to let us run through our stuff,” Baxter, who dished three assists, said. “That was us just rolling, really. Our court vision is pretty strong this year, so when we saw people running up the court, we threw it.”

The Crusaders have stressed Energy, Effort and Execution as their motto this season but LC coach Eric Gidney felt his team’s energy was a little lacking to start Thursday’s contest, which led to lapses in execution.

Wood led 29-13 at the end of one and built a 47-23 halftime advantage. After Orihel and Ryanne Allen split the first 16 Wood points evenly, their teammates got in on the act and by intermission, eight Vikings had scored at least a point.

Lansdale Catholic has put together a strong season to this point, but the Crusaders don’t have the same type of depth the Vikings have just yet. Gidney noted Wood’s ability to sub in three or four fresh players every four minutes wore the Crusaders down by the second half.

“They’re a class program, those banners are up there for a reason and it’s something we aspire to get to,” Gidney said. “I think we can. We’ll take the loss, it’s humbling, we’ll lick our wounds and we’ll learn from it. If you’re going to lose one like this, let’s try to learn from it.”

DeVitis, who scored eight, had a similar outlook saying the team will break down the film and regroup. LC’s regular season included a win over Bonner & Prendergast, meaning the Crusaders will get to play for the District 12-4A title later in the month and then advance to states.

“We can take away from this game going to districts and states,” DeVitis said. “Hopefully we have a lot of season left and this is just a little bump in our journey to states.”

“We talked about it postgame, even after some of big wins this year, you turn the page,” Gidney said. “You have to move on, we have to learn our lessons from it, so we have to do that, be tough on ourselves and fix it or that’s when it happens again. This would be the time of year to now get on another winning streak.”

Five Wood players reached double-figure scoring and the team racked up plenty of assists led by Izzy Larsen’s seven even as the starters began to find their way to the bench and the reserves took over. Shannon Morgan’s buzzer-beating layup ended the third quarter with Wood leading 70-30, part of an 11-point outing for the sophomore.

The Vikings move on to face a very familiar playoff adversary in No. 4 seed Cardinal O’Hara, a 50-47 overtime winner against defending champion Archbishop Carroll. It’ll be another week between games for Wood, with the semifinals taking place next Thursday at Jefferson University. Wood swept its two regular season games with the Lions, but needed a buzzer-beater from Orihel to win the second.

“It’s been a while since we’d played, I was a little curious what it would be like but we came out with a lot of energy and pushed the ball,” McDonald said. “We made shots early, it made us feel good and we did a good job but at this time of year, it only gets tougher.”

“The season is hard but the postseason, we know everyone is our for Wood,” Baxter said. “We want to play our best. This was our first game, we wanted to get rolling and take some good mojo into the rest of the postseason.”