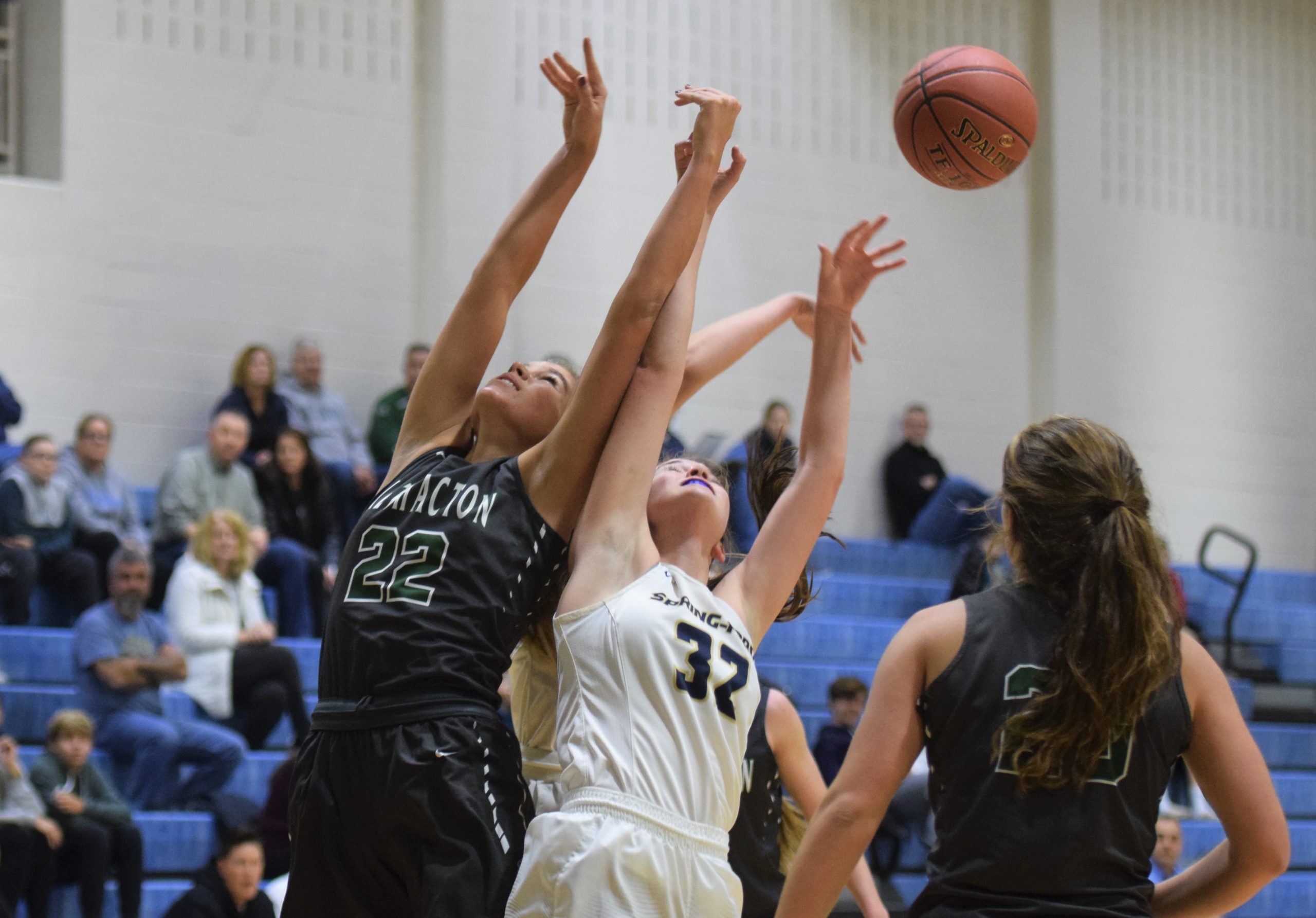 The Pioneer Athletic Conference’s top 2 programs of the last two seasons, Spring-Ford and Methacton, meet for the conference championship for the second season in a row Wednesday night, 7 p.m. at Spring-Ford.

Both have the same core as their PIAA-qualifying teams of a year ago, have already amassed 20 wins, are top 5 teams in District 1 Class 6A. And each has a win over the other in the regular season, setting up an exciting and competitive finale.

Here is a look at Wednesday’s championship:

Path to the semifinals >> After a first-round bye, Spring-Ford defeated No. 5 Owen J. Roberts 54-38 in the semifinals on Feb. 8. OJR was within 33-29 in the final minute of the third quarter, but it was all Spring-Ford down the stretch.  … In the first round, Methacton overcame a poor start to defeat Boyertown 45-35 thanks to a 35-15 rebounding disparity and 14 points from freshman guard Cassidy Kropp. In the semifinals, the Warriors broke out to an 18-point lead in the first half before having to fend off a furious rally attempt from Pottsgrove in a 55-47 win.

Championship history >> Wednesday’s final is a rematch of the 2018-19 final, won 55-41 by Spring-Ford. Spring-Ford is the two-time defending champion of the PAC and has won eight PAC championships in the playoff era (since 2005-06). The Rams are 8-1 in PAC final appearances … Methacton is making its 7th trip to the conference championship game, including the third time in the last four years. The Warriors have never won the PAC tournament, going 0-6 in past finals trips (including an 0-4 record vs. Spring-Ford).

Head-to-head >> On Dec. 12, Spring-Ford went wire to wire with an overwhelming 49-32 win over Methacton, junior guard Lucy Olsen scoring 20 points. On Jan. 16, Methacton dealt Spring-Ford its first league defeat in two seasons with a 42-39 overtime win. Sophomore Nicole TImko hit a 3 as part of her 13-point game for a 40-38 lead in overtime that gave the Warriors the lead for good. It ended a seven-game losing streak to Spring-Ford.

On Spring-Ford >> Spring-Ford returned three starters from last year’s District 1 semifinalist and PIAA qualifier and has experienced similar success while earning the No. 3 seed for the upcoming District 1-6A tournament. The Rams run through junior point guard Olsen, last year’s Mercury All-Area Player of the Year, who is averaging a PAC-best 19.3 points per game. Olsen continues to improve her offensive versatility and is equally a standout on the defensive end. She is complemented by senior forward Yuan (7.8 ppg), junior guard and 3-point threat Abbey Boyer (7.1 ppg) and other starters, wing Skylar Sullivan (5.5) and forward Hailey Hudak. Head coach Mickey McDaniel’s rotation also features Gabs Alessandroni, Mac Maloney, Juliana Scogna and De’ja Engle. The Rams’ second-leading scorer, junior Emily Tiffan (9.9 ppg), has been out since Jan. 1 due to a foot injury.

On Methacton >> Methacton, which returned four starters from last year’s PIAA qualifier, is on a 12-game winning streak. The Warriors are led by sophomore guard Nicole Timko, the PAC’s third-leading scorer at 15.6 points per game (PAC-best 70 3-pointers), and senior forward Sydney Tornetta (11.9 ppg), who surpassed 1,000 career points in January. Freshman point guard Cassidy Kropp (7.6 ppg) has shined on both ends of the floor while seniors Sydney Hargrove (5.7 ppg) and Caroline Pellicano (4.1 ppg) are reliable fixtures in the frontcourt. Tori Bockrath and Allie Hazlett are the first players off the bench for coach Craig Kaminski’s squad. The Warriors allow only 30.9 points per game, best in the league in the regular season.

Breakdown and Prediction >> Little separates the Rams and the Warriors this season in multiple ways. The two teams have similar styles with guard-heavy scoring led by Olsen and Timko, capable 3-point shooters and hard-working frontcourt players that won’t dominate offensively, but will provide winning contributions on the boards and defense. Both squads can get stops on the defensive end but focus will be given by Methacton to slowing Olsen’s inside-outside versatility, while Spring-Ford will be out to make life difficult on the perimeter shooting of Timko and lane penetration of Tornetta.

And unlike last year, the season series is split.

“I think beating them will at least give us more confidence than just thinking, ‘We can beat them, we just never do.’ Having beaten them now, hopefully that confidence kicks in,” Methacton coach Craig Kaminski said. “But Spring-Ford is the best team in the league, on their home court, one of the best teams in the district and state, one of the best players around (Olsen) … they just play on another level in the playoffs. They’re like a light switch and they raise their game so we’re going to have a lot to handle on Wednesday night. But I think this team is really up to the challenge … and I hope I’m correct.”

When it comes to girls basketball in the PAC, the psychological edge is almost always in favor of Spring-Ford. Past Methacton teams know that fact well. This winter’s Warriors with their senior trio of Tornetta, Hargrove and Pellicano and complementary standout underclassmen are equipped to push back on that.

Methacton is capable of finally getting the program to the top of the PAC, but Olsen and company have the pedigree on the floor and in the mind. And the ability to seal a game at the free-throw line  … Spring-Ford 45, Methacton 41.