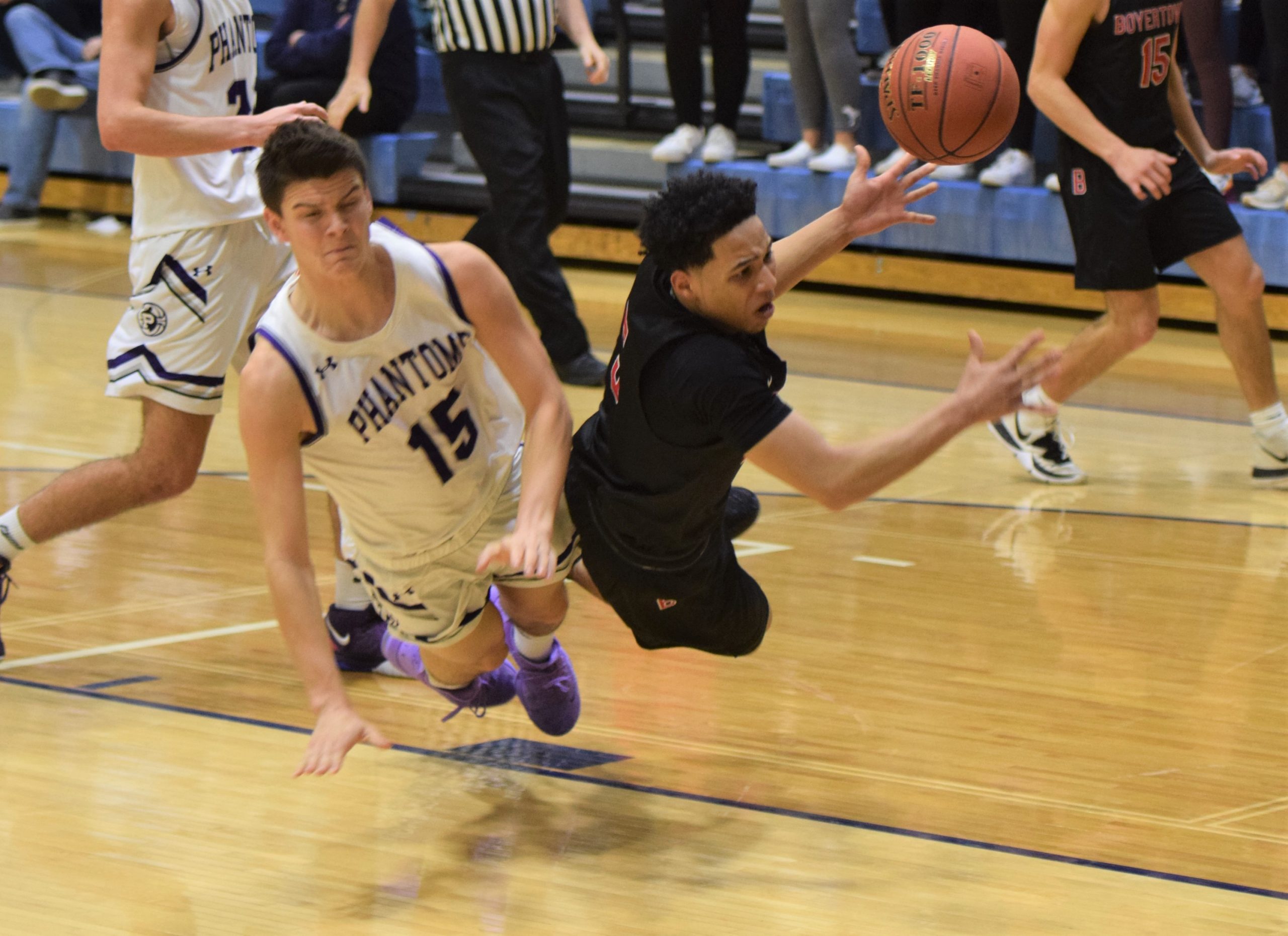 ROYERSFORD >> Clay Kopko scored the go-ahead basket and then took a crucial charge down the stretch Wednesday night as Phoenixville downed Boyertown 45-41 in the opening round of the Pioneer Athletic Conference Final Six playoffs at Spring-Ford High School.

The No. 4 seed Phantoms out-scored the No. 5 seed Bears 11-2 in the final quarter to advance to a Friday night semifinal at 7:45 p.m. against top-seeded Methacton.

Kopko scored 11 and grabbed a game-high nine rebounds and Steven Hamilton had 11 points and four assists for Phoenixville (14-9). Tre Diguglielmo scored 10 and Aarick Salata had seven points, seven rebounds and seven assists for the Bears (16-7).

Kopko put in a layup off a pass from Chris Weiah for a 43-41 lead with 1:04 to go and got the ball back for the Phantoms when he drew a charge as Salata tried to drive underneath along the left baseline.

“Coach stressed hustle plays in practice the last two days,” said 6-2 senior forward Kopko. “Someone had to step up and I took the charge. I saw him full-steam ahead. He wasn’t stopping, so I stepped in. I’ve been taking charges all year. We do charge drills all year in practice. ”

Aarick Salata drives to the hoop but Clay Kopko slides underneath to take the charge and erase the hoop. pic.twitter.com/5OzKB1RcLr

“I wasn’t surprised,” Phoenixville coach Eric Burnett said concerning the charge play. “As soon as I saw them drive. I’ve seen him do that so many times over his career. Clay Kopko is just the ultimate leader. Not just the stuff he does on the court, but he holds guys accountable in practice. He’s non-stop energy.” Phoenixville’s Clay Kopko made a basket and took a charge to help the Phantoms to a PAC playoff win over Boyertown on Wednesday at Spring-Ford. (Austin Hertzog – MediaNews Group)

The game still wasn’t over as the Phantoms turned the ball over with 22 seconds to go. But the Bears missed a 3-point attempt, Weiah pulled in the rebound and Hamilton iced the win by hitting both ends of a 1-and-1 situation with seven seconds to go.

Boyertown, which won 55-47 in the regular season encounter two weeks ago, got the ball inside repeatedly while running off 11 straight points in the middle of the second quarter for a 25-19 advantage and was up 29-25 at the half.

Chris Weiah to Clay Kopko inside puts Phoenixville up 43-41 with a minute left. pic.twitter.com/8HznKJBkrX

Phoenixville scored seven in a row, five by Kopko, to start the second half. Then the Bears countered with seven straight of their own on back-to-back treys from beyond the top of the circle by Diguglielmo and a free throw by Mason Marinello (7 points, 5 rebounds) for a 36-30 lead.

The Bears, who shot just 3-for-21 from the floor and 4-for-12 from the line in the second half, were up 41-36 early in the final quarter after Diguglielmo scored inside. But Mike Memmo drilled a 3-pointer from the left wing and Hamilton sank two at the line to tie the score, 41-41, with 3:09 remaining. Phoenixville’s Steven Hamilton (1) goes up for a layup over the defense of Boyertown’s Chris Kiefer in a PAC playoff game Wednesday at Spring-Ford. (Austin Hertzog – MediaNews Group)

“Some of the leaders in the locker room got on everybody,” Kopko said concerning his team’s halftime talk. “The first game was a physical battle. We knew it was going to be tight down the stretch. Communication was the most important thing, and help (on defense).”

“That was what we talked about at halftime,” said Burnett. “We’ve got to rebound better and play with more urgency and we lost their shooters at times.”

Griffin Hummel added eight points and Chris Kiefer had six points and seven rebounds for the Bears, who will await the seeding for the District 1 playoffs. Memmo and Weiah each scored eight for the Phantoms and Will Allain had seven points.

“They’re a great team. They’re so well-coached,” said Burnett. “We’ll have to play our best game of the year Friday night.”