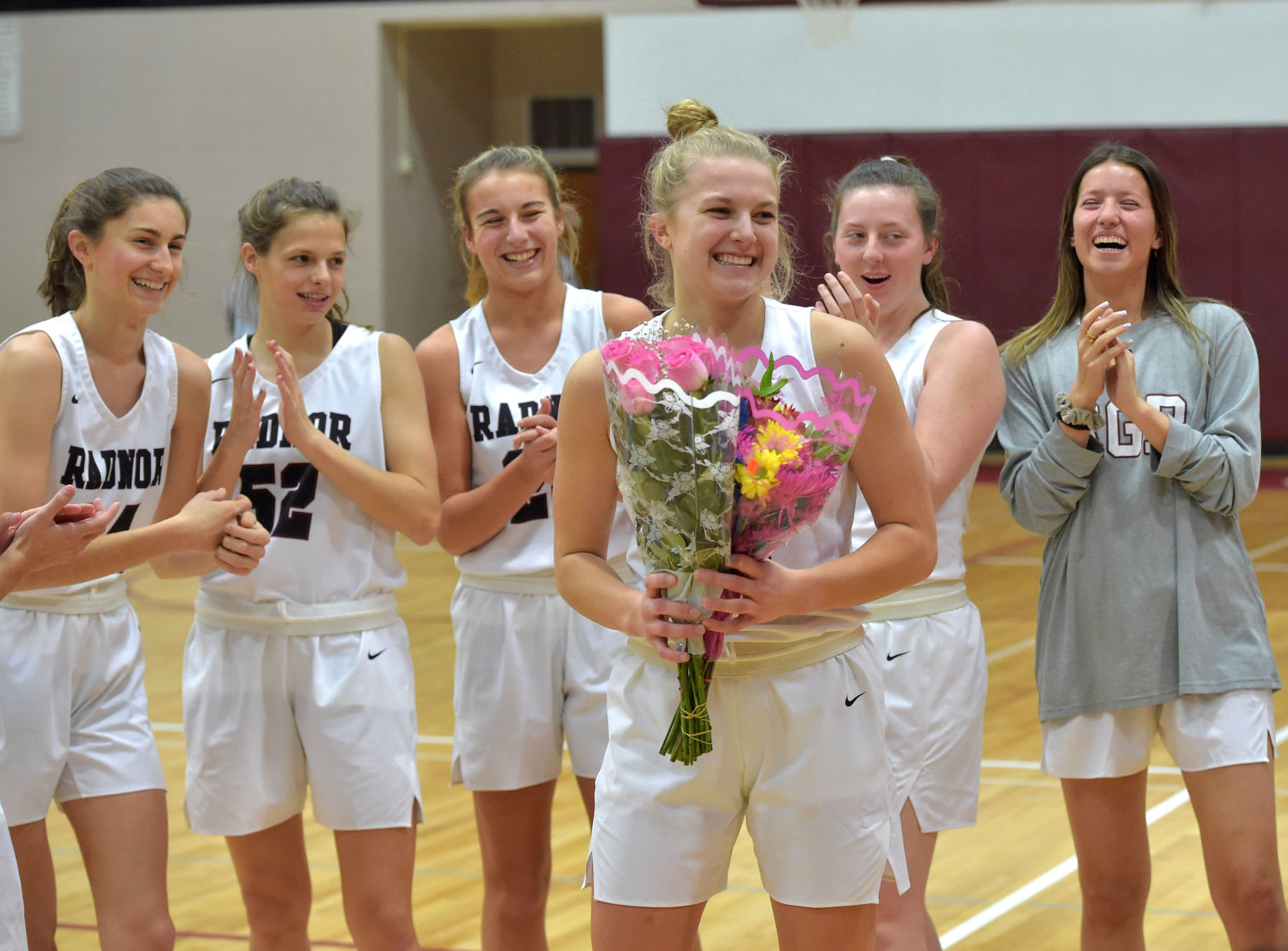 RADNOR — Raiders coach Mark Jordan tried to keep it a secret that Ellie Mueller was two points away from breaking the girls basketball scoring record.

Jordan did not succeed.

She looked around the gym and saw onlookers standing along the sidelines inside Radnor’s gymnasium, adjacent to the Raiders’ basket. People with smartphones and professional cameras just waiting for it to happen.

All Mueller needed was one measly basket.

“It took a while,” she said, laughing.

Sure, Mueller missed one or two cupcakes she’d otherwise connect on 99.9 percent of the time, but stuff happens. The fourth shot was the charm, though. She received the ball from Julia Rigolizzo in the low post, turned around and laid in an easy two. Play was halted and Mueller, who will play lacrosse at Princeton next spring, was greeted by teammates, family members and friends.

She scored her 1,226th point, surpassing the great Kelyn Freedman, whose record of 1,225 points stood for 10 years.

“I obviously owe it all to Jordan and all the players and coaches who have helped me along the way,” Mueller said. “Players like Nicole Massimino, Audrey Rosenblum, who assisted on, like, half of my points. She definitely helped, for sure. So many people, I have them to thank.”

Jordan coached Freedman during her record-setting career. The players are different. Mueller is a scrappy and at times dominant low-post player. Freedman had a bit more of a mid-range shot. Mueller and Freedman do have one thing in common – they are best known for their lacrosse talents and earned Division I scholarships.

If Jordan had a list of favorite athletes he has coached – and, boy, he has been around a long time – Mueller would rank right near the top.

“She’s our all-time leading scorer now and she’s just a great, sweet kid,” Jordan said. “Princeton is getting a great kid, a great person. Her game is a little bit different than Kelyn’s, but both great athletes. … I think she knew what was going on. She might have been a little nervous, she saw the balloons and the flowers. But we wanted to get it out of the way, get the emotion at the start of the game.”

But after the pomp and circumstance subsided, Mueller shifted her full attention on gaining a win against a Royals team that didn’t go away without a fight … or three or four. Time and again, it seemed, the Raiders were well in hand of winning this game, only to see the feisty Royals storm back and make things interesting. By the time it was over, both Mueller and junior combo guard Brienne Williams had fouled out.

“I wasn’t thinking about (breaking the record) too much. Most of all I was thinking about winning the game, which was obviously very close in the end,” said Mueller, who finished with 17 points, 10 rebounds, four assists and three steals. “It was nerve-wracking, for sure. The focus turned immediately to winning the game.”

The Royals kept within striking distance of Mueller and the Raiders in the first half and trailed by seven points at intermission. Radnor tallied eight straight points to begin the third quarter and led by as many as 19 points.

Led by Forrester, who poured in 34 points and was a spectacular 20-for-22 at the charity stripe, the Royals used a 17-1 run to trim their deficit to three points. Williams made back-to-back field goals, including a 3-pointer, to pull the Raiders out of their malaise. Radnor extended its lead to nine points, but the Royals kept coming at them. With a minute to go, sophomore Aubrey Ennis made a layup, Forrester swished two free throws, then scored a layup to pull UD within three points again with 13.2 seconds left. Forrester hit a triple as time expired,

“We have to play better defense and better basketball,” Jordan said. “We always try to peak in February, but we got to get better, especially defensively. I think we’ll be OK. Ellie is going to score … and we have Brienne who is doing a real nice job. She had a great floor game for us tonight.”

Williams paced the Raiders with 21 points.

Springfield 43, Conestoga 31 >> Rachel Conran and Alexa Abbonizio were the top point scorers for the Cougars with 12 apiece. Abbonizio did all of her damage in the first half.

Springfield (8-4, 8-0) remained in first place in the Central League.

Ridley 50, Strath Haven 33 >> The visiting Green Raiders (12-2) raced out to a 19-4 advantage after the first quarter. A balanced scoring effort did the trick for Ridley.

Faith Raymond led the way for the Panthers with 10 points and Sara Myers-Maloney added nine.