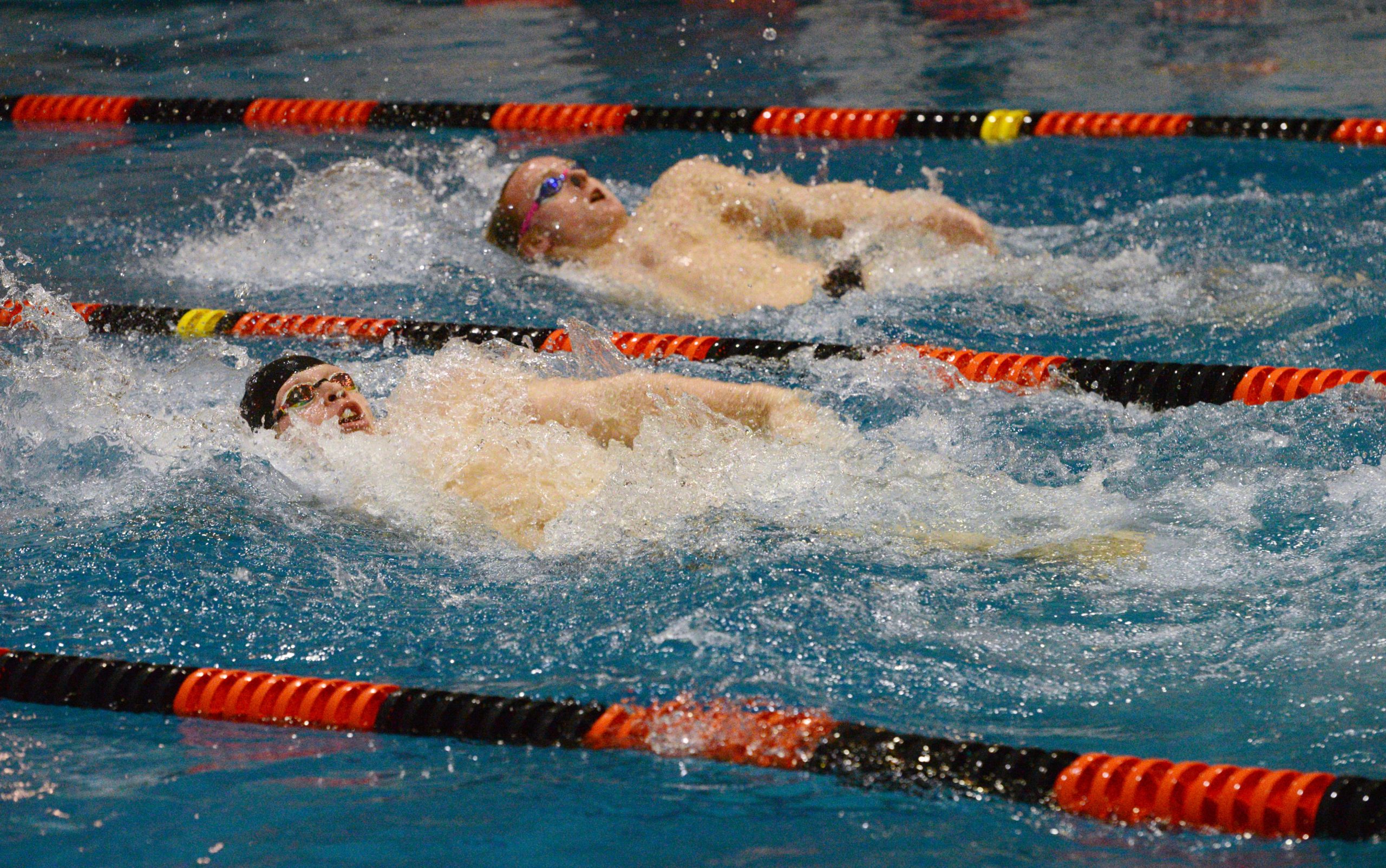 GRATERFORD >> This isn’t necessarily the time of the high school swimming season when times are of the utmost importance.

However, when a top-level swimmer finds him or herself in the pool next to another tough competitor, it can bring some added energy to a meet.

Owen J. Roberts’ Dalton Fink (100 back) and Perkiomen Valley’s Jacob Replogle (500 free) were both state qualifiers last season. They shared the pool Thursday, and while Fink (52.54) came away with a win in the 100 backstroke, Replogle (53.96) held the early lead and finished with a near-record time in the lane next to him.

“Not only is he a great swimmer, but he’s a great guy,” Fink said of Replogle. “It’s one of those things where you get to race a dude where you know he’s going to give you a solid performance out of yourself. It just gives you a lot of motivation.”

The competitive atmosphere was appreciated on both sides.

“Even though all the kids were swimming tired, it was a high energy meet because they’re a great team to compete against,” Perk Valley coach Mitchell Zackowski said. “It was fun.”

“Nate VanNatter, Jonah Kasznay, Joe Feiser, we have a ton of guys who have been stepping up and taking big roles,” Fink said.

“We were very happy overall with the effort at this time of year and the energy,” OJR coach Kevin Bott added on both squads. “We had some best times, and we had some kids today get a chance to do some events and perform, and I think some of the kids surprised themselves in some of the events because they hadn’t really had a chance to swim some of them before.”

Perkiomen Valley’s winners on the girls side (1-3) included Erin Lamirande in the 500 free, and Gabrielle Filzen in diving.

For the PV boys (4-2), Dylan Alexander won the 500 free, putting together a district qualifying time. Replogle won the 200 IM in a close race with Kasznay, and Evan Brzoska took first in boys diving.

“That was a really good race,” Alexander said of the 500 free. “That was one of my best times unsuited, untapered. I also was kind of proud of my 200 because that was also the fastest I’ve ever gone unrested, especially at this time of the year. That’s really good for me.”

Though he didn’t race in the event Thursday, Replogle went to states in the 500 free last season. He and Alexander also compete together in the 200 free, which brings out some spirited competition in practice.

“It’s real nice to practice with him, and it’s really motivating,” Replogle said. “We both keep pushing each other.”

Perkiomen Valley continues with PAC meets at Spring-Ford on Tuesday and back at home against Upper Merion on Thursday next week. Owen J. Roberts hosts Norristown on Tuesday before traveling to Methacton on Thursday.

NOTES >> Zackowski gave a special shout out to Siobhan Mayr, who swam the first individual race of her career in the 100 backstroke Thursday after joining the team just last season.