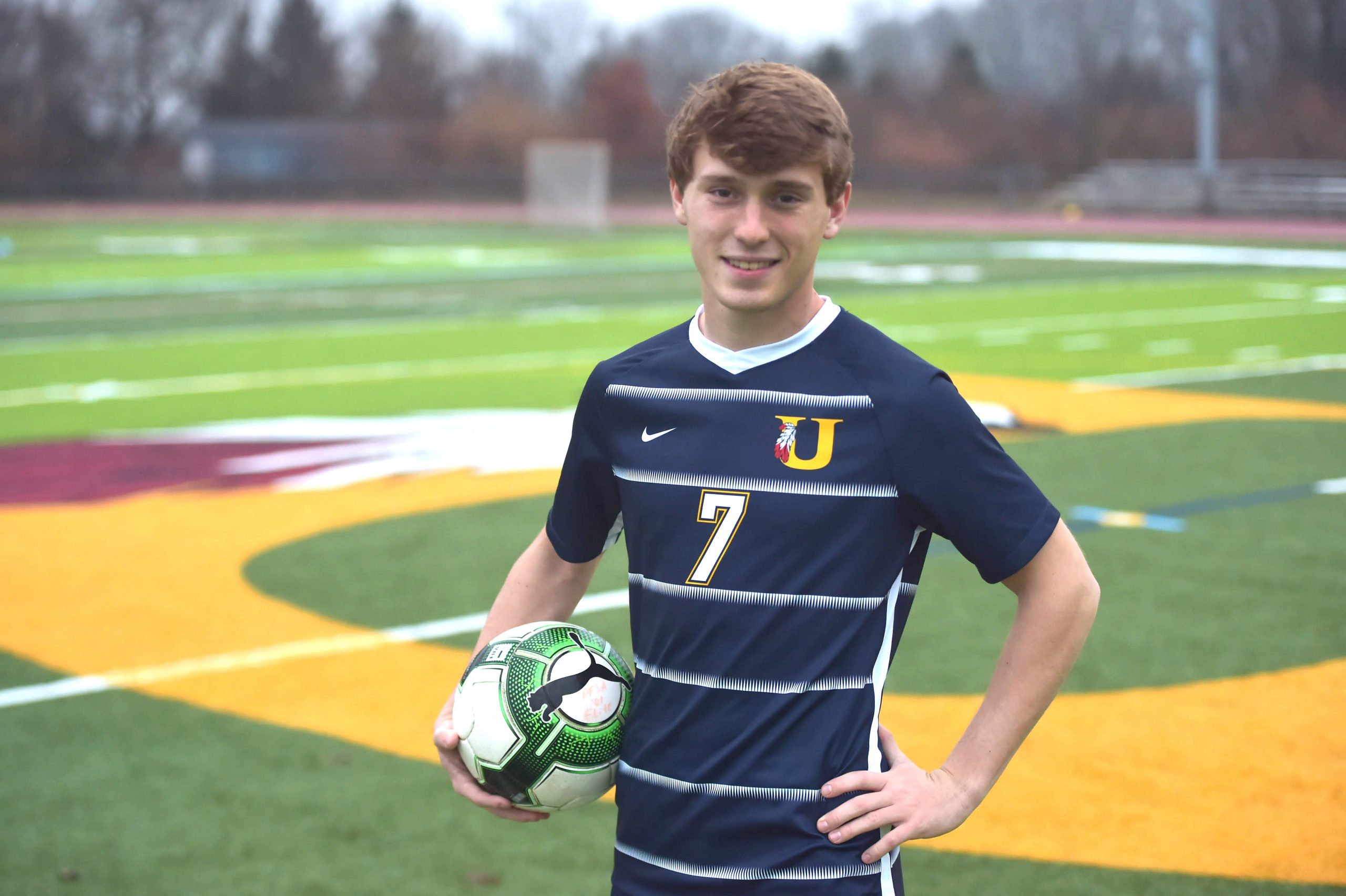 EAST MARLBOROUGH >> For a quiet guy, Michael Hewes’ reputation on the soccer field was just the opposite: loud and clear.

The Unionville senior was well known to everybody in the Ches-Mont League, in District 1 and beyond. Plaudits from opposing coaches were just about an everyday occurrence this fall as he led the Indians to the outright league title, just it was a year ago when Unionville advanced to the state semifinals.

“He was a very dangerous and dynamic player that you must always account for or he will find a way to punish your team,” added Great Valley’s Dave Moffett.

A four-year high school starter, there was very little the opposition didn’t know about Hewes. As a result, the midfielder faced, perhaps, as much defensive attention as any player in the area, and was the slam-dunk pick as the 2019 Daily Local News Player of the Year.

“Most teams we played knew I was left-footed,” Hewes said, as an example. “Early in games, I’d hear: ‘force him right.’ So this season I had to improve on going to my right.”

Despite literally being a ‘marked man,’ Hewes rolled up 21 goals this fall and added a career-high 10 assists for good measure. He was voted the Ches-Mont American MVP for the second straight year, and that’s just the beginning.

“Michael was constantly marked from day one. Everybody we played was aware of him and sometimes he was frustrated — but he still found a way to be dangerous,” said his coach Rich Garber, who just wrapped up his 20th season at the helm.

“He has an uncanny ability to shoot it on frame. He was able to finish plays when he had the opportunity. If not the best he’s one of the top two I’ve coached in that area.”

Not a boisterous type, Hewes still found a way to become an effective leader. And when he did voice an opinion, everyone listened.

“He’s quiet, but his teammates just naturally hang around him. He jokes around in his own little quiet way,” Garber explained.

“I’m more reserved, and when it comes to soccer I try to lead by example and if that’s not working I will step up and communicate.”

This fall Hewes repeated as a first-team All-League as well as All-State pick. He was later named All-Region and finally All-American by the United Soccer Coaches Association. He is Unionville’s first boys’ soccer All-American.

“He’s not blessed with great speed, but he does have unique quickness,” Garber pointed out. “His speed of play is very good because he makes quick decisions.

“He has the ability to keep the ball close to him and make really good passes. He is so efficient with his first touch of the ball, which makes him a very dangerous player.”

Hewes scored 59 goals in his high school career, which sits atop the all-time Unionville list, and chipped in 26 assists. It’s an indication that Hewes was an effective player throughout his four years with the Indians.

“I was blessed to have him for four years,” Garber said.

“Being at the top of that list now is an honor and it means a lot of me,” Hewes added. “The program’s been successful throughout the years and there are a lot of great names on that list.”

Hewes came onto Garber’s radar when he first saw him in gym class as a seventh grader at Patton Middle School. He was impressed with his skill level from the start.

“Then I watched Michael on his club team (Penn Fusion) between eighth and ninth grade, and he was a fabulous player,” Garber said.

As a freshman, Hewes saw lots of playing time on the varsity and eventually earned a starting spot despite facing a big learning curve and some steep physical disadvantages. Garber says that Hewes was forced into early duty, but he grew and figured it out.

“He is pretty smart,” Garber said.

“I was pretty tiny back then, too,” Hewes acknowledged. “But getting throw in my freshman year against kids who are three, four years older and a lot bigger really helped me to learn to move the ball quicker and maybe not take as many touches.”

Two seasons later, Hewes kicked his game into another gear and scored seven times in the 2018 postseason, including the only hat-trick of his career in a first round state tournament win against Williamsport. He did the same in ’19 with a late-season goal at Downingtown East in overtime to secure the outright Ches-Mont crown. Hewes later scored twice in a District game against Abington with his team facing elimination.

“Downingtown East was definitely the biggest goal I scored in my career,” he said.

“In the playoffs, he would shift into another gear,” Garber explained.

“And that goal against East gave us the league title. That was something special. It enabled us to do something we hadn’t done in five years: win an outright league title.”

The only son of Mary and Bryan Hewes or West Chester, Michael has a sister, Carly, who play Division I field hockey at Quinnipiac. He has verbally committed to play soccer at Penn.

“This season was tough – I was man-marked pretty much every game,” Hewes recalled. “This year I really had to adjust to how I played to draw defenders away and make more space for my teammates rather than being on the ball all of the time.

“Finishing is probably one of the strongest parts of my game. When I’m in positions to score, I either take it or force the goalie to make a good save, which can lead to a rebound or a corner.”