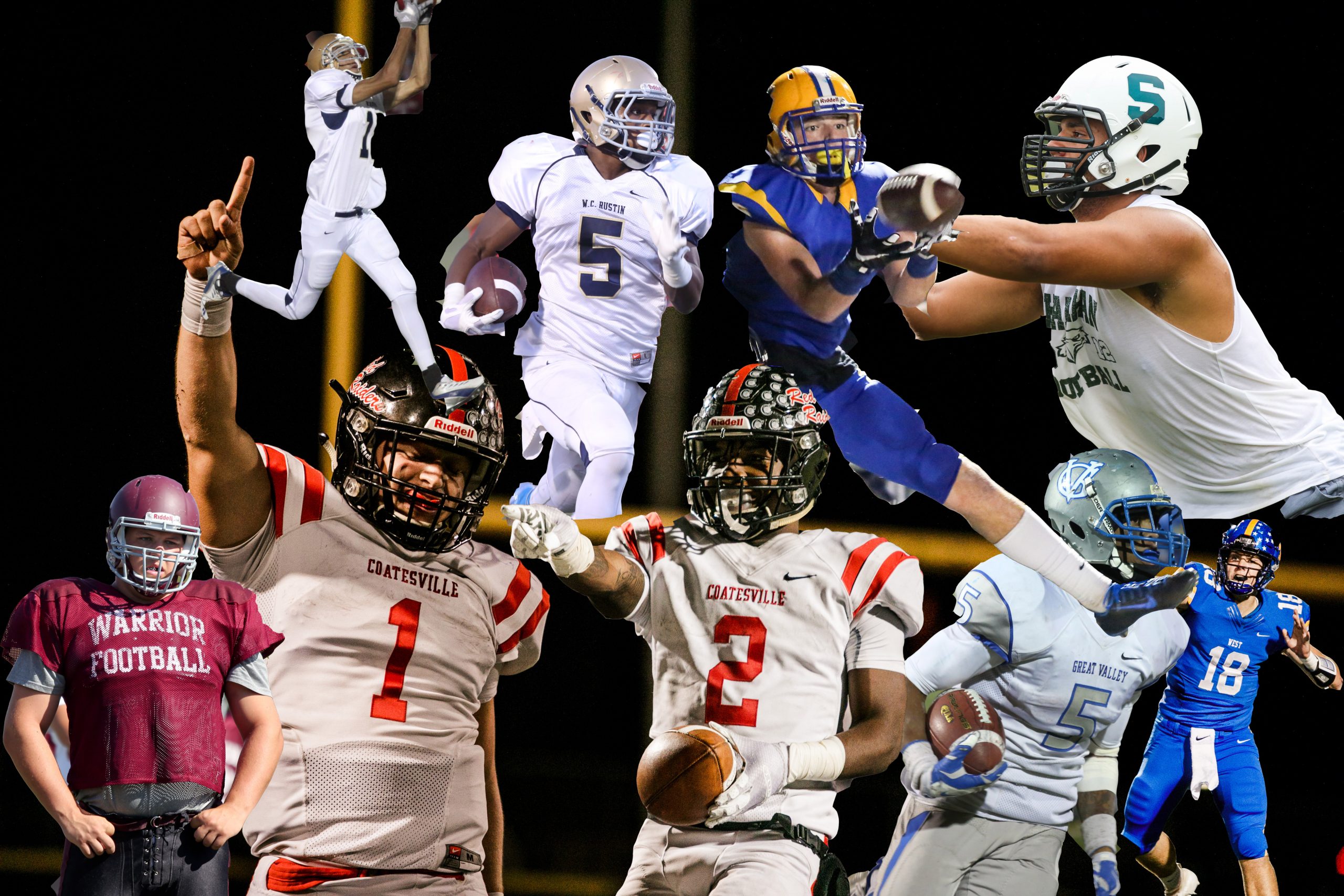 A three-year starter, Howard finished third in the decade with 5,940 yards and 52 touchdown passes, leading West to its first district title. He is committed to play at Kansas State University.

Finished second in school history with 5,602 rushing yards. Set a county record with 113 total touchdowns. Also starred at cornerback and is now playing at Rutgers University.

He has the Rustin record for career rushing yards with 4,758, the second-highest total in the Ches-Mont, this decade. He scored 55 offensive TDs and went to the University of Maine.

Set a school record with 24 touchdown receptions in 2012, helping Raiders to state final. He finished with 114 catches, 2,285 yards and 38 TDs. He played at Coastal Carolina University.

Owns Ches-Mont records with 194 receptions, 3,708 receiving yards and 54 receiving TDs. He scored 74 times as a four-year varsity player and will continue his career at Villanova University.

A huge target, he finished third in the league with 2,313 receiving yards this decade. He caught 146 passes and 29 TDs, and is currently playing at North Carolina State University.

Was a two-time first team All-Area as the top lineman for the Whippets. After playing at the University of Massachusetts, he is now a starter for the Denver Broncos in the NFL.

A three-year starter in the middle of the always-powerful East offensive line, Menzie was known for his strength and savvy in leading the top rushing units in the National Division.

Another multiple-year starter for the Cougars, Regitz played a huge role in three running backs rushing for over 1,000 yards in 2017.

Started all four years and was voted the Offensive Lineman of the Year three straight seasons in the American Division.  He went on to play for Bryant University.

A four-year starter for the Golden Knights, Hoyt was named the Daily Local Player of the Year following the 2010 season. He continued his career at the University of Maine.

While the skill positions got all the glory in Coatesville’s run to the state finals in 2012, Morgan captained a very stellar offensive line. He made 39 consecutive starts.

Broke out midway through the 2012 season and finished with 3,254 career rushing yards and 38 offensive TDs. Also starred at cornerback, scoring TDs off interceptions and kick returns.

Was the star receiver for multiple seasons, finishing with 108 receptions for 1,661 yards and 25 receiving TDs. He also played out of the backfield and was a major threat in the return game.

The first team All-Area kicker in 2017 made 98 extra points and 13 field goals in his career and is currently the starting kicker for Coastal Carolina University.

A state champion in wrestling, Boykin was a force in the interior and was voted Defensive Lineman of the Year twice in the National. He went on to wrestle for North Carolina State.

A two-way starter, Costin’s presence was felt more by opposing offenses who often double-teamed him to no avail. He is currently starting at Miami University of Ohio.

A first team All-State defensive end in 2014, Buchholz was one of the catalysts on Great Valley’s district championship team. He went on to play at Penn State University.

Anchored one of the most dominant defensive lines in the area, of this decade, as a three-year starter. He now plays for The College of William and Mary.

The National’s Defensive Lineman of the Year in 2014, White was an immovable force on the inside. He went on to play at Villanova University.

The leading tackler on the Red Raiders’ stater runner-up team was all over the field and was the Daily Local Player of the Year in 2013. Finished college career at University of Rhode Island.

In the middle of it all on those vintage, defensive-led Warrior teams. He was voted Linebacker of the Year in the National in 2011 and played college ball at Villanova University.

What you think of when you picture a Golden Knight football player, Steinmetz was voted Player of the Year in the American as a two-way starter. He played at West Chester University.

The heart and soul of a Warriors defense that allowed just nine touchdowns in 2012 on a team that reached the district championship game.

A star on both sides of the ball, will be forever remembered for the district title-winning pick six against Garnet Valley in 2017. He is now a starting cornerback for Rutgers University.

Was named the Daily Local Player of the Year in 2011, as a star running back and cornerback. He then played for Coastal Carolina University.

Set a school record with 12 career interceptions, doubling as an explosive receiver on offense. Jennings is currently playing at Temple University.

Led the area with five interceptions as a senior on the 13-win 2014 Red Raider team and went on to play at the University of Rhode Island.

The key player on Unionville’s district title team, Zubillaga played receiver and quarterback, and had a knack for timely plays on defense. He is a linebacker at the University of Delaware.

A lethal weapon in the defensive secondary, at receiver and returning kicks for the 2014 district champs, he played at the University of Delaware, and is a safety for the Los Angeles Chargers.

A pretty good quarterback in his own right, Pechin made a name for himself as a punter and kicker and just finished a successful career at Bucknell University.

Ches-Mont League became the standard in 2010s
All-Delco Girls Soccer: Leyden made all the stops as Agnes Irwin soared in Inter-Ac