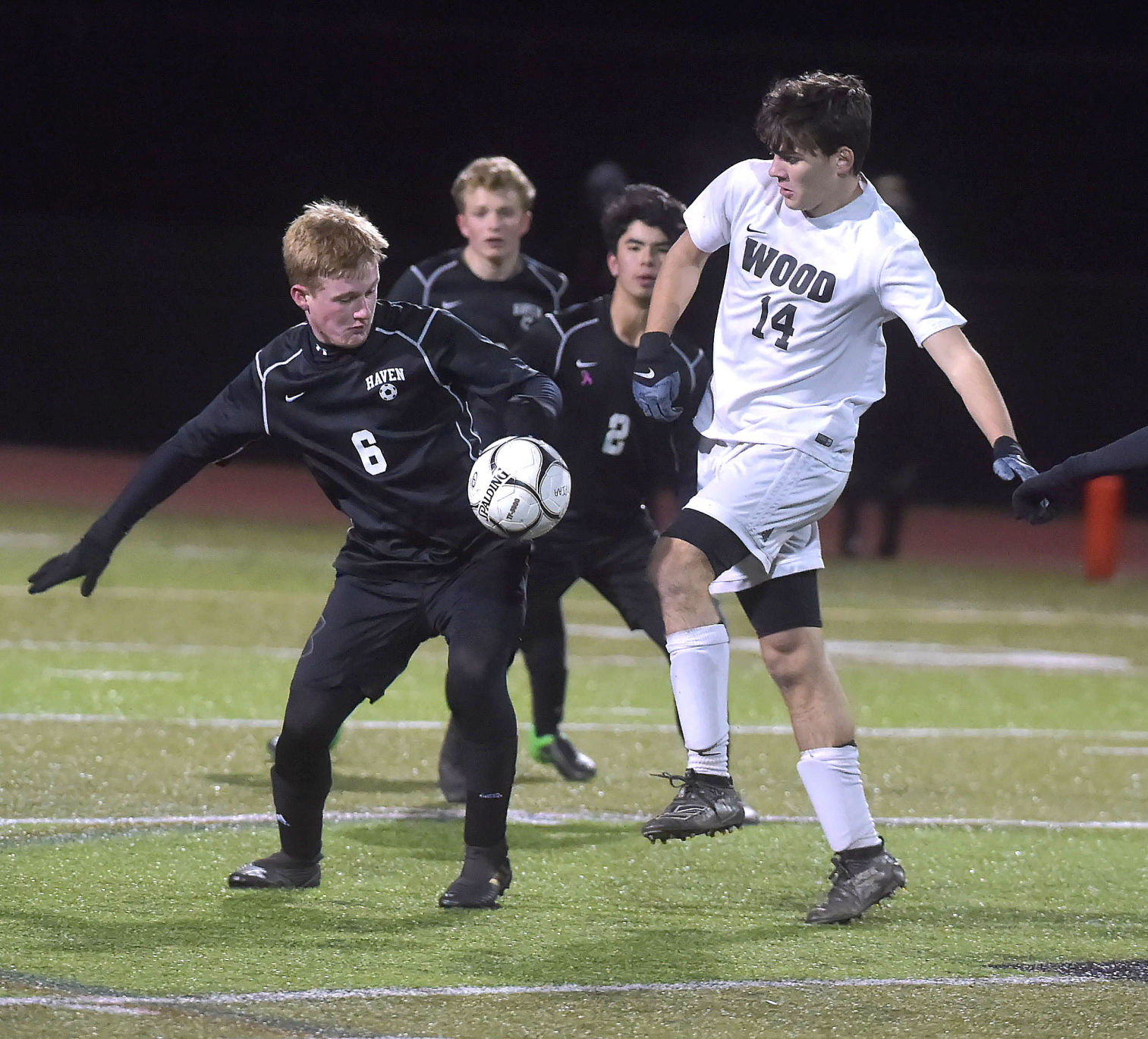 WORCESTER — It had been a while since J.T. Holstein made the walk to the Strath Haven bench while the clock was still running. Certainly it was the first time in the Panthers’ six postseason games that the senior outside back made his way to the pine.

So when Holstein was whistled for a yellow card for an overzealous sliding challenge on Archbishop Wood midfielder Ryan Morgan in the waning minutes of the first half of the PIAA Class 3A boys soccer semifinal Tuesday night, he headed to the bench with his head down and sat apart from his teammates with some trepidation.

Strath Haven’s Jake Hooper scored in the second period to help Strath Haven post a 2-0 victory over Archbishop Wood in a PIAA Class 3A state semifinal game Tuesday night. The victory earns Hooper and the Panthers a return visit to the state championship game Saturday in Hershey. (Pete Bannan/MediaNews Group)

Holstein found a way to atone, and then some. He headed home a goal in the second half and helped the Panthers keep their second straight clean sheet, on the way to a 2-0 win over Wood at Methacton High and a second consecutive trip to Hershey for the state title.

The win moves Haven (16-7-1) back to the Class 3A state championship game, where they will take on Lower Dauphin, the District 3 champ that upended District 7 champion Franklin Regional, 2-0, Tuesday. Haven lost last year to West Allegheny, 4-0; Lower Dauphin ousted West Allegheny in the quarterfinals this year.

Holstein’s five-minute breather was the first time any of the Panthers’ back four – Holstein, Luigi Malo, Harris Hardy, Simon Bolinger – had sat in quite some time. Given the cohesive unit they form, one that far outstrips that collective sum of their talents, the Panthers had no reason to rotate at the back.

But as a scoreless game was getting stretched, Holstein leaped into Morgan in his own half. And while nervous, the Panthers adjusted seamlessly. Jake Hooper, who started the season on the backline, dropped from holding midfielder to right back, and Peter Boerth slid from striker to the No. 6 spot.

“It wasn’t a smart foul because we were so far from goal,” Malo said. “But when we have other good people to replace him like Jake Hooper and pushing Peter back to the six, we have more replacements. It was hard for us but we also worked it out at the same time.”

As it turned out, both the temporary and permanent right backs would impact the game after the break.

Haven goal! Its Jake Hooper off a corner. Panthers up 1-0 in the 44th pic.twitter.com/GHGI8m7cv7

First was Hooper, the 6-foot sophomore who is always a prime target on set pieces. On the Panthers’ fourth corner of the day, Andrew Lowman picked out Hooper at the far stick with an out-swinging, right-footed delivery, and Hooper shed his marker just enough to throw himself at the ball and send it into the net for the opening goal in the 45th minute.

Since Wood didn’t stop it, Lowman went right back to it seven minutes later, this time with a more forceful nudge from Holstein.

“Going to hit the second one, JT goes, ‘hit it far post,’ because that’s his run,” Lowman said. “And I hit it there, and he finished it, which was amazing.”

“I told Andrew to put it in one spot the way I wanted it,” Holstein said. “He put it right where I wanted it.”

Holstein held up his end of the bargain, the diminutive outside back not as heavily marked in the box. He punished the Vikings for their leniency, planting the header authoritatively past goalie Shaine Kirby.

Lest Haven need any reason to guard against a letdown, they would’ve recalled that last year they led Wood, 2-0, in the semifinal before rallying for a 3-2 victory. There would be no such déjà vu on this day, however. The defense made sure of that. Wood didn’t have a shot on target in the first half. Their first effort was a speculative effort by Morgan, the Catholic League Player of the Year, from outside the box, all he could get while constantly being frustrated by the Haven marking.

Holstein was again the hero two minutes after his goal, clearing a goal-bound header from midfielder Shane Collier off the line, before Charlie Shankweiler got his gloves around a bicycle kick effort by Giuseppe Propato to extinguish one of the few genuinely dangerous moments Wood produced.

Shankweiler easily handled an effort by Roberts late on, his third and final save to make it two consecutive clean sheets and just one goal allowed in three states contests. Even late, with Malo hobbled by a leg issue, the Panthers were comprehensive in clearing their lines.

With the win, Haven has accomplished another of its preseason goals. In addition to repeating as the District 1 champ, they’re back in the state final. They replaced more than half of the starting XI from last year, including Daily Times Boys Soccer Player of the Year Nate Perrins. So it’s not idle hype-up banter to say that not many expected them to return to this level.

Yet they’re going back to Hershey, an achievement that carries a ton of prove-the-doubters-wrong pride, and with a clear idea of what they need to do to rectify last year’s loss.

“It’s very exciting, especially as a senior,” Malo said. “It’s probably one of my biggest accomplishments.”

“We lost a lot of talent, a lot of good players,” Lowman said. “But we knew coming into this season that we had another good chance. And we knew what it takes to get there. We’re a lot more experienced to get there and a lot more ready to get to Hershey and hopefully win it.”