Hill School stunned by Kiski on PKs in PAISAA semifinal 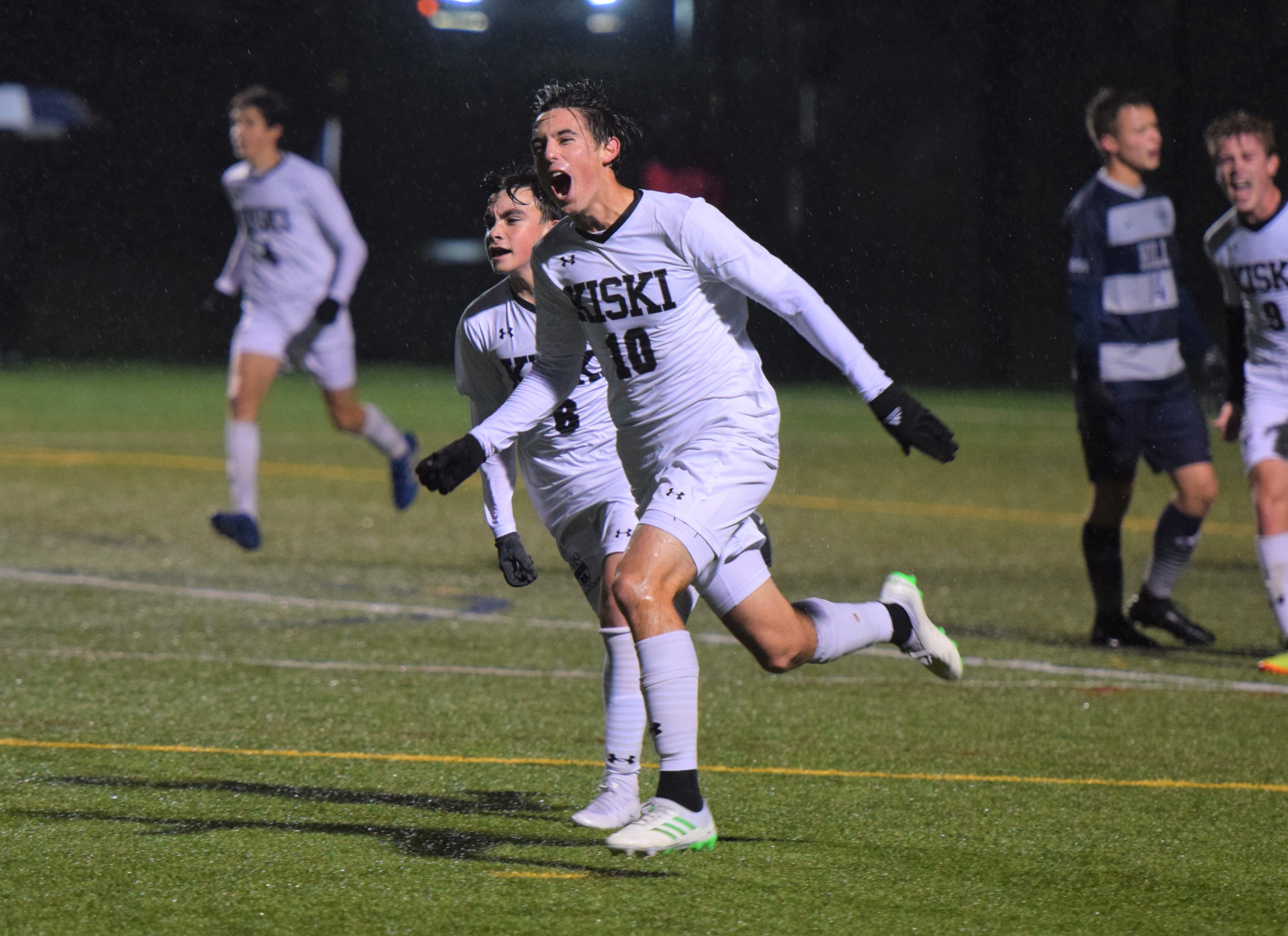 POTTSTOWN >> After The Hill School boys soccer team clawed back from an early two-goal deficit, the game-winner seemed like it was coming. And still coming.

And then, once penalty kicks were made to settle the score, the game-winner came. Except it came from the boot of Kiski School senior Mark Shoebridge.

Hill School, the Mid-Atlantic Prep League champion, was denied a return trip to the state final after three straight seasons making it to Immaculata for the final. Instead, No. 4 seed Kiski, out of Saltsburg, Pa. (33 miles east of Pittsburgh), is headed to the final to face No. 3 Haverford School, which downed reigning champion Springside-Chestnut Hill in Thursday’s other semifinal, 2-1. The title game will be held Wednesday, Nov. 13, at 7:30 p.m. at Immaculata.

Hill (14-4-1) cut into Kiski’s 2-0 lead just before halftime when senior captain Zach Barrett set up senior Jordan Mugisha’s 35th minute score. Standout senior forward Baba Kallie then leveled the match on a free kick around the wall from just outside the penalty area in the 59th minute. The Blues felt like the likelier winner through the rest of regulation and two five-minutes overtimes with Barrett, Mugisha and Kallie creating more than a couple great scoring chances – the best came with 7:32 left in regulation on a hustle play from sophomore Sam Beckett that got Kallie behind the defense, but his left-footed effort was nudged by wide by Kiski junior goalkeeper Gabriel Matos. Ultimately, the winner never materialized for Hill.

“I think for the first 25 minutes they out-played us,” Hill head coach Chris Drowne said. “They came out and they finished (their chances). But for the last 55, the field was totally tilted our way. We certainly felt like we deserved to be on top by the end of regulation. But when you get past that, it’s a lottery. Even in overtime, I thought we created a lot of chances, but just didn’t finish. They took five well-taken penalties and put them away.

“We’ll shake out heads for a little while over not getting the third.”

“There were a lot of ups and downs in the game, but give credit to the boys, they stuck at it,” said Kiski third-year head coach Jonty Loukes. “It doesn’t matter if you win in regulation, you win in overtime or you win on penalties, it still feels as good.

“They’ve got heart. And I think more than anything it’s about who’s got the nerve. If you can hold your nerve and put the ball in a place that’s difficult for the goalkeeper, you put yourself in a position for things to go your way.”

Junior goalkeeper Matos starred on the other end for Kiski, making 15 saves, including a stop of Beckett’s PK in the second round that set up the winning margin.

“I’m confident in our goalkeeper,” Loukes said. “Believe it or not, we’ve given away eight penalty kicks this year and he’s saved four of them. Quietly confident in his ability in a shootout.”

Hill defeated Kiski 2-0 in the regular season, on Sept. 6. Kiski found a way to turn the table by thwarting the quality Loukes admires most in The Hill.

“They’re always clinical,” Loukes said. “One chance, one goal. That’s something I envy about them and admire. It’s highlighted on the calendar every year as one of toughest games of the year and it never fails to deliver.”

While Hill’s PAISAA run was cut short, the Blues’ season will be noted for a second straight MAPL title, and a 5-0 run through the league, punctuated by 2-1 win over Lawrenceville on Nov. 2.

“This is only the second match we’ve dropped in nine weeks and it’s been a good run. Certainly all thirds of the field came together with a still very young team,” Drowne said.

“We had our banquet after Lawrenceville as we always do, and the most important tone that a senior class sets is the culture,” Drowne said. “They know the culture they wanted to have when they came here and joined this program and they knew how they wanted to take that culture to another level and build off the work that last year’s cohesive class did. The under-formers certainly played really big roles on the field, but they know much the seniors meant on a off the field.”

NOTES >> Kiski coach Loukes was full of praise for Kallie: “(Kallie) is a fantastic player up front. I can’t speak any higher of a kid like him, his movement is fantastic, he’s got a great first touch and quite honestly his speed is frightening. Obviously he’s had a great year here at Hill, and next year at Navy, I’m sure he’s going to have a fantastic career in college.”