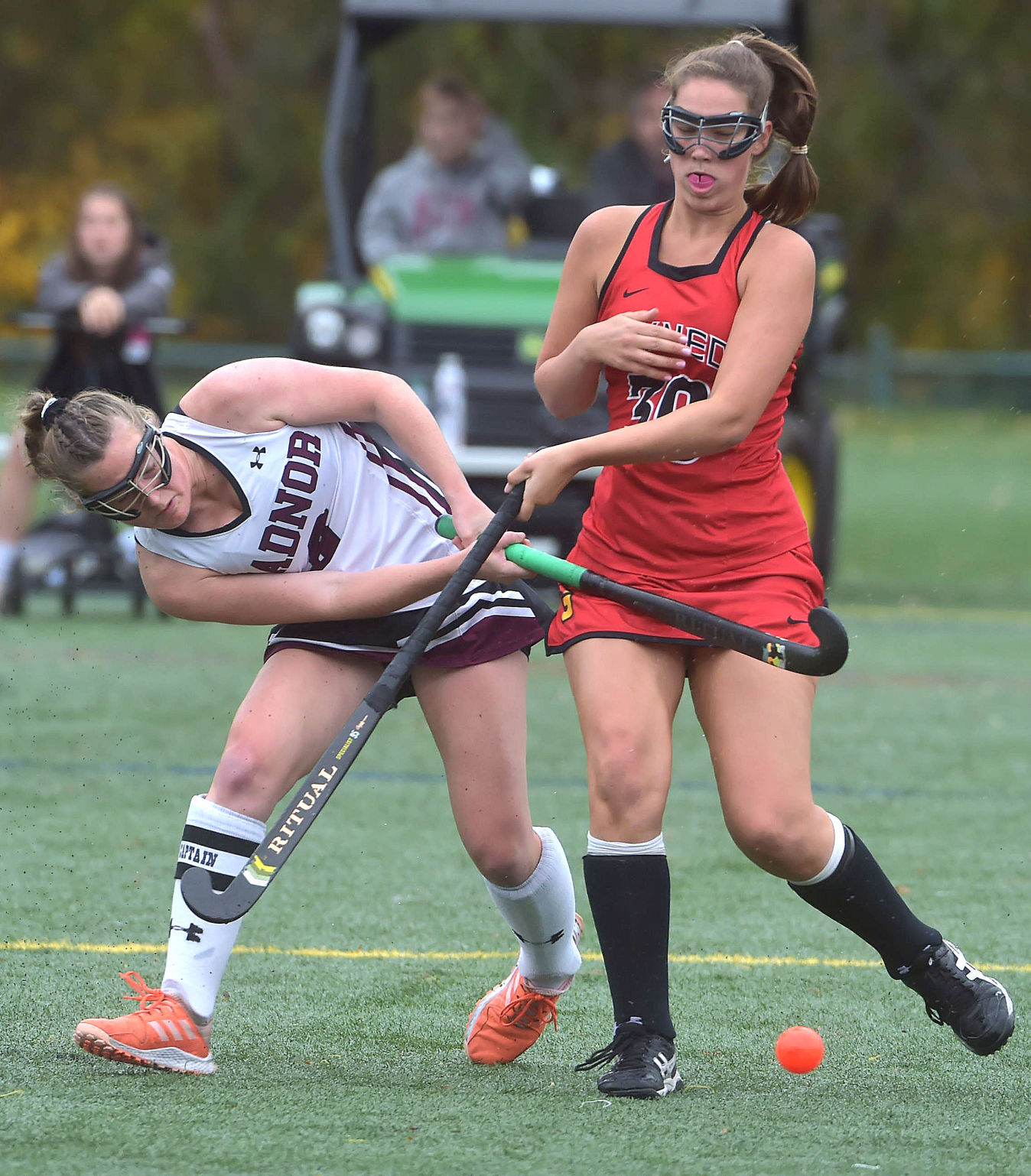 Radnor's (6) Brigid Lowry strikes the ball in the first as Gwynedd Mercy's (30) Alex Wenz defends in the first half of a District 1 Class 2A playback game Tuesday. The Monarchs upset the top-seeded Raiders with a 4-2 victory, ending Radnor's season.

RADNOR – At first, it was a time for pleasant greetings.

In the end, there were some somber words of goodbye.

With the win, the Monarchs advanced to the district fifth-place game Friday, in which they will host No. 5 seed Mount St. Joseph, which defeated Wissahickon in overtime, 1-0, Tuesday night. The winner of Friday’s match will qualify for the state tournament while the loser will have its season come to an end.

During the pre-game meeting of the officials, coaches and captains, there were plenty of friendly greetings. Gwynedd Mercy head coach Alex McMahan is the director of the Main Line Mayhem club program, for which many of the Radnor players compete during the spring and summer.

“She was one of the ones who taught a lot of us about playing hockey,” said Raiders senior Brigid Lowry, who scored Radnor’s first goal Tuesday. “It was nice to see some of their players, but you knew how hard they would be working.”

The game was almost rerun of Radnor’s playoff loss to Villa Maria last week. In that contest the Hurricanes scored three goals before the first half reached its midway point.

Tuesday, the first Gwynedd Mercy goal came in the seventh minute off the stick of sophomore Alaina McVeigh, who plans to attend Duke University, where she will be a teammate of injured Radnor senior co-captain Barbara Civitella.

Fifteen minutes later, McVeigh knocked in a feed from Caroline Sweeney to double GM’s advantage. Less than 20 seconds later, it was the Monarchs’ Hanna Saxon scoring, assisted by Aiden Bocella. The goal put the halftime score at 3-0.

“Everyone had a goal, whether it was individually or as a team,” McMahan said. “They wanted to come back strong from our loss to Merion (Mercy) the other day and have the chance to get to states.”

In the second half, Radnor got goals from Lowry and senior Maggie Rosoff three minutes apart and trailed, 3-2, with 14 minutes to play.

“We finally started getting tough in the second half,” Rosoff said. “And we started getting after it. This year has been so much more fun than any of our other years here.”

It took a little time for Gwynedd Mercy to put things back together.

“They put a little scare into us there,” McMahan said. “But our last goal was a really great shot.”

That goal came from the stick of Morgan McMenimen, who lifted the ball into the upper corner of the Raiders’ cage six minutes after Rosoff scored.

Lowry and the other Radnor seniors were freshmen when Katie Maguire became the Raiders’ head coach.

Maguire did her best to put into words what the group of seniors who will be turning in their uniforms in the next few days meant to her and the Radnor field hockey program.

“I’m not sure I’ll see a class like them for a long time around here,” the former Radnor player said. “They’ll always have a special place in my heart.”