Forbes, Strath Haven bond in grief, beat Nazareth to get to states 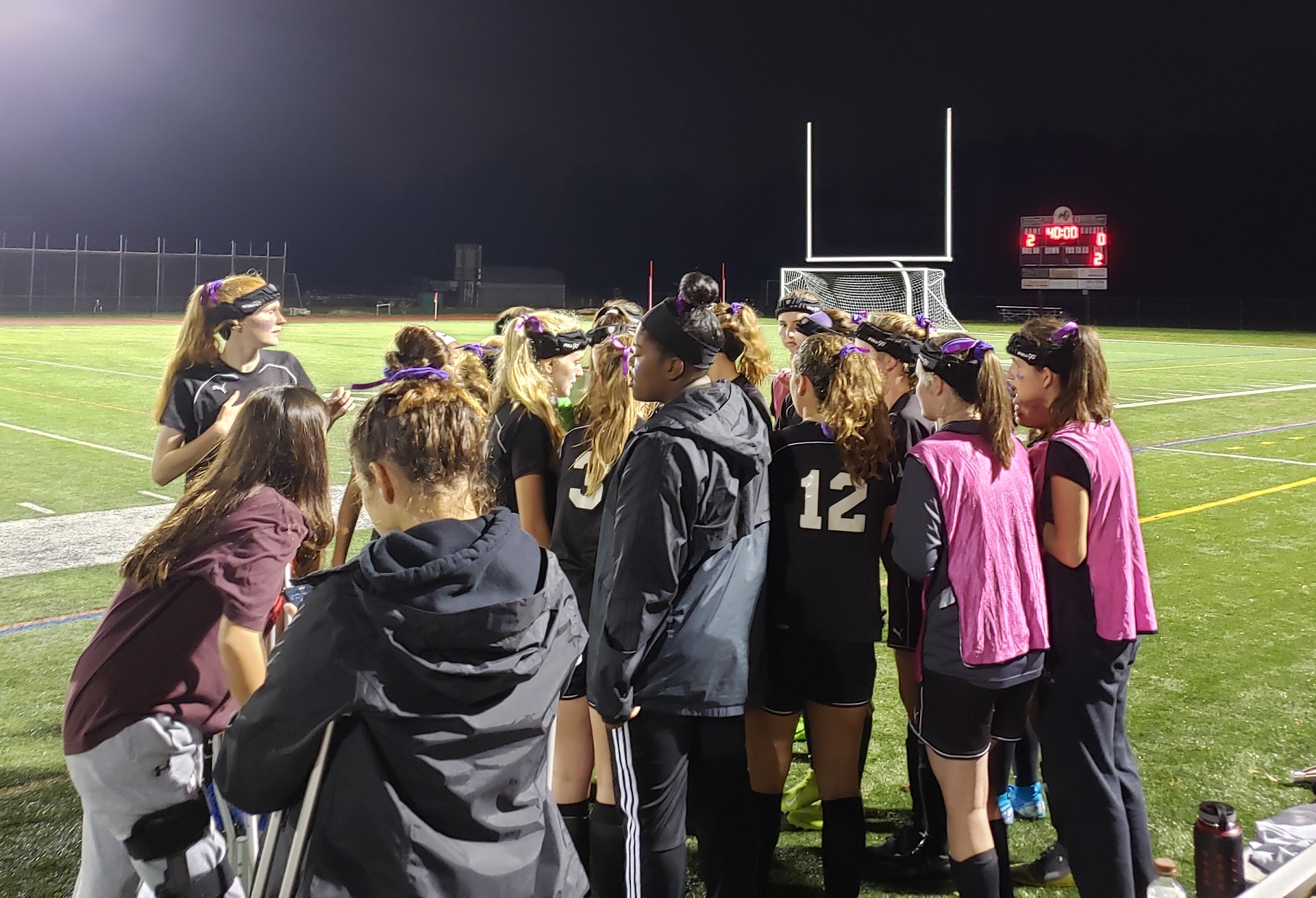 NETHER PROVIDENCE — The moment of silence held for a full 20 seconds. There was no muffled conversation, no ring of a cell phone, just a sniffle fought by one of the players sporting a new purple ribbon in her hair and the distant hum of traffic on the Blue Route.

The air of solemnity at George L. King Field Tuesday night soon gave way to focus, to catharsis, and eventually to celebration.

Two first-half goals by Maggie Forbes and a stellar performance by goalie Claire Wolgast earned second-seeded Strath Haven a 2-0 victory over Nazareth Academy in the District 1 Class 3A girls soccer semifinals. With it comes a states berth and a date in Wednesday’s district final against nine-time champ Villa Joseph Marie (Phoenixville H.S., 5 p.m.).

Strath Haven’s girls soccer team poses for a photo after beating Nazareth Academy, 2-0, Tuesday to earn a spot in the PIAA Class 3A tournament and the District 1 final. (DFM photo)

More importantly, for a group of students playing with heavy hearts, a group that would’ve found each other for comfort Tuesday whether a soccer ball had been involved or not, it’s a guarantee of at least two more games together.

Tuesday’s game was postponed from Monday when the Strath Haven community got news of the death of junior Hallie Jackson. A state medalist in track, Jackson counted many close friends on the Strath Haven squad, so much so that the group decided Monday that it was too distraught to play.

The tight community that is Strath Haven – particularly its small but passionate athletics programs – rallied around the soccer team. They filled a full section in the stands, many clad in purple. Both Nazareth and Springfield, the team Strath Haven beat in the quarterfinals, offered bouquets of flowers to extend condolences. The chant in the huddle to start the second half was of “1-2-3 Hallie,” not that anyone packing the stands needed a reminder that something bigger than soccer was at play.

“Coming here at 6 p.m., it was of course still in our mind, but soccer was first,” Wolgast said. “And it was nice to have a break from all the, just terrible feelings we were all having. Seeing all the fans coming out, it was just for everyone, I think, just a good break.”

“Being on the field, it’s a safe place because you’re not really thinking about it,” said defender Danielle McNeely, a classmate and close friend of Jackson. “It really helped us winning for her.”

That devotion crept into the Panthers’ play from the outset. They were relentless, winning three corners kicks in the first seven minutes. The third yielded a goal from Forbes, heading home the curling delivery of Dahlia Kuzemka for the opener.

“I always tell her how important she is because no one can defend her on corner kicks,” McNeely said of Forbes. “She’s always at the right spot at the right time, and she finishes it.”

Forbes did it again in the 27th, this one diagrammed on the training ground. With the Panthers packing all their players toward the left touchline and Kuzemka lining up a free kick from 30 yards on the right side, Forbes got the jump on a defender and cut in on a ball played on the ground toward the top of the area. The track athlete beat her defender to the ball and hit a low shot against the grain that Nazareth goalie Katie McGinn got a piece of but couldn’t keep out to make it 2-0.

Nazareth tipped the scales from there, but couldn’t beat Wolgast, who was sensational with nine saves. Her best came in quick succession with eight minutes to half and the Panthers desperate to get to the break up two. Nazareth reserve Liv Watson stung a shot from outside the box that Wolgast parried with two hands while diving to her left. It fell right to forward Katie Harmon on the doorstep, but Wolgast popped up quickly to stand tall at the near post, pushing the shot over the bar.

“It’s so much more fun (to be busy) and obviously when you get the win, it’s a lot more fun,” Wolgast said. “And you feel just more a part of the team and you can talk as if you’re a part of the game, and it’s great.”

Wolgast made six saves in the second half. She denied Harmon’s sharp-angle drive by pinning it to the post with her boot after midfielder Brooke Kane played Harmon down the right wing. She smothered a Kirstyn Kinniry shot in her grasp long enough to get a foul called when she absorbed contact, nullifying Nazareth putting the ball in the net a moment later. And she plucked a drive from defender Maddie Blackshire out of the air late in the game.

The rest was done by a defense that, while starting a freshman and a sophomore, tidily prevented the most dangerous opportunities.

“It’s really easy to trust them because we’ve been playing together all season,” McNeely, the elder statesman as a junior, said. “And just knowing that we have everyone’s back if we do get beat, knowing someone will help you. It really helps.”

As the Panthers walked off the field, reality began to set in again, tears of celebration giving way to the mournful tears of a day earlier. Their achievement together Tuesday, however, was a powerful reminder of what they can do together, in Jackson’s name.