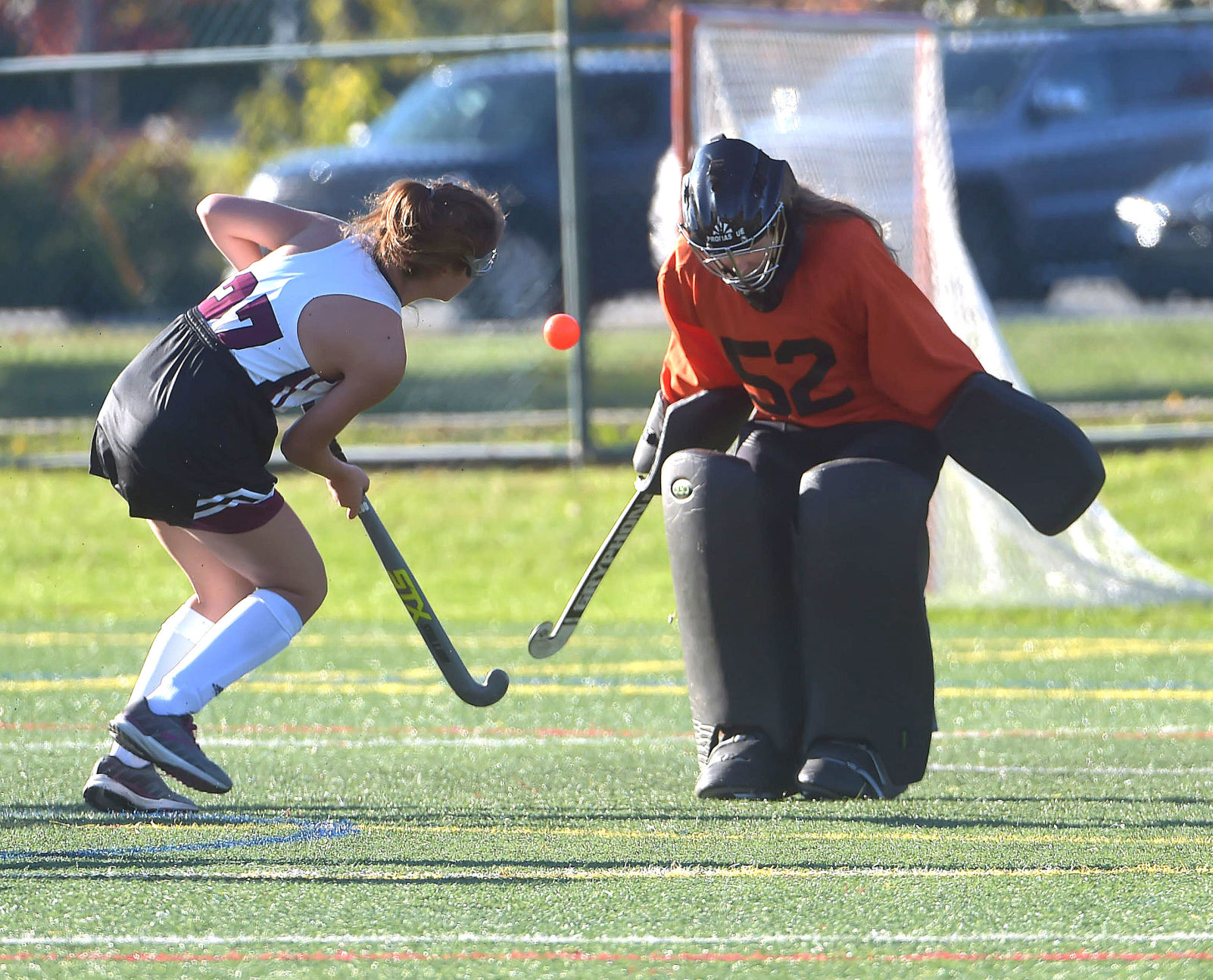 Radnor's Maggie Rosoff is denied by Villa Maria goalie Vicki Kimmel in the first half of a District 1 Class 3A second-round playoff game Thursday. Kimmel and the Hurricanes earned a 3-0 victory.

RADNOR — According to Radnor field hockey coach Katie Maguire, the Raiders “have been a second-half team all year.”

In a PIAA District 1 Class 2A second-round playoff game at Encke Field Thursday afternoon, it was ninth-seeded Villa Maria (12-8) which had a big first half on its way to a 3-0 victory over No. 1 seed Radnor (16-3).

The Hurricanes, who qualified for the PIAA Class 2A tournament with the win, will face No. 5 seed Merion Mercy (16-3-1), in a semifinal round matchup Tuesday while Radnor will host a play-back game the same day as it seeks to qualify for the state tournament as the district’s fifth seed.

Sophomore defensive midfielder Maia Dechario tipped in a pass from Lindsey Roberts for the first goal 2:27 into the opening half.

A little more than six minutes later, it was Meg Dillon connecting for the visiting Hurricanes, assisted by Annie Shaw.

Radnor’s (9) Janie Hoysgaard competes with Villa Maria’s (30) Maia Dechario for the ball in the first half. (PETE BANNAN/MEDIANEWS GROUP)

After that, it was up to VM junior goalie Vicki Kimmel to hold off the Radnor rush in the second half. Kimmel knew what to expect from many of the Raiders, who are her club hockey teammates in the Main Line Mayhem program.

“It was hard knowing I would have to face people who have been my teammates,” said first-year varsity starter Kimmel. “The thing that really helped was getting that first goal so soon, and then scoring two more times before halftime.

“I know I couldn’t have done it without the defensive help I got from people like Colby (Dobra), KP (Kate Perretta) and Adriana (Yacovelli). We had had a little slump earlier in our season, but as the season has gone on we’ve been playing better and better.”

Dechario and Caroline O’Brien, who also is a sophomore, were among the players who turned in solid defensive performances.

Second-year Villa Maria head coach Katie Evans has been delighted with the way Kimmel has played in her first season as a varsity starter.

“She’s just been so dependable for us back there,” Evans, who began her scholastic career at Marple Newtown before transferring to Villa Maria, said.

“We played well,” O’Brien said. “That they were the No. 1 seed and they were playing on their home turf helped in getting us ready for this game. We did what we wanted to do when we came here.”

Dechario was involved in things on attack, at midfield and in the defensive zone throughout the game.

“Whether you’re an attacking midfielder or a defensive midfielder you know you’ll end up everywhere on the field,” she said. “I happened to be all the way up the field when I scored that first goal.”

Radnor’s Maguire was disappointed that her team was knocked off in the second round of district playoffs as a top seed for the second year in a row.

“I wish we had played with the intensity we showed in the second half from the beginning of the game,” she said. “Being a second-half team isn’t good if you fall behind like we did in the first half.

“We’ve got to move on from this game and get ready for another tough game next week if we want to keep our season alive.”