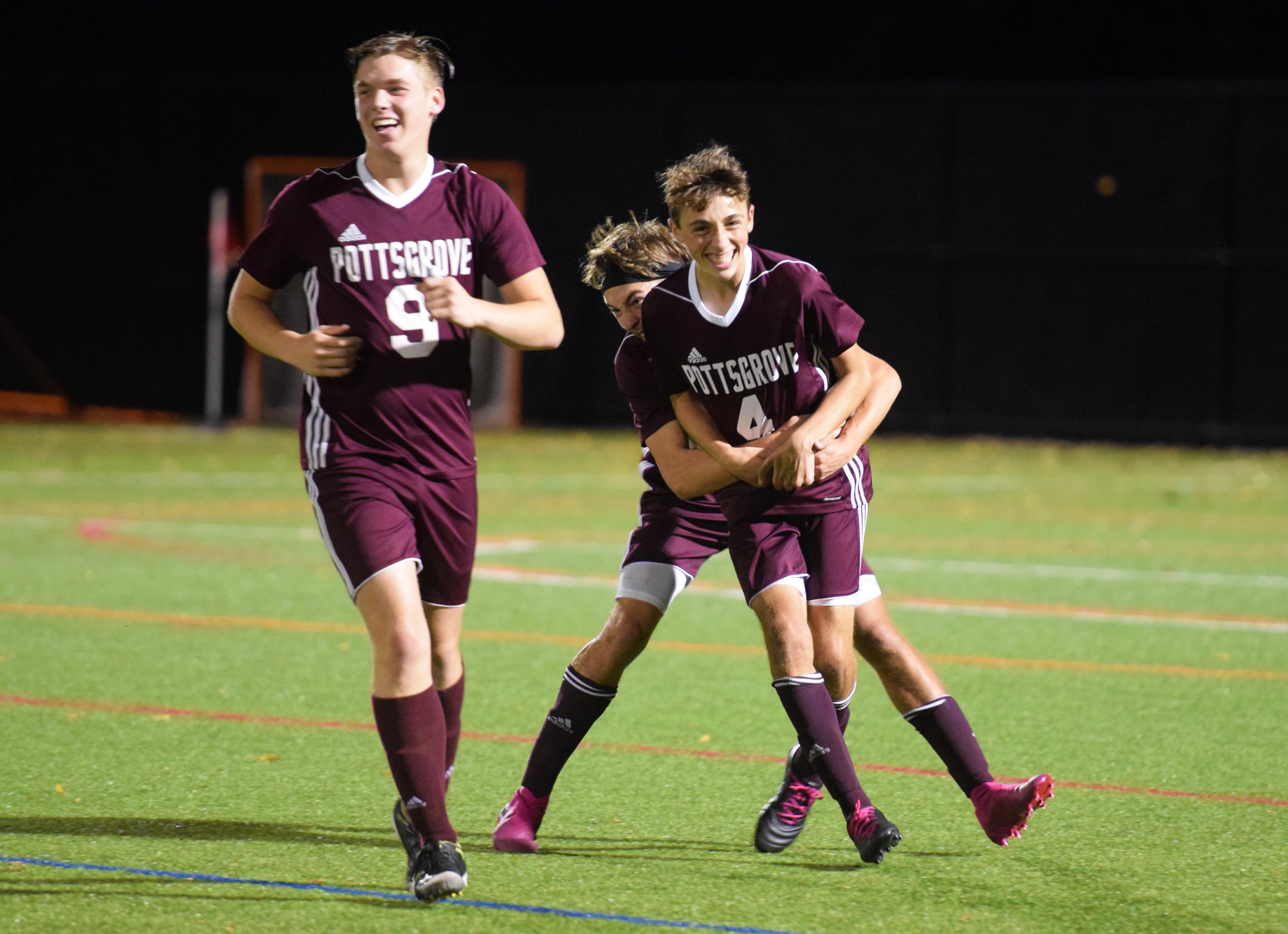 Pottsgrove’s Jeremy Thompson (4) gets a hug from Mike Troutman after his hat trick led the Falcons past Lower Moreland in a District 1-3A playoff game Wednesday. (Austin Hertzog - MediaNews Group)

In that short time frame Wednesday evening, Thompson went from a one-goal performance to a record hat trick. And Pottsgrove went from a close game with Lower Moreland to a 3-1 victory in the opening round of the District 1-3A playoffs.

Thompson got the Falcons the early lead six minutes in, heading a ball into the net at the 34:41 mark off Ethan Pace’s free kick. That 1-0 lead stuck until the 27th minute mark of the second half, when the sophomore connected twice for the program’s first-ever individual three-goal showing in the post-season.

It all moved second seed Pottsgrove (13-3-1) one step closer to a berth in the district’s championship game. A berth in the state playoffs is another bonus coming closer to fruition for a Falcon unit that finished atop the Pioneer Athletic Conference’s Frontier Division and qualified for its Final Four playoffs.

“I felt my teammates set me up, in the right place at the right time,” Thompson said. Thompson’s offensive outburst helped send Lower Moreland home for the season. The seventh-seeded Lions, on the heels of the goal flurry, finally got on the scoreboard when Bennet Durand, pushed inside the box, converted a penalty kick with 24:16 left.

But that was all the visitors were able to muster. The Pottsgrove defense handled all 15 of LM’s shots and six corners in what senior defender Collin Deckert termed a “clean sheet” performance, the penalty kick notwithstanding.

“We’re a young team,” Lion head coach Bob Barnhart said afterward. “I told them they came a long way. This group left it all out on the field.”

Thompson’s second goal at 26:59 came off a pass from Pace. The third, with Shane Gleason on the assist 38 seconds later, was a case of him capitalizing on a slight hesitation between the LM defense and goalkeeper on a ball behind the defense and putting it in the net.

“He has a nose around the net,” Pottsgrove head coach Jay Witkowski said of Thompson. “He’s calm and composed in front of the goal.”

In tandem with Thompson’s scoring, the Falcon “D” kept Lower Moreland empty in the first half. It was particularly stout at the end of the first half, when the Lions pressed the action in Pottsgrove’s end for a good part of the last five minutes.

“We wanted to stay smart and get the clean sheet,” Deckert said. “The only thing we worried more about than getting more goals was to keep the clean sheet.

“We were prepared to be up 1-0, but obviously we liked scoring more goals.”

His coach cited Deckert’s play in the middle as a key.

“He controls the game,” Witkowski said. “Even when things break down, Colin is setting things up.” In complement to the players in front of him, Pottsgrove keeper Luke Kaiser had five saves. Lower Moreland’s Alexander Amanatidis had seven stops.

Lower Moreland, for its part, came out in the second half with changes in its game plan directed at making up the one-goal deficit. But the Falcons spoiled the plans.

“We were looking to attack by opening the passing lanes,” Barnhart said. “But when it was 2-0, that closed the game a bit.”

Pottsgrove was back in action after being edged by Spring-Ford last Tuesday in the PAC playoffs, 1-0. It will host Holy Ghost Prep, a perennial district power, noon Saturday.

“When I think how good a team Spring-Ford is — to put out the effort we did in a close game — I know we can play schools the same size as us and compete,” Witkowski said.

NOTES >> Gleason was also credited with the assist on Thompson’s first goal. … Deckert on his role in the Pottsgrove defense: “I try to keep control of the game, to see everything in front of me. We played real well tonight.” … Barnhart noted a particular connection to LM’s eight seniors. “I coached the seniors back when they were in eighth grade,” he said. “I told them I was proud of the senior group. The underclassmen, I want to let this soak in with them, coming this far.” … Pottsgrove and Holy Ghost have gone 3-3 in recent head-to-head competition. The Firebirds are seeded third in 3A and coming off a 2-0 victory over Upper Perkiomen.