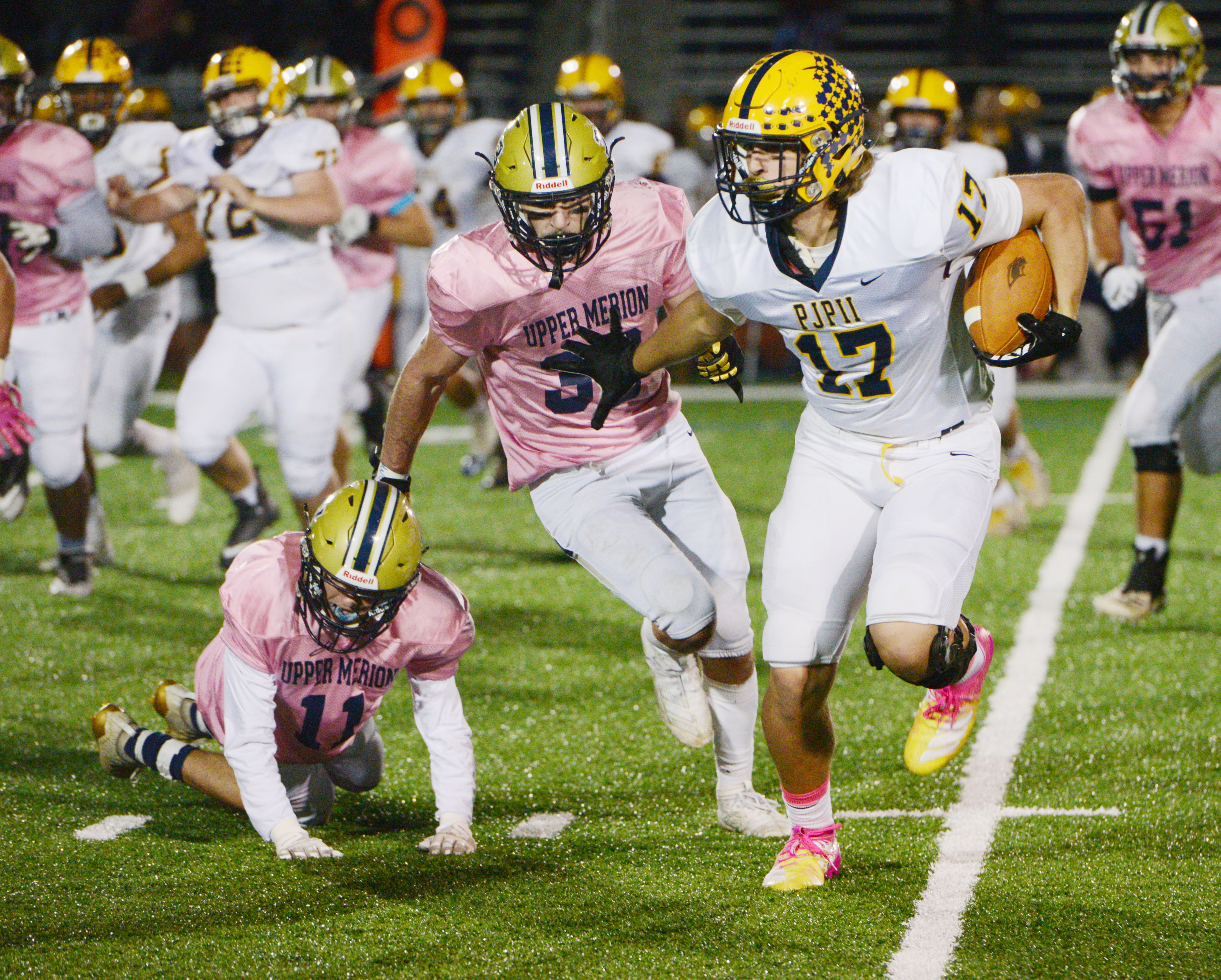 In two of their first three contests since Upper Merion joined the PAC in 2016, the Vikings and Pope John Paul II battled to the final whistle.

Another saga was added Friday night as the Golden Panthers spoiled Upper Merion’s senior night with a 28-21 victory that was once again in decided in the game’s final moments.

The Vikings had the ball late with a chance to tie the game, but PJP junior Rocco DiRico picked off a pass with 1:48 left to seal an undefeated Frontier Division mark for the Golden Panthers, who will face Spring-Ford in next week’s PAC title game.

“It’s a great rivalry,” DiRico said. “I know they were fighting for a playoff spot, so that was big. They just wanted to come out and beat us. They played a really good game, but we took it to them and finished strong.”

Pope John Paul II QB Kamal Gray was 20-of-28 for 238 yards and 3 TDs in Friday’s win over Upper Merion. Here he is after the game. pic.twitter.com/amLnmr5Nuv

The Golden Panthers (5-0 Frontier, 8-1), who had clinched a spot in the PAC championship a week prior, still had plenty to play for Friday night, including district playoff positioning (No. 1 in District 1-3A), along with bragging rights in a series that has seen some tight contests just four years in.

PJP quarterback Kamal Gray completed 20-of-28 passes for 238 yards and three touchdowns. Chris Bruder added 60 yards and a score on the ground to complement the passing attack.

After a 52-yard completion to Steve Skarbek on PJP’s first drive of the third quarter, Kormos caught a 21-yard touchdown pass from Gray to put PJP ahead 28-21 just two minutes into the second half.

Upper Merion (2-3 Frontier, 4-5) drove 73 yards down near the PJP goal line on the ensuing possession, but Kormos scooped up a fumble at the one-yard line to halt the Vikings’ advance. The Golden Panthers’ defense held Upper Merion to 74 yards on its last three drives to close out the win..

“Things were just pretty much open, and we executed,” Gray said of PJP’s offense. “It worked out well for us.”

“Our defense really stepped it up in the second half, shut them down and pulled out a nice victory,” he added.

Upper Merion celebrated its senior night before Friday’s contest. Senior running back Taiyan Lobban, whose favorite memory was returning the game-winning touchdown against PJP as a freshman, had another night to remember against the Golden Panthers in his final game at Vikings’ Stadium.

Lobban had two long touchdown runs on Upper Merion’s first two offensive drives, and added a 65-yard touchdown catch and run to tie the game 21-21 late in the first half. Lobban had 209 total yards and three touchdowns at halftime and finished with 186 yards rushing and 65 yards receiving. He added an interception to his terrific night in the second half.

Lobban, Swenda, Marc Clayton and Chris Nero were key pieces in all three of coach Victor Brown’s years with the Vikings. Dale Clayton, Cole Thomas, Lee Zairen, Chris Nero and Matt Zielinski were some of the other seniors honored before Friday night’s game. The group helped turn the Vikings from a one-win team as sophomores to a district-playoff team a season ago and a district playoff contender once again this season.

“They deserved a win in their last game on this field,” Brown said. “I wish the result would have been different because they’re good kids and worked hard. They’re still playing hard. We’re going through a lot of adversity and for them to still have that demeanor and still be playing hard, I’m proud of them for that. That goes to show some of the growth that they made.”

PJP’s Kamal Gray (10) gets off a touchdown pass under the pressure of Upper Merion’s Justin Fisher. (Owen McCue – MediaNews Group)

Lobban’s punt return helped Upper Merion pull out a 24-21 win against PJP in 2016. The Golden Panthers won a 35-0 contest in 2017 before converting a two-point conversion with no time left to take down the Vikings, 22-21, last year.

PJP punter Dylan Walker pinned Upper Merion down at its own five-yard line Friday, trailing by a touchdown with 2:45 left in the game and no timeouts. After a two-yard completion and an intentional grounding penalty, Dale Clayton hit Anderson for a 35-yard completion to give the Vikings some life.

Unable to stop the clock, Upper Merion ran to the line and snapped the ball for another play. DiRico snuck in front of a receiver and intercepted Clayton’s pass to stop the comeback attempt in its tracks.

“I just saw the kid do a little hitch, and I tried to jump it and make a play,” DiRico said. “We were running around, and I just tried to make a play and it came through.”

NOTES >> While PJP will play for a league championship next week, Upper Merion will try to keep its season alive. The Vikings are currently ranked No. 14 in the District 1-5A power rankings and 16 teams make the district playoffs. Upper Merion defeated Owen J. Roberts in a PAC crossover matchup last season, another victory over a Liberty school next week would sure up the Vikings’ district hopes.