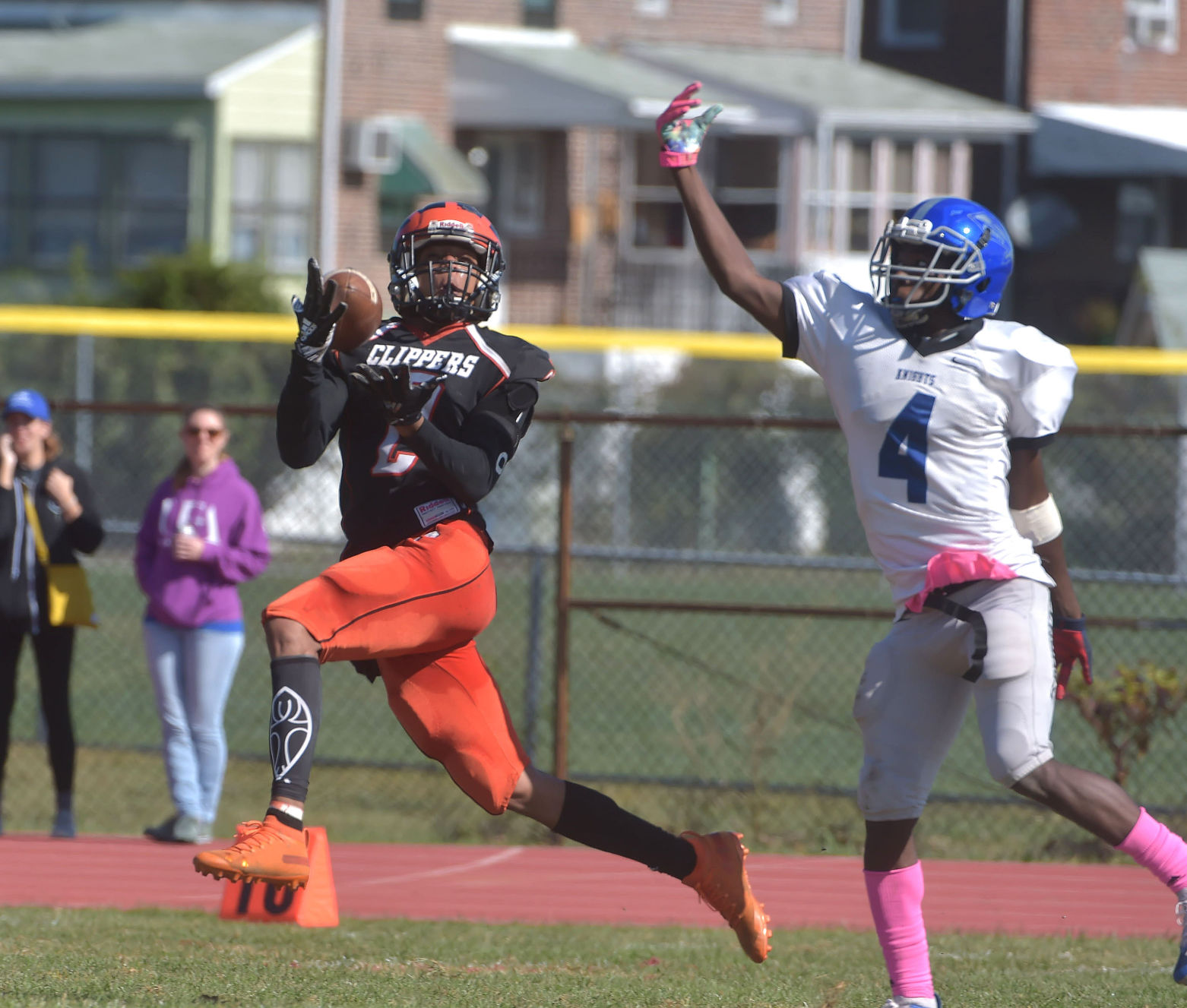 Chester's Malachi Langley, left, hauls in a pass from Dymiere Stevenson over Academy Park defender Nafees Fox for a score to get Chester within two points Saturday. Chester would rally for an 18-14 win. (Pete Bannan/MediaNews Group)

“I played for the last Clippers team that beat them,” Chester assistant coach Laquan Robinson said. “It was right here on this field.”

That field was the site of the dramatic end of the Clippers’ losing streak Saturday morning.

Chester sophomore Darron Miller returned a fumble 38 yards for a touchdown with 1:12 to play to spoil Academy Park’s hopes of clinching the league title outright with an improbable 18-14 come-from-behind victory over the Knights.

Ten years from now, those who played in the game or those who witnessed it will still be talking about all that transpired in the two hours and 48 minutes it took to complete the contest, which included seven turnovers and more than 175 yards in penalties marched off by umpire Rich Bush.

Public address announcer Dave Burman asked those in the crowd if they remembered the Eagles victory over the New York Giants in the “Miracle in the Meadowlands.” Future generations of Chester followers will listen intently as they are told about the “Miracle of Lamokin Street.”

Academy Park’s Skylar White had just shut down a pass from Chester quarterback Dymiere Stevenson to Hameen Carroll-Shaw at the line of scrimmage, leaving the Clippers (6-3 overall, 1-2 Del Val) five yards short of a first down with 1:20 to play as they turned the ball over on downs.

On the next snap, AP’s Barry Brown and Glister Threadgill III missed connections on a handoff, and the ball wound up in the hands of Miller, who took off and didn’t stop until he reached the end zone and was mobbed by delirious teammates.

“I rushed in from defensive end,” Miller said. “When (Threadgill III) didn’t have the ball, I saw it and I got it and I just kept running.”

That run could have been the one that will have the Chester players and coaches running practices the week the district playoffs begin, something that head coach LaDontay Bell has told this team could be its reward for its hard work and dedication. The Clippers are 20th in the latest Class 6A power rankings. The top 16 teams make the district playoffs.

“From the beginning it’s been all about having great expectations,” Bell said. “I expected the coaches to teach them at practice, during games, during timeouts. They did all of that today.

“The players have been energized, and I’m very excited about what all this means, especially for our seniors. This is the first group that I have coached when they were freshmen, sophomores, juniors, and now seniors. It’s a special win because it was such a team win.”

Academy Park’s Eric Willis breaks a tackle in route to a touchdown that put the Knights up 14-6 in the third quarter. (Pete Bannan/MediaNews Group)

On the other side of the field, it was a disappointing morning for coach Jason Vosheski and the Knights (7-2, 3-1), who have been ranked as high as No. 2 in a statewide poll of PIAA Class 5A teams.

“We gave the game away,” Vosheski said. “Our defense played well with the exception of that one long play they had. There might have been calls that we didn’t like or went against us. But so much of the damage that was done to us was self-inflicted.

“We have a nonleague game next week, then we’ll see if we’ll come back and be ready for the playoffs.”

Academy Park had a pair of three-and-out series and lost a fumble in its three possessions in the first quarter. A fumble recovery by Isaiah Powell-Gates set Chester up eight yards from the visitors’ goal line, and Stevenson’s fourth-down run delivered with the first points of the game 11 seconds before the quarter came to a close.

Academy Park answered when Brown faked a handoff and dashed straight up the middle for 79 yards 3:32 before halftime. Kabba Kamara’s kick set the score at the break at 7-6.

A Chester punt was downed at midfield midway through the third quarter. On the next snap, AP sophomore Eric Willis dashed 50 yards and Kamara made another kick to add to the Knights’ lead.

The Clippers got close in the fifth minute of the fourth quarter when Malachi Langley got past a defender and Stevenson hit him in stride. After the catch, Langley put the finishing touches on a 63-yard scoring play, but the two-point conversion pass was not successful.

“I wasn’t following through with my passes in the first half,” Stevenson said. “On the (touchdown) play, I rolled out and threw it deep and (Langley) caught it and did the rest.”

At that point, Miller began making his presence felt. He had a pair of tackles for losses near the Academy Park 20, which forced the Knights to punt. Chester was stopped, but then all the crowd noise seemed to stop when AP put the ball on the ground.

When the Chester faithful realized what was happening, the roar grew loud enough to be heard back at the high school building half a mile away.

“I ran one back like that for a touchdown in pee wee ball,” Miller said. “This is my first time scoring for the varsity.”

“We adjusted some things at halftime so that some of their plays wouldn’t hurt us,” Muhammad said. “We had a game plan for certain things, and our defensive coaches have taught us to see things and read things. I was fortunate that the ball came to me.”

For the Clippers, it was the happiest way for the “Miracle of Lamokin Street” to end.