All the numbers go Springfield’s way 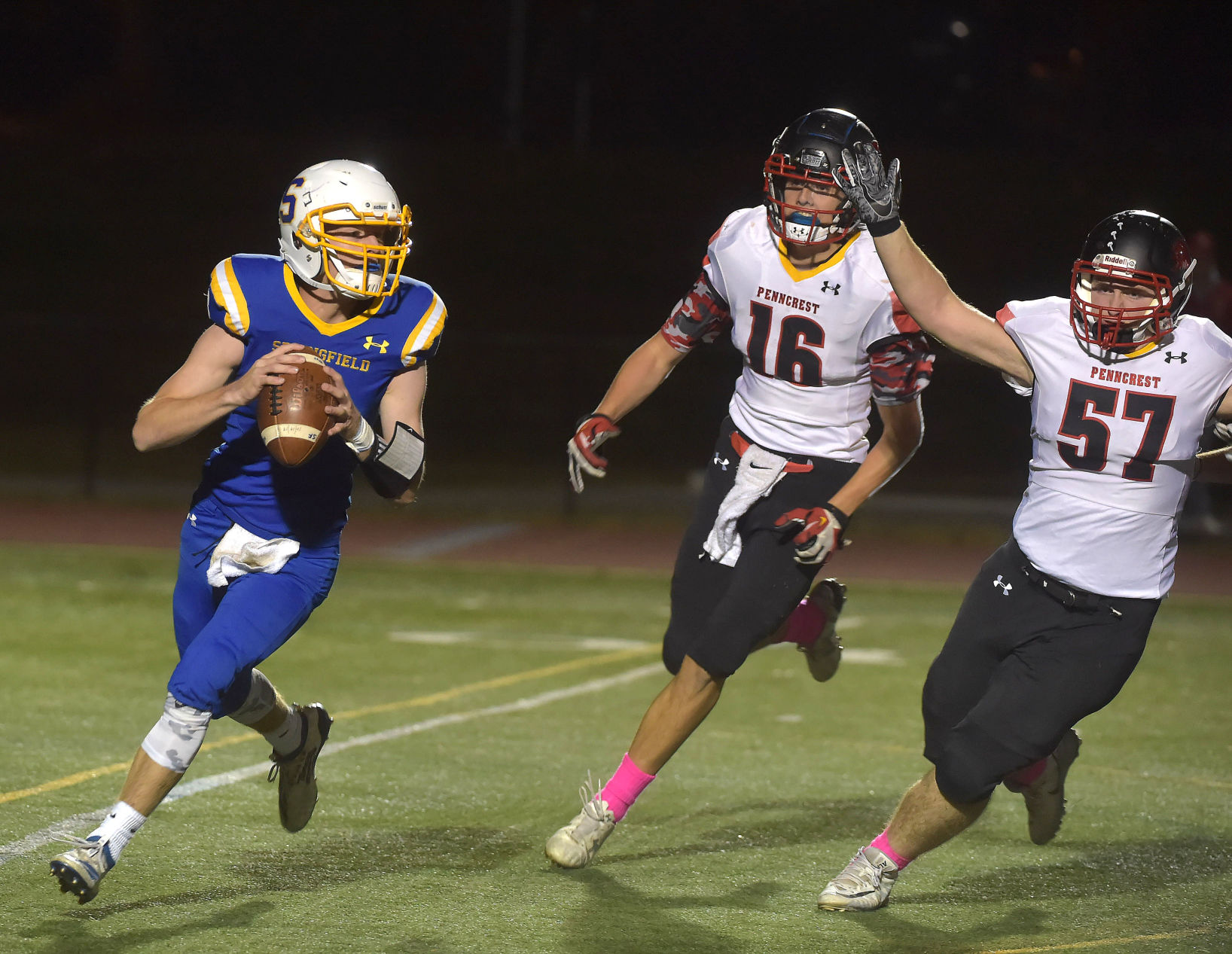 NETHER PROVIDENCE — The numbers on the statistics sheets leaned heavily in favor of Springfield.

The numbers on the scoreboard weren’t so convincing until Penncrest fumbled away a two-point conversion try with 1:10 remaining in the game to lift the Cougars to a 20-19 Central League decision over the Lions at Strath Haven’s George L. King Field Friday night.

A pair of fumbles by the Cougars (3-6 overall, 3-5 Central League) in the last six minutes kept the Lions’ hopes alive. Backup quarterback Nick Chelo completed an 18-yard pass to David Cage on a fourth-down play, placing the ball less than a foot from the goal line. Brennan Kaut (20 carries, 67 yards) got a touchdown on the next snap, leaving Penncrest one point behind. Lions coach Ryan Smith decided to go for a two-point conversion, but the play never got off the ground after the ball ended up on the ground.

“It’s a decision I’d make again,” Smith said. “I could have put them in a better position to make a play there.”

Brian Loeper had recovered a Springfield fumble five minutes earlier, but the Lions got no closer than the Springfield 23.

When the Cougars put the ball on the ground again, it was Jerry Collins claiming it for the Lions with 3:25 to play. Penncrest took five plays to get into the end zone, and Springfield used one key defensive play to keep the game from being tied.

The teams broke for halftime tied at 13 after a scoreless first quarter. Vince Divario put the finishing touches on an 11-play drive that covered 58 yards for Springfield’s first score, but the conversion kick was blocked.

Kam Vaughan, who had scored on a 90-yard kickoff return against Radnor four weeks ago, took the Cougars’ kickoff 91 yards, and Kevin Mills booted the extra point that gave Penncrest (2-7, 1-7) the lead three minutes into the second quarter.

Springfield’s next drive ended when Austin Hines picked off a Matt Ellison pass in the Cougars’ backfield and dashed 55 yards for a touchdown.

Six plays later, Springfield got even on a 63-yard march that included a 15-yard completion from Ellison to Rob Longo, Jack Clark’s 22-yard run, and a 20-yard play from Ellison to Tom Dougherty before Ellison ran the final three yards.

Brett Barber’s kick made the halftime score 13-13. At the half, Penncrest, which lost starting quarterback Jimmy Cage to an injury in the opening quarter, had 14 yards of total offense, no pass completions, and no first downs.

On the third play of the second half, Springfield junior Brett Gougler picked off Chelo at the Penncrest 31. A third-down interference call kept Springfield moving, and Ellison added his second scoring run and Barber kicked another extra point.

“I saw their kid and I made a play on the ball,” Gougler, whose other interception this season came against Haverford four weeks ago, said. “Our defense played well in this game, and it was a fun experience. But we’ve still got some things to work on.”

Penncrest’s (24) Kam Vaughn returns a kickoff for a touchdown in the second quarter against Springfield. (PETE BANNAN/MEDIANEWS GROUP)

Penncrest’s Smith had his players working on doing what was necessary to spring an upset.

“They competed,” he said. “They embraced the game plan and the defense gave us a chance (late in the game).”

Springfield’s only first down in the last quarter came on a penalty. Aidan Shandley broke up a Penncrest pass on the Lions’ last drive just before Chelo’s big connection with Cage.

Penncrest’s Smith wished he and his players could have taken a victory with them on their bus ride back to school.