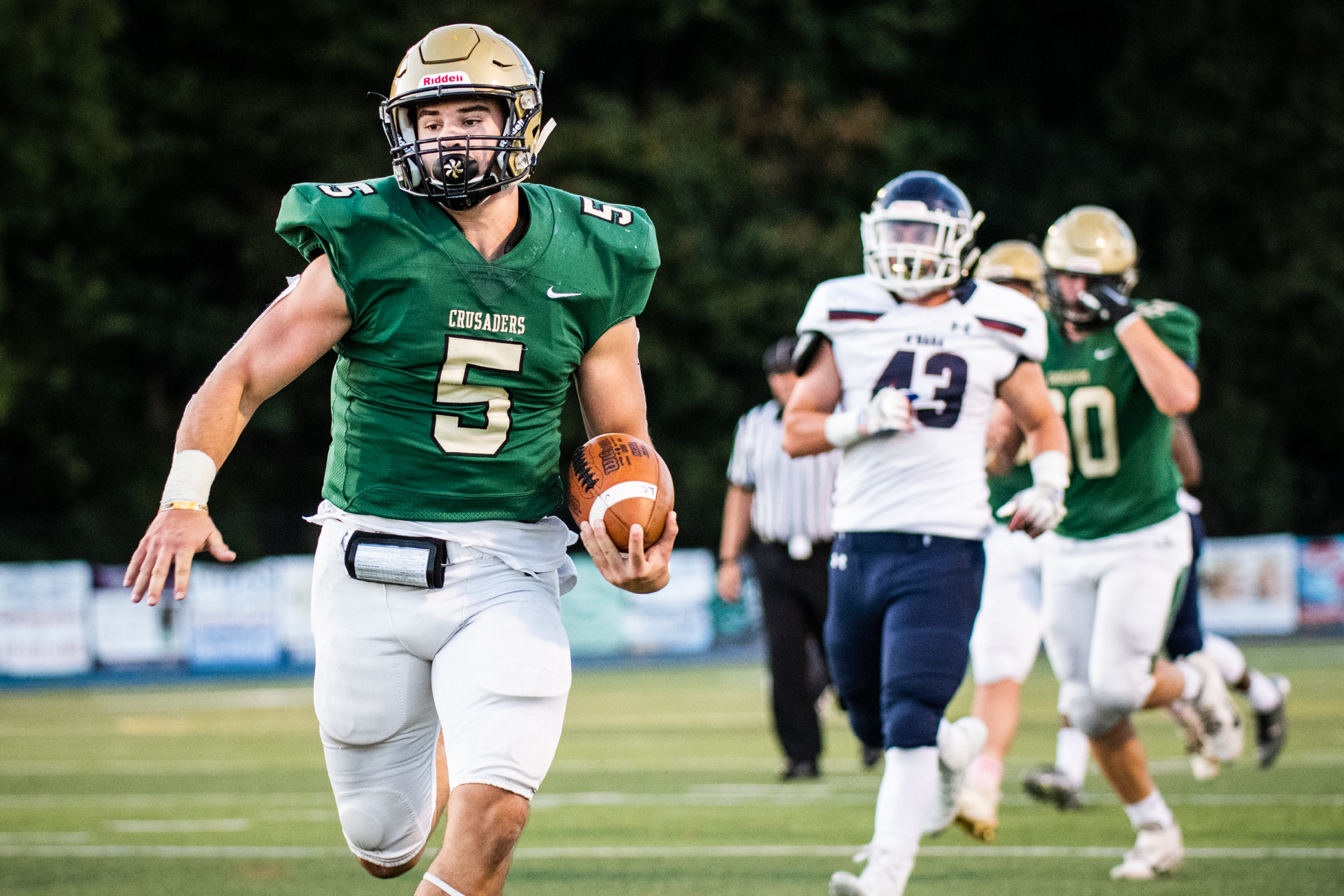 Danny Dutkiewicz (5) breaks away for a long touchdown run to put the Crusaders up by two touchdowns over Cardinal O'Hara Saturday night. (James Beaver/For MediaNews Group)

“We needed it,” said Dutkiewicz, who carried the ball 16 times for 133 yards, scoring both touchdowns for LC. “After two losses, we had to get back into it.”

The Crusaders went up over the .500 mark, improving to 4-3 overall with a 2-2 mark in the Philadelphia Catholic League Blue Division. O’Hara dropped to 1-5 overall and 0-4 in the PCL Blue.

Lansdale Catholic scored the first time it had the ball.

Lansdale Catholic’s Evan Hannings (3) stretches out for a first down against Cardinal O’Hara during their game Saturday, Oct. 5, 2019. (James Beaver/For MediaNews Group)

Dutkiewicz gained 12 yards on three carries, giving LC a 1st-and-10 at its 39. Quarterback L.J. Phillips then scrambled for seven to move the ball to the 46.

On 2nd-and-3, Dutkiewicz took the handoff, followed a block, made a cut and was gone, speeding away to a 54-yard touchdown run that quickly put the Crusaders in front, 7-0, less than three minutes into the contest.

“It felt great for the team, to give us momentum,” Dutkiewicz said of the early score.

LC’s defense allowed just a single first down in the opening quarter, and its offense nearly scored again on its second possession, but ultimately turned it over on downs at the O’Hara 32.

The Lions could manage little offense in the early going but looked to be in business when Brandon Schumm intercepted Phillips and returned the ball 29 yards, down to the LC 11.

Lansdale Catholic’s Kevin Gianoni (52) knocks down Jalen Ray’s (12) pass attempt to close out the first half during their game on Saturday, Oct. 5, 2019. (James Beaver/For MediaNews Group)

However, the Crusader defense stiffened again, forcing O’Hara into a 4th-and-2 at the three-yard-line.

On the fourth-down play, Jalen Ray was under heavy pressure as he rolled right, and his pass for the end zone was knocked down by Shane Stewart, preserving LC’s 7-0 lead at the break.

“(If you score there), you go into halftime 7-7,” Lions coach B.J. Hogan said. “You wish he could have somehow scored on the (interception return), but you have four plays from 11 yards out, you gotta find a way to get it in. Great football teams punch that in. At some point, we gotta execute and make plays.”

O’Hara’s defense hung in but the offense was stymied: its second-quarter possessions ended with a turnover (Evan Hannings interception), two punts and the turnover on downs.

“I thought the kids came out and battled,” Hogan said. “Offensively, it’s embarrassing not to get points. You have a lot of guys banged up but the other guys gotta step up and make plays.”

Kevin Gianoni and Jack Kelly each had sacks for the Crusaders, who didn’t allow O’Hara a single completed pass and held the visitors to 31 yards rushing on a cool day on the turf at Wissahickon.

The Crusaders doubled their advantage in the third quarter, when a 37-yard, weaving run by Dutkiewicz reached the end zone for a 14-0 lead.

Dutkiewicz also added a 13-yard reception for the Crusaders.

“He gets us going,” LC coach Dominic D’Addona said. “He’s the bulk of the running game. They key on him and we just try to find ways to get him the ball.