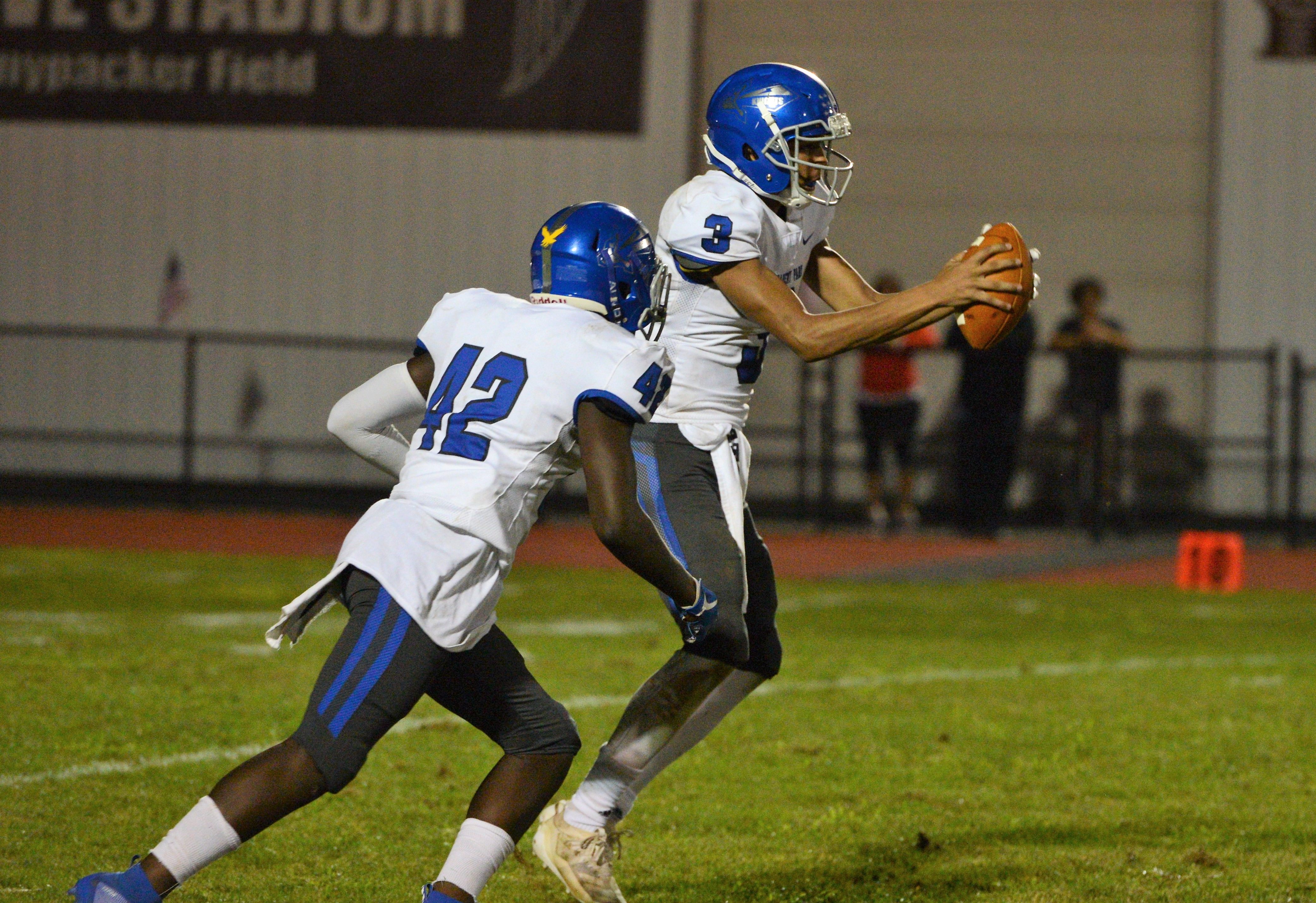 SHARON HILL – Academy Park quarterback Barry Brown has been playing the position since he was 13. Just not for the Knights.

This year, however, they really didn’t have anybody else who could do the job. So, here’s Brown, behind center. And here’s Academy Park off to a 6-1 start. Friday, he totaled 379 yards and six touchdowns. AP used that to cruise to a 47-21 victory over Interboro.

“Honestly, I’m really a receiver,” Brown said, although on this night he looked very much like a seasoned quarterback.

Brown sent his team to a 2-0 record in Del Val League action with big play after big play. The 6-foot-2 senior rushed for 179 yards and three scores. He passed for 200 yards and another three touchdowns. All but one of those came on chunk plays of more than 20 yards.

That helped the Knights race out to a 28-0 lead. Interboro (0-7, 0-1) hung around after that, but the damage was done. With top back Devon Covert injured mid-game, Brown was the focal point of the Academy Park offense. He shined.

“It’s nice having a quarterback that is a dual threat, especially with the offense we run,” Knights coach Jason Vosheski said. “I don’t know if it was the home game – we haven’t been home for a while – if it was homecoming, or what, but the offensive guys, all of them, everyone that was out there, they got together and played a terrific, terrific game. Kind of helps Barry get his yards.”

Brown delegated praise as a quarterback is supposed to do. The Knights have talent and it is never one guy, even when one guy has this kind of game.

“It does start with our o-line,” Brown said. “As it went through there, our running backs and receivers. We got speed, we trust everything we got.”

Brown bookended that 28-0 spurt with a 34-yard pass to Alphonso Hayes and a 51-yard pass to Malik Johnson. He sandwiched those scores with runs of four and 54 yards. In the second half, Brown found Hayes again (23 yards) and hit another big run (55 yards) to add to the damage.

Hykeem Green’s eight-yard run in the third quarter were the lone non-Brown points for AP. It was fitting. The Knights are not scheduled to be on this field again, though a home playoff game is likely. The crowd was big and they wanted a show. Brown gave them one.

“As this being our last senior home game on the field as seniors, we should take it,” he said. “Go out with a bang. And we won it all.”

Brown’s exploits more than accounted for a little bit of an off night for AP’s normally stingy defense. Interboro had 226 yards of offense and moved the ball behind the shifty Isiah Fusaro and a few big plays.

“Their offense is difficult to defend, depending on your personnel,” Vosheski said. “The last points we had some younger guys in, a mixture of guys. But we got big-played at times. It wasn’t like constantly. … They did a decent job.”

Mike Zane’s 45-yard pass to Fusaro late in the first half got Interboro on the board. Zane hit Jeremiah Butts from 17 yards out and Fusaro found Mike Wittorf from 29 yards away during the fourth quarter. It wasn’t enough.

However, for Interboro, it represented something. The Bucs are in uncharted territory without a win this late in the season. Longtime coach Steve Lennox is pleased with the fact that, despite these results, his team continues to grind.

“Proud of the way the kids kept fighting,” Lennox said. “They stayed together.”

Covert had 30 yards on five carries before departing. Vosheski will know more about his status this weekend. His removal from this game was more precautionary than anything.