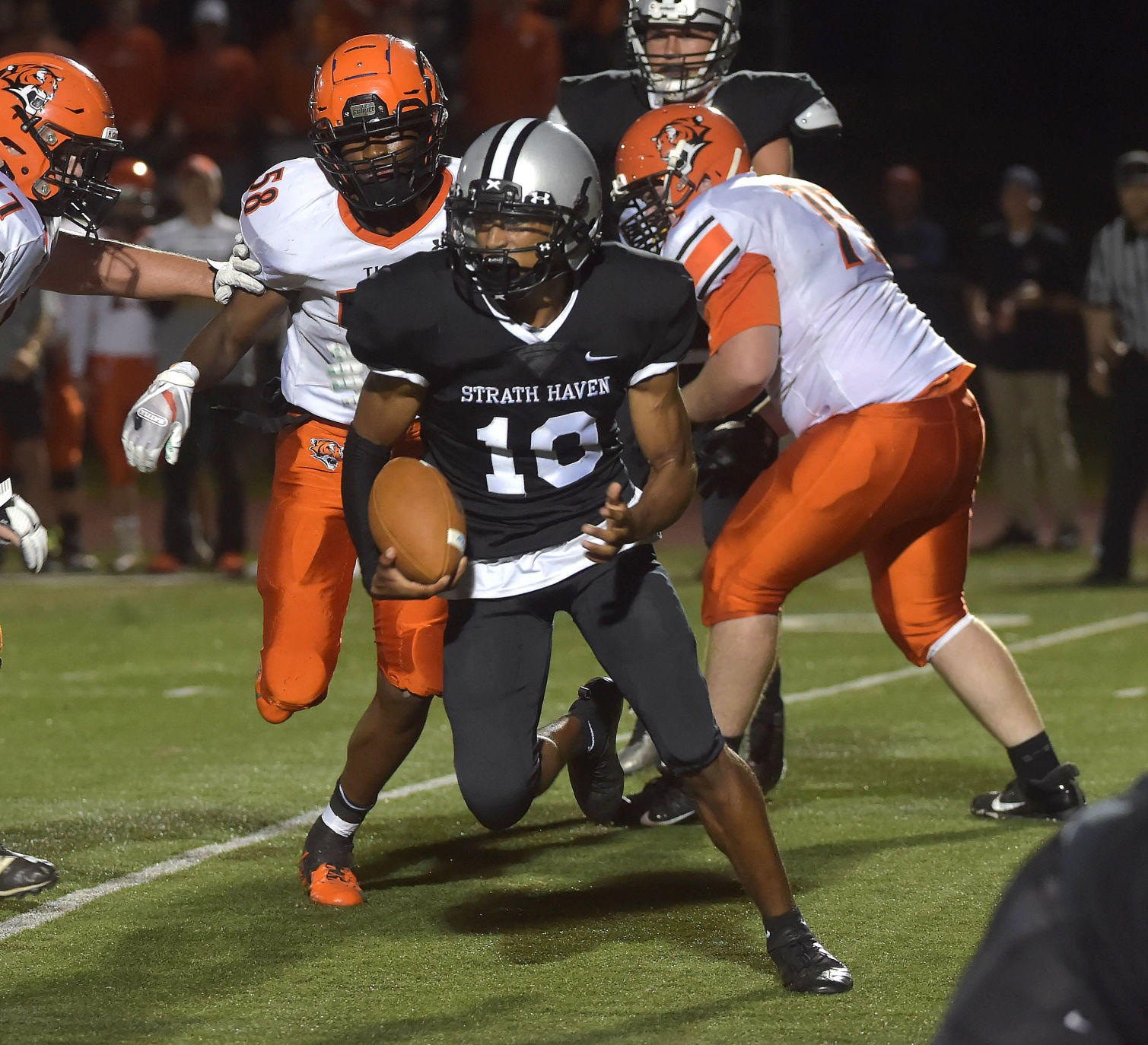 NETHER PROVIDENCE — Strath Haven was mired in its sixth consecutive quarter without a touchdown when Ibo Pio lined up to receive a punt Friday night.

The running back had gashed defenses for the first three weeks of the season, then found running room scarce as the Central League season rose up to meet the Panthers. With neither Haven nor visiting Marple Newtown doing much offensively, Pio needed just one sliver of space to get his team going.

“That’s big energy right there,” linebacker Christian Mazur said of what would transpire next.

Pio returned a second quarter punt 37 yards, and after a Marple late hit, Haven had the ball at the 12. It set up a 28-yard field goal for Emmet Young that ended up being enough for the Haven defense in a 10-0 win to knock the Tigers from the ranks of the unbeaten.

Pio also scored the game’s only touchdown, a nine-yard jet sweep on the first drive of the third quarter. But the game pivoted on the punt return.

“I see it as getting good yardage for our team, for our offense,” Pio said. “It was a dogfight all night on offense just to get first downs. So punt returns are a big deal, and me seeing an alley like that and taking advantage of an opportunity and not wasting it, that’s big. It was a momentum changer for us.”

Strath Haven’s Emmett Young kicks a go-ahead field goal in the second quarter Friday night, and it stood up in what became a 10-0 win over Marple Newtown. (Pete Bannan/Digital First Media)

“We haven’t had a big play like that in a while,” running back John Prochniak said. “It gave us that boost that we needed. We didn’t score a touchdown like we wanted, but we got three points on the board, which is what we needed to get.”

It came in a half when the Panthers (5-1, 4-1) struggled mightily to move the ball. They had just 14 offensive snaps and coughed up two fumbles in the first 24 minutes, collecting a grand total of 35 yards, all on the ground, and two first downs.

But Pio’s punt return and Young’s boot were enough for a halftime — and a sizeable psychological — edge.

Strath Haven set things right in the first drive of the second half, again set up by a big return, Jaris Adams taking the kickoff 29 yards to near midfield. Haven nearly doubled its offensive output from the first half with 62 yards and five first downs, Pio sweeping off left tackle for the scoring run on the 11th play of the march.

That would be plenty for the Haven defense, which did in the second half what Marple’s unit did in the first. Until the last four snaps of the game, Marple Newtown had just 29 yards of offense in nearly two quarters. Only three (largely inconsequential) completions between Joey Paoletti and Charlie Box for 39 yards in the final series padded the stats.

For the day, the Tigers (5-1, 4-1) tallied 165 yards of offense. Their dangerous sophomore back Box was boxed in for 70 yards on 16 carries. He had just three touches in the second half before that last futile series.

Paoletti scuffled, going 10-for-23 through the air for a paltry 76 yards. He was sacked four times, 1.5 of them going to Aiden Prochniak, and John Prochniak picked off Paoletti in the first quarter when Marple got to the 24. It proved to be the second-deepest progress for the Tigers on the day; the other was a second-quarter field-goal attempt that Jimmy O’Brien pulled wide left.

“Defensively, we wanted our ends to contain the quarterback because we know he can extend plays all the time,” said Mazur, who had a sack and a pass deflection. “That was the main goal, to contain and keep him in the pocket. … Anytime you can make a quarterback uncomfortable in a game, it’s going to be hard for him to win and stay confident and consistent.”

Haven found its running groove in the second half. Jack Ryder didn’t complete a pass, but the Panthers ran for 209 yards on 43 carries. John Prochniak provided 117 yards on 22 carries, though he did fumble twice. The inside trap play to Prochniak was one the Tigers never came to terms with.

What a pick by John Prochniak! Slips under the route and picks it Haven ball at its 30. pic.twitter.com/ZLL0JFQ5e0

“It’s great because if you’re doing the same play over and over again and they can’t stop it, what are you going to do?” Prochniak said. “You just keep getting yards, so that was it for that.”

Christian Aquila recovered two fumbles for Marple. The other came when Cain Tarquini ripped the ball out of John Prochniak’s hands.

“We played hard,” Aquila said. “We trust our offense. You get a turnover, hope our offense makes something happen, sometimes they don’t. Usually they do, though. … We’re confident in our defense. We let up one touchdown, they had a big punt return, that’s it.”

For Strath Haven, Friday was a chance to right the ship after last week’s 24-0 loss to Haverford. Against a team it could meet in the District 1 Class 5A playoffs, the win also provides a big momentum boost … like Pio’s punt return, but writ large for the season.

“We knew this was going to be a big game,” Mazur said. “This was an undefeated team in our league. We knew if we could beat them, we’re going to have good things in the playoffs.”

Kingsborough a chip off the old block for Ridley
Mercury Roundup Sept. 27