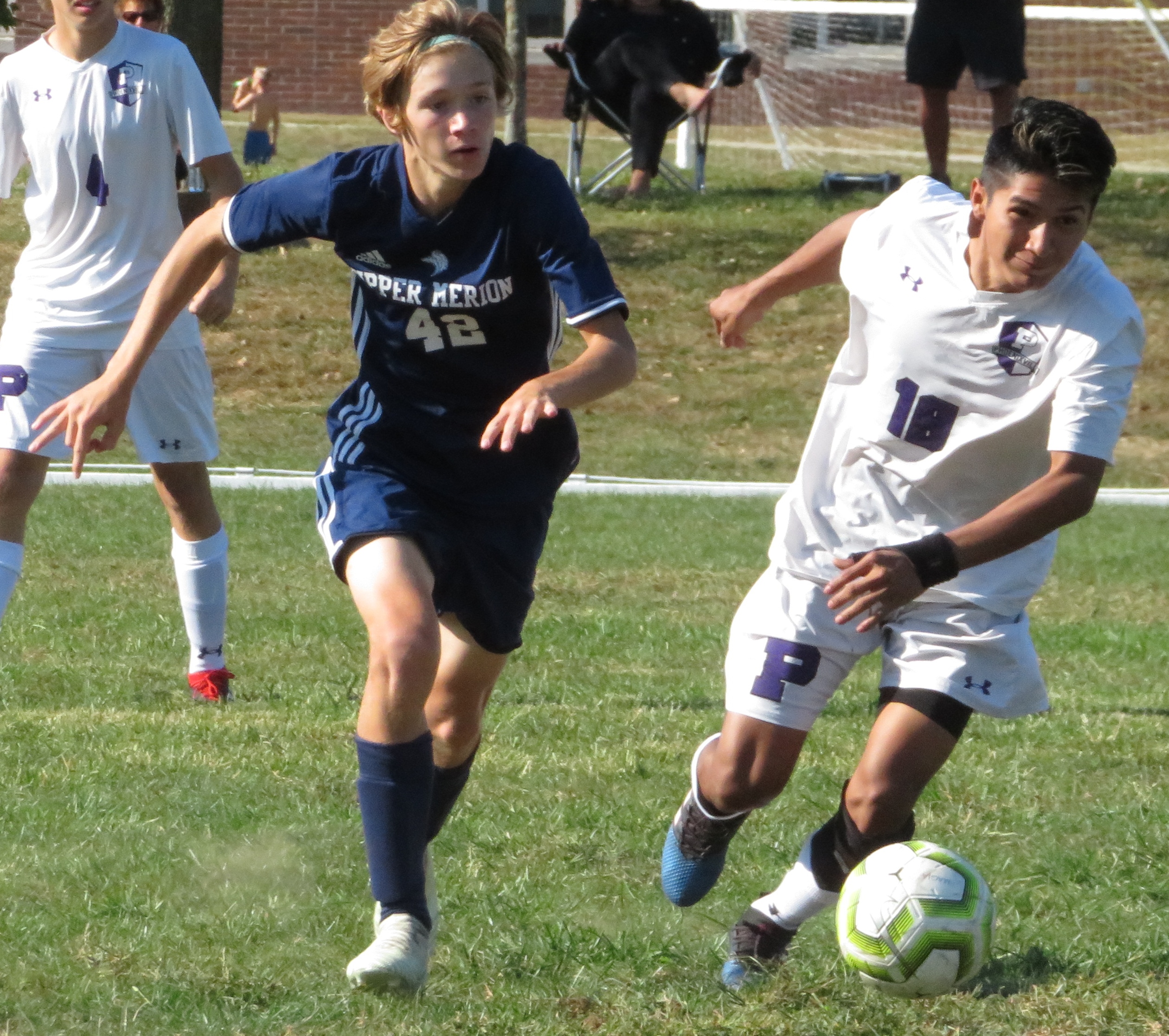 “That’s usually an everyday thing,” Phantoms captain Clay Kopko said. “We set aside at least 15 to 20 minutes to work on set pieces, whether it’s free kicks, corner kicks, longer kicks. That’s something we work on a lot.”

Midfielder Mitchell Pechacek scored the first goal halfway through the first half. The junior took a free kick from 25 yards out, keeping his shot low to the ground and finding the back of the net on the right side.

Kopko made it 2-0 less than five minutes after halftime. After a foul was called inside Upper Merion’s box, the senior midfielder stepped up and scored the penalty kick.

“I’ve already made one PK on the season,” Kopko said. “I just have enough confidence in myself to know that I can step up and take shots when we need them. I felt like that was a big turning point in the game. After that it put us up by two goals, lowered their morale a little bit.”

The match turned chippy after the penalty kick, which Upper Merion didn’t agree with. The Vikings received a yellow card for arguing the call and two more yellows later on.

“Our defender definitely was first and got kicked,” Upper Merion coach Phil David said. “I think the ref saw some sort of collision and called somewhat of a phantom penalty kick. In soccer, especially in a tight game, that really makes the difference. Sometimes it bounces your way – we beat Souderton 1-0 on Saturday and we had that bounce at the end and here we didn’t. Phoenixville is a good enough team to park the bus a little bit and I think that was the difference in the game.”

“I have to settle down everybody,” Kopko said of when the game gets chippy. “We do have a few kids who like to go at other kids. I have to settle them down and we have to play our game no matter what happens. If we get a foul called on us, just get back on defense. We can’t get into talking to the refs and stuff and then us getting in trouble.”

Aside from the free kick and the penalty kick, the Vikings played solid defense, allowing just one other shot on goal.

“Our strength is in the back,” David said. “A lot of experience, a lot of speed, a lot of solid play. That’s really what has given us success this year.”

Offensively, they put eight shots on goal, but Phoenixville keeper Gavin Perillo turned them all away.

“We weren’t clinical,” David said. “We’ve scored a lot of goals this year and I’ve been proud of that. I think if we put that breakaway away in the beginning of the game we’re having a different conversation now. At the end of the day, if you don’t finish you’re not going to have success. That was disappointing but I’m positive and I think we’ll really finish the year strong.”

“This was our make or break game for our season,” Kopko said. “That’s what coach (Michael Cesarski) has been saying to us all week. This really decided if we continue moving up for districts or not. That’s our goal – make districts, make a run in districts. This helped us a lot today.”