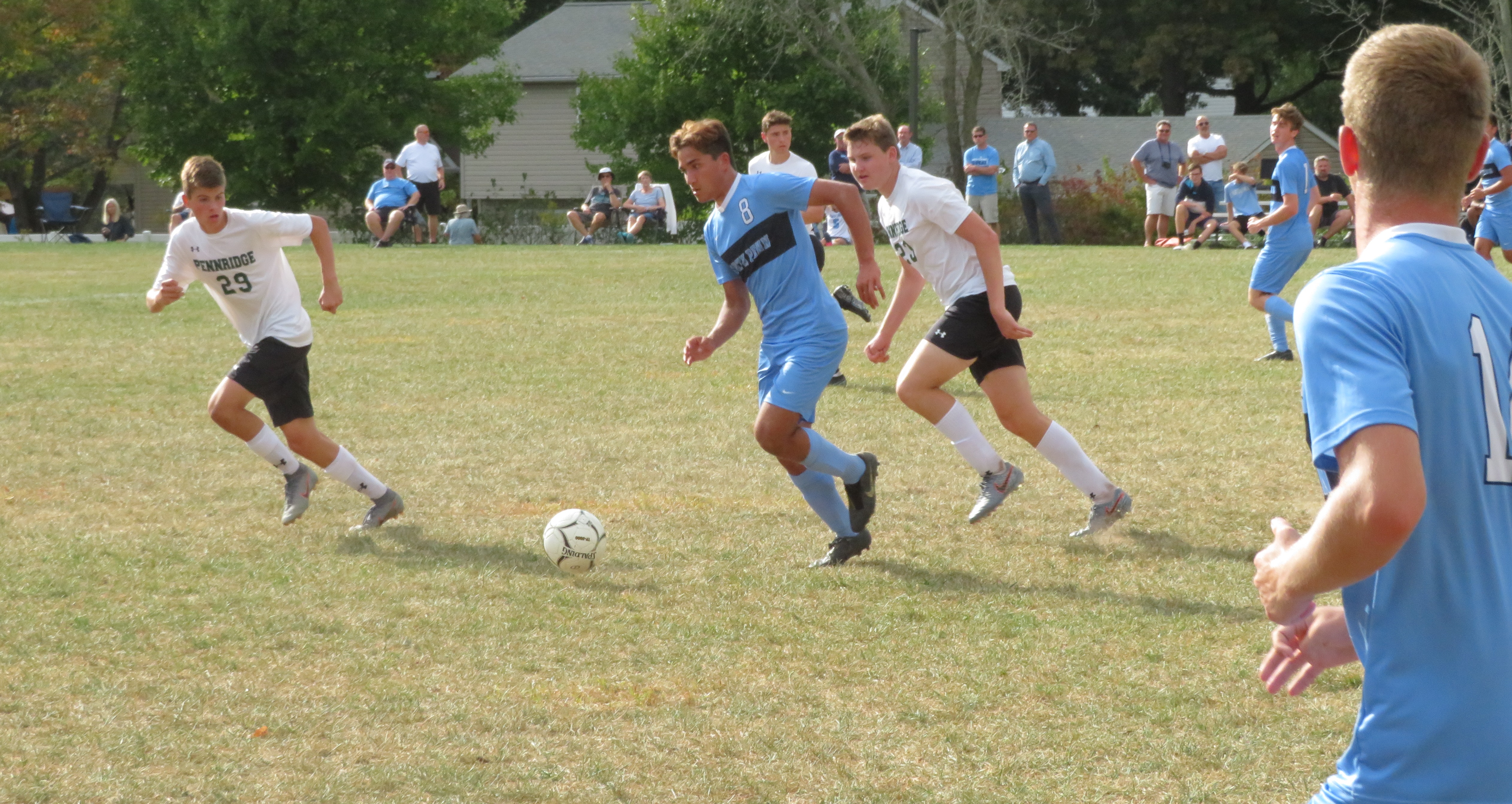 TOWAMENCIN >> Josh Jones is hard to miss on a soccer field.

The North Penn junior towers at 6-foot-5 in the middle of the park, a ball-winner on defense and a target man on offensive set pieces. Jones has featured in the Knights lineup since his freshman season but his impact has only grown with each passing fall.

Jones is hard to miss and Jamie Stewart didn’t miss him as Jones’ thumped header provided the winning margin as the Knights edged the Rams 2-0 Tuesday afternoon.

“I know I’m the target on almost every one of those, so they just look for me,” Jones said. “The biggest thing in high school is you don’t have that much time, so you have to learn to play quicker and it’s a lot more physical in the midfield.”

North Penn (8-1-0, 4-1-0 SOL Continental) started out off-kilter, with the Knights trying to jam the ball in and not connecting well under Pennridge’s pressure. It also led to leading scorer Carter Houlihan getting isolated so the chances didn’t come fluidly.

Pennridge (6-3-1, 2-3-1) tried to employ its speed up top, which had the Knights defenders paying attention. The Rams were also resolute in the midfield, getting after the ball anytime it found a Knights player.

“The scouting report is pretty simple, Josh Jones and Carter Houlihan and both of their guys stepped up,” Rams coach Pete Valimont said. “We had a game plan, stuck to it and in the first half, credit to my guys for doing what we told them to do. A set piece beat us in the first half but that was it.”

It would be a throw-in of all things that changed the Knights’ fortunes. North Penn won a throw deep on the right flank with Stewart retreating into a row of onlookers to heave it in.
Stewart’s throw sailed right to the middle of the box, where Jones skied above the crowd and nodded it home with about nine minutes to play in the first half.

“Most of the teams around here, it’s a skill you learn in high school soccer if there’s nothing else to do, throw it long and hope the big man gets onto it,” Stewart said. “They were playing five in the back, which was new for us because it’s not that common in high school soccer so we had to focus on one and two-touch in the midfield and getting it through to our three up top who have done so much for us this year.”

North Penn sought more after the break, with Mike Chaffee forcing keeper CJ Dimmick into a quality save early.
Pennridge dropped to its usual formation after the half, needing the numbers up higher to chase an equalizer.
The Rams got a terrific look when speedster Aidan Castle slipped in behind the back line. A bounce betrayed the forward, who put his shot over the crossbar.

“We had a bad bounce and missed but I don’t think the score is going to give it justice of what type of game it was,” Valimont said. “We end the season with them so it’ll be a nice way to end the regular season having them come to our place.”

Houlihan got himself more involved after halftime, although Pennridge had him well-marked all over. The senior finally broke free about midway through the second half on a strong solo effort.

Houlihan was able to beat a couple defenders off the left side and along the touchline before getting his first shot denied by Dimmick. The rebound was too quick to clear and Houlihan slammed it home for the second goal.
While their contributions didn’t show up in the stat sheet, the Knights got plenty of other hard-working efforts.

“Our ability to go deep in the bench has surprised me a little,” Stewart said. “We came into the season with six solid players and those other players have been rotating in and really stepped up for us.”

During preseason, Jones had the opportunity as one of 32 players selected by Adidas to travel to Spain for a nine-day training trip to Real Madrid. While the junior very much enjoyed the experience, he apologized to his coaches for missing some practices and has been trying to make it up on the field.

Jones almost had a second goal off a header, but Dimmick made a nice save at the far post to deny him. The midfielder felt the challenges the Rams presented will make the Knights a better side moving forward.

“We learned that teams are going to try multiple things to throw us off but but we have to keep playing our game and stick to what we know works best,” Jones said.