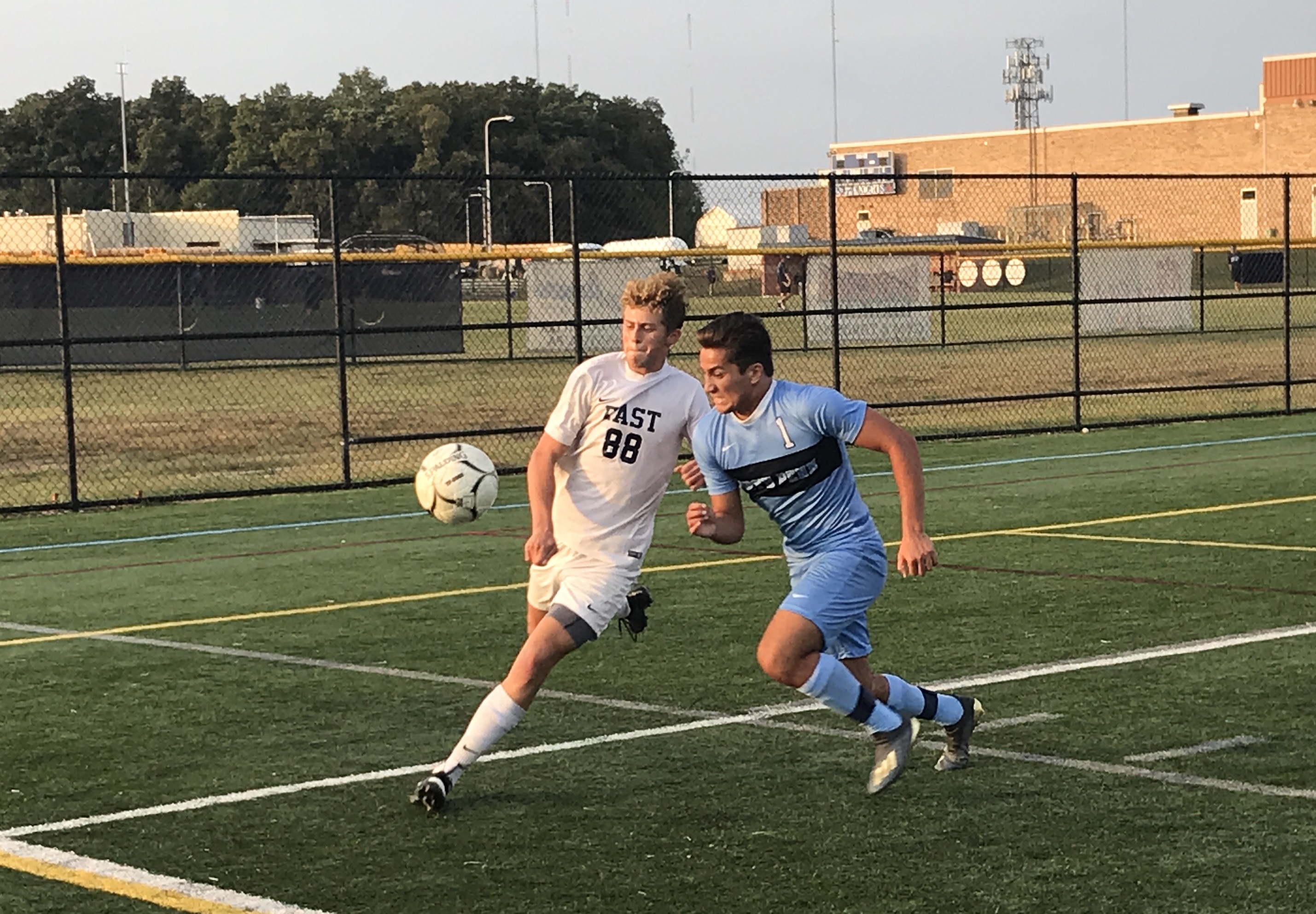 TOWAMENCIN >> Maybe on another night, one or maybe a few more of the numerous scoring chances the North Penn boys soccer team created would have found their way into the net.

Tuesday was one of those nights luck — given a hefty assist by the defensive effort of Central Bucks East — was just not the Knights’ side. And in overtime, the visiting Patriots took advantage.

Brandon Epstein kept a ball alive near the end line and sent a cross that connected with Michael Ferrante, who put in his own rebound at 5:45 in the extra period as East edged the Knights 1-0 for another statement SOL Continental Conference win.

“It’s a tough game when you’re playing a low-scoring game like soccer and you just got to hold in and maybe get a couple lucky breaks and then get one that goes your way,” CB East coach Josh Isaacson said. “But I’m really proud of the boys, they saw it through and I lot of our conditioning and fitness and stuff really shows when it’s real late in the game.”

BOYS #SOCCER: Final 5:45 OT @cbeWeThePeople 1, North Penn 0. Michael Ferrante with the OT winner, knocking in a shot after his first try is saved. Brandon Epstein with the assist. pic.twitter.com/evZKNQnLWY

North Penn (3-1-0, 1-1-0 conference) controlled play for the most of the contest and after halftime pushed constantly for the opening goal. CB East (3-1-0, 2-1-0), however, survived the relentless pressure — including a free kick just from outside the 18-yard box in the last minute of regulation – to post its first shutout of 2019.

“It was that kind of game, that kind of night,” Duddy said. “Normally, we get that many chances we’re going to score a couple goals. But credit to them defensively they played very smart and well.”

In overtime, the Patriots started to gain some offensive footing and struck for the winner off a throw-in. Epstein tracked down the throw before it went over the end line, delivered a cross into the box that took a bounce before finding Ferrante driving to the far left post.

Ferrante’s initial shot was blocked by NP goalie Sawyer Meade, but the deflection came right back to Ferrante, who knocked it up and into the top of the net.

“Saw our center mid Brandon going for the ball, their defense thought it was going out,” Ferrante said. “Brandon crossed it in and I kept following. I hit it once, the goalie saved it and I put it in.”

For CB East, the goal not only allowed it to bounce back from its first loss (2-0 last Friday to Central Bucks East) but to also show that the Patriots can be contenders in the Continental after last season posting only five wins and missing the District 1 playoffs.

“It’s a really good win cause not a good season last year but this year now we’re starting to get more wins,” Ferrante said. “This is a very good team that we played against, very important that we won this game.”

East has not won the conference since 2015 when it went undefeated in claiming the PIAA 3A title but so far has already claimed wins over both of last year’s Continental co-champs North Penn and Central Bucks West — edging the Bucks 2-1 on a goal with a minute left last Wednesday.

“The bottom line is they didn’t give up,” Isaacson said. “That’s something that we have absolutely preached is every single second you’re in there, you got at it. And the goal against West at the end and this goal were just hard-fought goals and that’s why we’re so proud.”

“You’re not going to get through this conference undefeated,” Duddy said. “There’s going to be some times, it looks like a year where some points are going to be lost if you will. So maybe to a certain extent it’s good to get knocked down a couple pegs early.”

Carter Houlihan had the best scoring chances in the run of play for North Penn while the Knights had a handful of free kicks from dangerous spots.

In the first half on a free kick from about 24 yards out, Ryan Stewart first shot was blocked by the East wall, but the rebound came back to Stewart, who proceeded to blast a ball off the left post.

Houlihan got some space in the box later in the half to let off a shot that went over the cross bar. Houlihan put another shot on goal before the half, but his volley from just outside the box was right at East keeper Tyler Okin.

The Knights earned a free kick early in the second half from around 22 yards out but James Stewart’s try was sent wide right.

“We’ve been pretty good on our set pieces so far this year but not tonight,” Duddy said. “We hit a few balls way too deep that should’ve been either to target or at least, around 12, in front of the goal just to have a shot at it. But, yeah, it wasn’t our best game.”

Houlihan got behind the East backline on a throw-in, but his shot after a cutback was kick-saved by Okin with the rebound staying under the Patriot keeper.  The NP senior midfielder almost found that opening strike when he again got free behind the East defense only to put his shot wide left into the outside netting of the goal.

“Honestly, just solid defense and kind of forcing them to play the ball,” said Isaacson of keeping the Knights scoreless. “And kind of trying to keep them outside with some shots and sometimes you get a little lucky and Carter Houlihan’s not as on as he usually is.”

A Ryan Stewart free kick was headed towards goal by Josh Jones but Okin reached up to make the save. Houlihan facilitated another chance, sliding a pass to James Stewart, who ripped a shot from outside the box wide left.

In the final minute of regulation, the Knights were awarded a free kick above the 18-yard box but Ryan Stewart’s one-hopper on frame was scooped up by Okin.