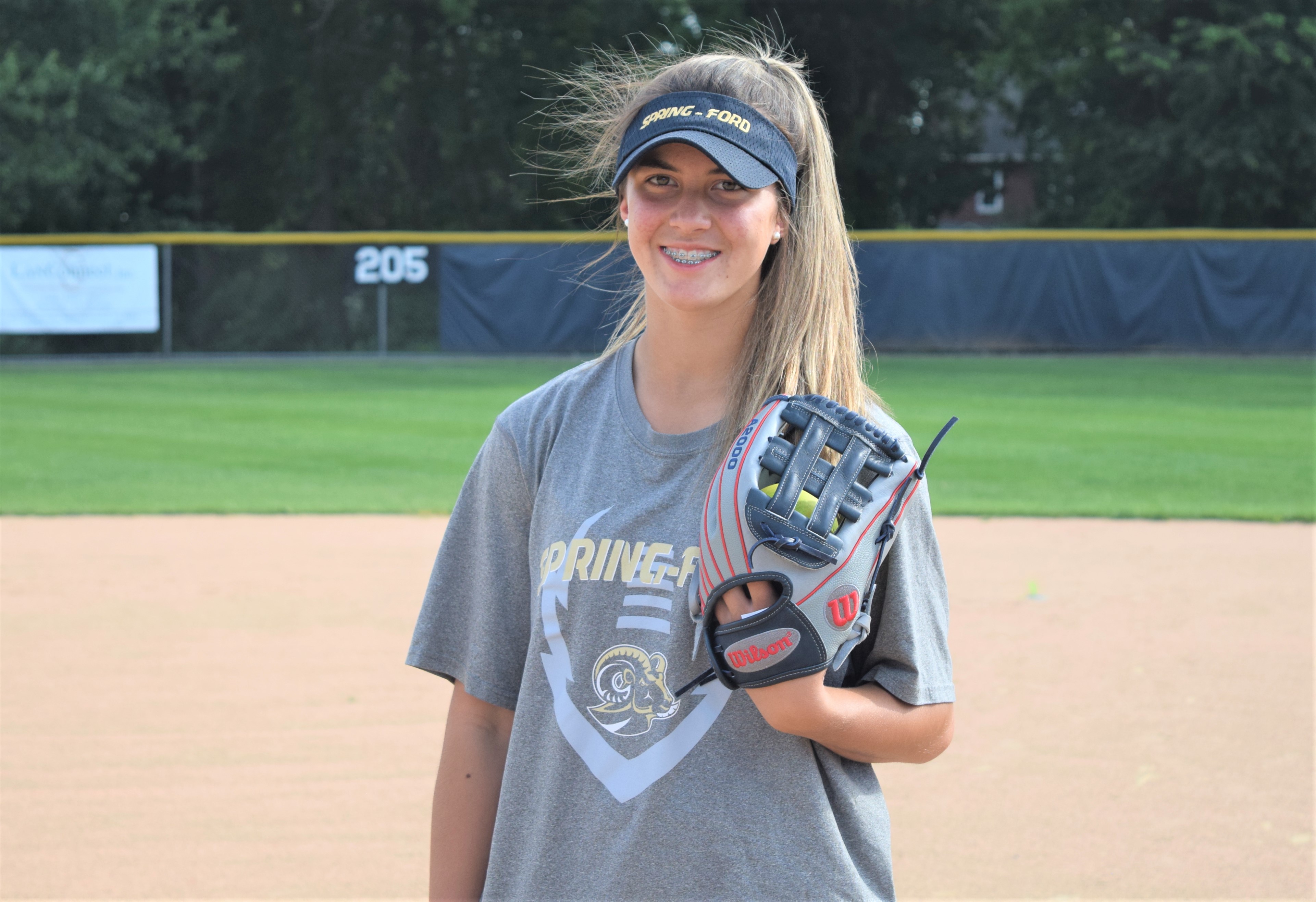 Brianna Peck entered her sophomore season with the Spring-Ford softball team expecting to pick up where she left off: as the team’s starting shortstop.

Peck did pick up there. But as the season progressed, she found herself pulled toward the pitcher’s circle. So much so, the sophomore right-hander was getting the nod for the Rams’ biggest games from mid-April on.

The results were indisputable as the sophomore’s emergence at pitcher, coupled with her power and prowess at the plate, led the Rams to their second straight undefeated season in the Pioneer Athletic Conference, a PAC championship and run to the PIAA Class 6A semifinals, matching the program’s deepest run ever.

People near and far took notice of Peck’s brilliant season where she hit .474 with a team-high 12 home runs and 35 RBI and amassed a 16-1 pitching record with 160 strikeouts and a 0.797 ERA. She was named Pa. Gatorade Player of the Year at the end of May and now adds Mercury All-Area Softball Player of the Year recognition to her sophomore year resume. Not bad for someone who just last year “did not like pitching at all.”

Peck was called upon as a relief pitcher during her freshman season with Spring-Ford and showed the live arm and flashes of excellence she would become known for. But pitching was out of service to the team rather than a source of enjoyment at that time.

It wasn’t for the first few months of her time meeting with fastpitch instructor Joe Ferguson, based out of Spring City, either.

“At first, I did not like pitching at all,” said Peck, “before I started going to my new pitching coach, Joe Ferguson.

“For a couple weeks pitching with him, I hated it. But as I continued it was exciting; he helped me a lot. It just sunk in and became something I was good at, so I was just taking it in and enjoying it.”

Ferguson didn’t know how their early sessions were going in the early going. Feedback was at a minimum.

“She was very humble and quiet. Going in, I didn’t know if she liked to pitch or she didn’t. The first few months, she hardly said anything to me,” Ferguson said. “So I didn’t know how it was going other than I knew she was timid about pitching and wasn’t really crazy about it.

“I just gradually introduced a few pitches, tried a few things and she really took to it. She started trying different pitches and working at it. I gradually built a rapport with her and took the time for her to get comfortable with me and trust me. That eventually took place, and she blossomed over time.” Peck came armed with six pitches this spring – “fastball, changeup, drop, curve, screw and riseball,” she lists – and leaned on her devastating riseball while racking up four no-hitters, one against PAC runner-up Methacton in a regular season and a perfect game against Garnet Valley in the second round of the District 1-6A playoffs, a cathartic victory that ousted the opponent that eliminated the Rams a year before and clinched a spot in the state playoffs.

“(I found enjoyment in pitching) just by getting better at it and working on each pitch and getting stronger and throwing harder,” Peck said.

She projected behind four-year starter Samantha Lindsay, a Division I Fairfield commit, on the pitching depth chart but started getting the nod as the No. 1 starter from head coach Tim Hughes increasingly throughout the season, noticeably getting the nod on April 10 against last season’s nearest PAC rival, Owen J. Roberts, and twirling a one-hit shutout.

“I didn’t know I was going to be pitching as much; I thought I’d be playing shortstop. But it was exciting as I got to help the team out,” Peck said. “I knew I had the team backing me up.” Spring-Ford’s Bri Peck bloops a two-run single over the right side against Parkland in a PIAA 6A quarterfinal Thursday at Moravian College in Bethlehem. (Austin Hertzog – MediaNews Group)

You couldn’t draw up a better temperament for a top pitcher: Peck is unassuming and unflappable, quiet to some but also known as the one keeping things light around the Rams’ team.

“Bri always has that side of her, that if somebody’s down about something, she’ll say something funny and they’ll forget about it, or she’ll do something and we’ll all laugh at her. She always lightens everybody’s mood,” Della Guardia said.

She’s tough to rattle, and even if there’s a small shake, she isn’t going to show it.

“I was stressed at times, but I’m just used to not showing it because that’s my objective to not show emotion,’ she said. “If we’re down or struggling, I’m not going to show it. Over the years I’ve grown into it and have often been told that college coaches want to see how you react to different situations.”

The highlights were plentiful during Spring-Ford’s postseason run, winning the PAC championship over Methacton, 5-0 on May 16 – Peck considers it her most memorable moment of the spring – blanking Garnet Valley in perfect-game fashion 8-0 on May 24 and the season-validating 4-1 win over District 11 powerhouse Parkland in the PIAA 6A second round on June 6.

“Having a pitcher like her is a confidence booster. Going into the field with someone like her who is such a young, talented team player, it’s amazing,” senior third baseman Jules Hughes said during the postseason. “She just goes out there ready to play for the team; she doesn’t care about the other stuff. She wants to win – with us.” Spring-Ford pitcher Bri Peck delivers to the plate against Downingtown West in a District 1-6A softball semifinal at Spring-Ford. (Austin Hertzog – MediaNews Group)

Peck’s Spring-Ford season ended on a down note: she was suspended for the team’s season-ending loss to Hazleton in the PIAA semifinals after violating a team rule by pitching for her club team, PA Strikers, the weekend before.

“It was hard. But I made my decision and I said I would take any consequence that was given. It did affect the team,” Peck said.

She was authorized to play shortstop and bat but was asked to not pitch. The Strikers’ starter had allowed three runs in the first two innings and despite taking a 5-3 lead, coach Camille Hayes asked Peck if she wanted to pitch.

“Our pitcher was struggling and the pitcher who was going to come help so I didn’t have to pitch got sick, so then I went in, my coach asked me,” Peck said. “(The Strikers are) also my team so I have to help them. I wanted to help both teams at the same time.

“There was (thought about potential consequences with Spring-Ford), but I have to help everyone out. I can’t just sit back and watch someone struggle.”

The unfortunate end didn’t overshadow the impressive body of work that gained attention on the state level with the Gatorade Player of the Year award.

“I was so excited. I honestly didn’t think it would ever happen. I would have thought there would be a lot of better players out there,” Peck said.

And she still has two more years to make an even greater impact.

“I just hope it gets even better and that I get the same opportunities next year,” she said.