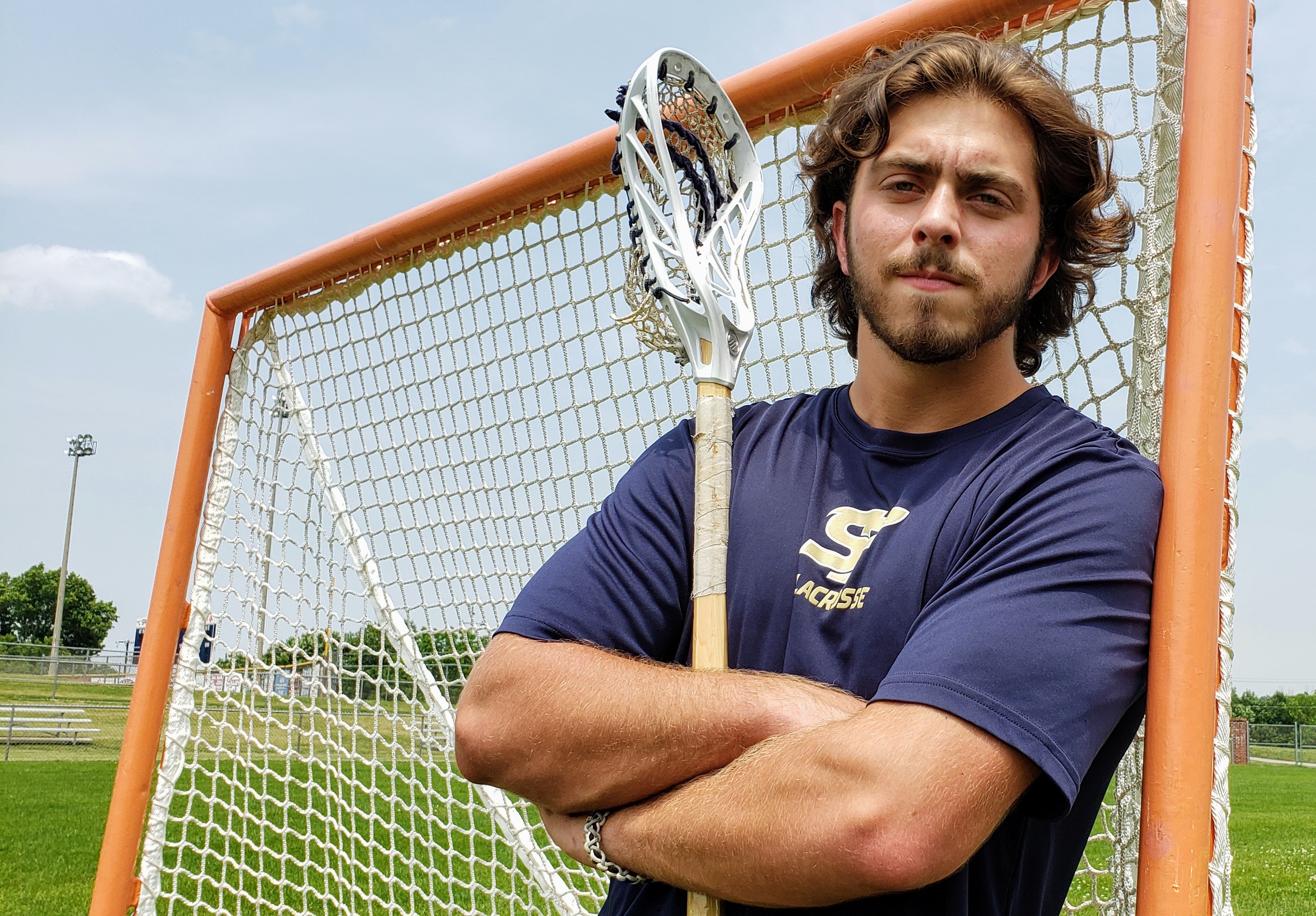 Dean Costalas refers to it as his ‘calling card.’

Area attackmen likely have a much less complimentary name for it.

‘It’ is a wooden lacrosse stick, and it serves as the perfect symbol of the hard-nosed approach to the sport that made the Spring-Ford defenseman the 2019 Mercury All-Area Boys’ Lacrosse Player of the Year.

Lacrosse sticks made of wood represent the origins of the sport but have largely fallen by the wayside in favor of lighter, flashier equipment in recent years. But Dean Costalas is anything but flashy.

A senior heading to Providence College in Rhode Island to play Division 1 lacrosse next year, Costalas was the leader of a Spring-Ford defense that allowed less than six goals per game — the second-best rate in District 1 — and brought a staggering ninth consecutive Pioneer Athletic Conference championship to Royersford. Whereas some coaches or programs will point to a number of caused turnovers or ground balls accumulated by a defenseman, Spring-Ford’s coach Kevin Donnelly believes the play of Costalas and his teammates is better explained through those on-field results.

“I’m very happy that I don’t have to coach — or play — against our defense,” said Donnelly after one victory this season. “This group is physical, they’re aggressive, and they let their play speak for itself.”

The Rams’ defense was certainly heard throughout the PAC this spring. In a total of 12 games (including postseason) against PAC opponents, Spring-Ford’s defense surrendered only 44 total goals, an average of less than four per game. Not surprisingly, the Rams achieved a flawless 12-0 record in those games on their way to the title.

With Costalas leading the way, the entire SF defensive unit took a giant leap forward against the most challenging nonleague schedule in recent program history. Battling perennial state title contenders Avon Grove, Springfield-Delco (twice), Radnor, Downingtown East, and others, the Rams allowed double-digit goals in a game only three times while holding eight different opponents to three goals or fewer in a contest.

“I think we really learned to communicate as a unit this year,” said Costalas. “As the year went on, I tried to hand that role to (junior and fellow first-team All-Area defenseman) Blake Terrizzi. It’s going to be his unit to lead next year.”

Costalas and Terrizzi were joined on defense by a pair of multi-sport athletes in senior Nick DelRomano and junior Ryan Kolander. Costalas takes credit for recruiting DelRomano to the sport of lacrosse a few years back, and it paid dividends this year as the senior split time with Kolander alongside the two All-Area performers.

“Blake’s natural talent will take him far,” predicted Costalas, “and Ryan (Kolander’s) bringing his football skills to lacrosse. We’ll be in good hands on defense next year also.” Back to that calling card, Costalas’ wooden lacrosse stick is one he’s been taking onto the field for the balance of the 2019 season. The stick is a strong symbol of who Dean Costalas is as a player, but its story of origin paints an even clearer picture.

“Well, the company who made the stick is no longer in business,” laughs Costalas, as he begins to tell a story he’s likely repeated dozens of times, “but they had a policy that if you break a stick within six months, just send along a picture and we’ll replace it free of charge.

“After I managed to break five sticks over the past two seasons, I received my own email from the company pointing out the repeated breaks, and they finally sent me one with this polyurethane finish. I prefer the pure wood, but this has been doing the job.”

Costalas says there’s no truth to the rumor he was smiling in each picture with the broken sticks. He is, however, more than happy to share the stories behind each fracture.

“One break, it happened in a (scrimmage). I met someone at the crease, at (goal line extended). He came up, I came down and drove out with the stick … and it just split down the middle. Same thing at Springfield-Delco. Late in the game, fourth quarter, we needed to get the ball back. So I’m working on this guy, and it just gives way. Shoots straight up in the air, so I had to get off the field so I don’t get called for an illegal stick.”

“Then at Methacton, their Senior Night. OK, that one was a little bit of revenge. We’re working on a clear and I got stripped — the kid knocked it right out of bounds. As soon as he got the ball back — crack! –and there goes another stick.”

Costalas got his payback, but says he bears no ill will. “I think it was probably his best play of the night,” he said of the offending attackman.

In an era where contact and collision sports are trending towards emphasizing finesse and less physicality, Costalas makes no apologies for his old-school, fundamental-based, intimidating style of play. To watch Costalas on the field is to view a clinic in how to methodically, but surely, break an opponent’s will with a combination of skill, experience, and brute force.

The picture here is not one of a dirty player — Costalas wasn’t penalized for any of the plays described above, and accumulated a modest number of fouls over the season — but one who draws his lacrosse roots to a time where defensemen were not only allowed, but expected to be rough, physical initiators of contact between the whistles.

John Costalas is Dean’s father and a former defenseman at Springfield-Delco and Drexel University. The younger Costalas credits his father for letting him find his own path to lacrosse — Dean didn’t start playing competitively until the 5th grade.

“Even before that, I spent a lot of time with the stick in my hands in the backyard,” said Dean. “My parents (John and mom Billi) encouraged me to try all kinds of activities. I think Dad always hoped I’d find my way to lacrosse, but he never pushed me. I’ve met some kids whose parents push them in a direction and they end up regretting it. The kids burn out. This was something I wanted to do.”

Once Dean found his way to the field, John ensured he’d have a proper foundation in the right way to play the game. “I started out playing defense with a short stick,” Dean recalled. “My dad wanted to be sure I had proper footwork and fundamentals, and wasn’t just a stick out there.

“My first game, I made four kids cry. That was fun.”

The unapologetically physical nature of his game is a big part of the reason Costalas’ Spring-Ford teams have been able to maintain their PAC dominance over his career. Watch the Rams play, and you don’t see much of a difference in approach whether it’s a PAC playoff game with Owen J. Roberts or Perkiomen Valley, a nonleague tilt with a powerhouse like Avon Grove or Radnor, or a conference game against an up-and-coming squad like Phoenixville.

“We don’t focus on any one team,” said coach Donnelly, “but you’ve got to play the best to be the best.”

“One game at a time,” Costalas echoed. “We don’t get too hyped for any one game.”

But both coach and player admitted there is something special about the Perkiomen Valley rivalry — one that gave the Rams a bit of a wake-up call in the regular season this year. “They gave us a real battle,” admitted Costalas. “So when we saw them again (in the PAC championship) we were determined to extinguish that fire.”

The result was what Donnelly called his defense’s signature performance, as Costalas and his teammates handcuffed the Vikings’ offense en route to a 10-3 victory and their 9th straight PAC title.

“Dean’s an X-factor for (Spring-Ford), and has been for years,” said Perkiomen Valley head coach Bryan Churchey. “He’s known as the guy who uses the wooden stick, and my players will tell you, when he throws a check you feel it for days afterward. He’s a special type of player.”

Churchey and the Vikings couldn’t have been especially excited to draw the Rams again in the first round of districts, where Spring-Ford advanced in an 8-3 outcome that looked suspiciously similar to the PAC title game.

Next up for the Rams was top-seeded Springfield-Delco, and while SF’s season came to an end, they repeatedly threatened the No. 1-seeded Cougars in a 9-7 game that was a vast improvement over a decisive 10-4 Springfield victory just one month earlier.

“We evolved over the season, we cleaned up our mistakes,” said Donnelly. “We were a little unfortunate in terms of seeding, but best of all the energy and passion we showed against PV in the playoffs and Districts carried over to that game.” For Dean Costalas, it’s on to Providence College, where he said he felt at home talking to the coaches, who willingly and easily discussed more than just lacrosse with him. “They wanted to know where I’d been in town, on campus, where we’d gone to eat,” said Dean. “They were easy to talk to, I found them very personable and likable.”

“Dean is a very unique person,” added Donnelly. “He’s a great leader, for one, but he’s got so many different interests. He’ll talk to you about anything.”

Indeed, a meeting with Costalas took us through all topics from recent professional and college football history to favorite comic book characters. But the talk always steered back to lacrosse and different theories and approaches to the game.

“I’m a defenseman, and it’s a position that allows me to be physical and punish my opponent,” Costalas said. “I want to go out there and bully someone within the confines of the rules. My dad was the same way. We’re not fast people in my family — we’re a little stronger, a little stockier. We are built to play this position.”

Which brings us full circle to the ‘calling card’ that is the wooden lacrosse stick. Costalas carries the stick — literally, as we meet on a Tuesday afternoon — as a badge of honor.

“Guys come out and play against me for the first time, they see it… ‘Is that… wood?’ Or maybe they’ve played against me before, and they start flashing back to the last game. They know it won’t be easy. They’re gonna take some damage over the next four quarters.”

“There aren’t a lot of fancy stick checks with Dean — he just takes the ball away,” summarized Donnelly. “When I talk about him, I say that Providence is getting an old-school defenseman who just does things the right way.”

They just better make sure they have plenty of extra lacrosse sticks on hand.