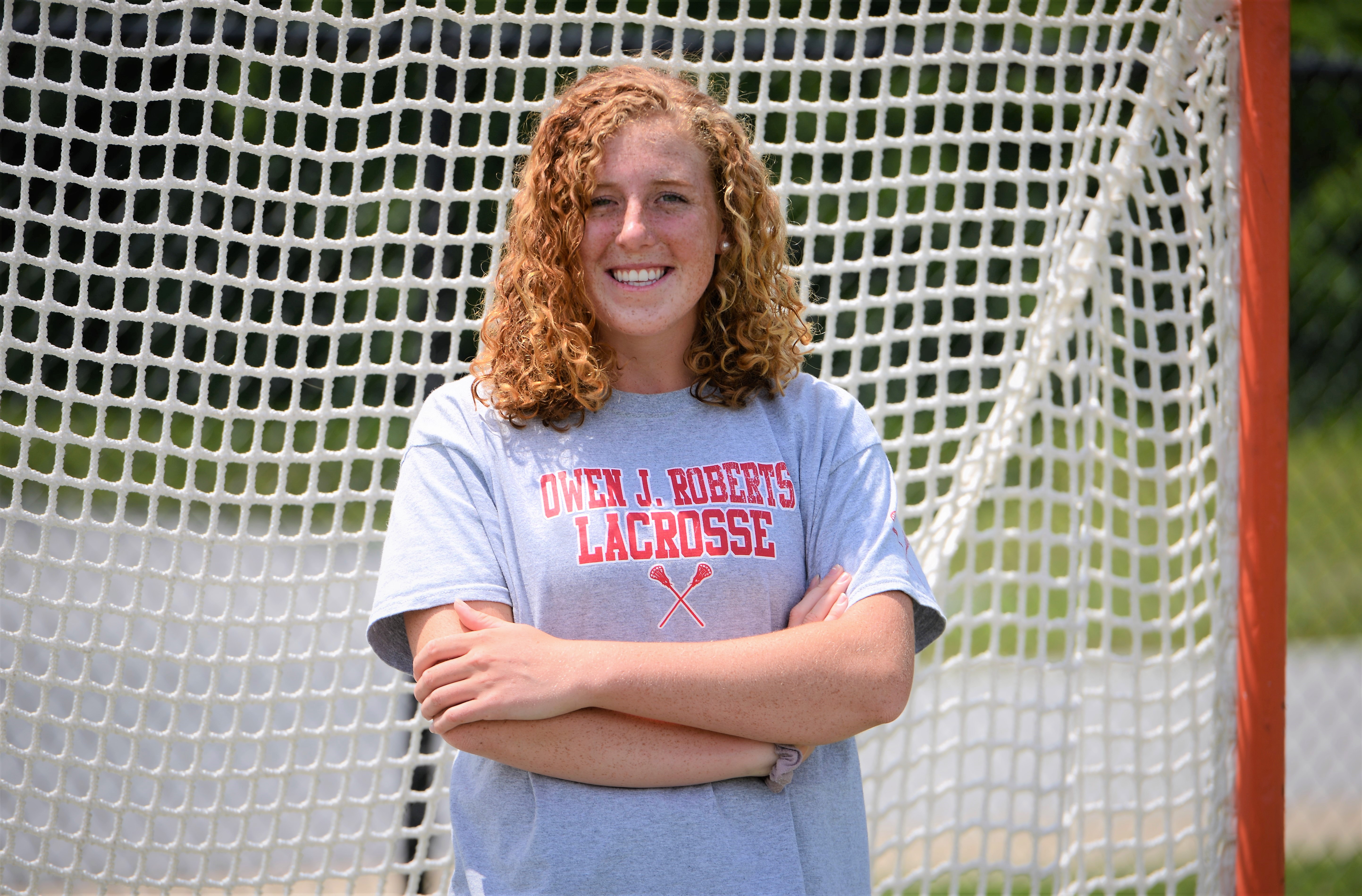 About 10 years ago, Paul Gebert flattened the field in his backyard, setting up a lacrosse goal with an eight- and 12-meter arc.

The backyard setup was one of the places his oldest daughter Maddie crafted her skills on the way to becoming the Mercury’s All-Area Player of the Year in 2015 and 2016.

One of Maddie’s biggest rivals on that backyard field was her younger sister Eloise, who always thought she could take her sister despite a three-year age gap.

“A lot of practice against each other, more beating each other up in the backyard without any parental supervision,” Maddie recalled. “Mostly getting annoyed with each other, but I guess that made us stronger on the field.”

The backyard battles against her older sister turned Eloise into quite the player herself. Eloise Gebert helped lead Owen J. Roberts to a fifth straight Pioneer Athletic Conference title this season on her way to joining her sister’s elite company as the 2019 Mercury All-Area Player of the Year.

“As sisters, we’re always trying to compete and see who can do better here and there,” Eloise said. “Seeing her do so well has just pushed me to try harder.”

Eloise gave the credit to her father, who played on the club lacrosse for three years Penn State, for helping her develop her lacrosse shot. She said her interest in lacrosse began tossing the ball back-and-forth with Maddie in the backyard.

As the two got older, Eloise picked her sister’s brain about things like learning new moves, even though some of those training sessions didn’t always end with sisterly love.

“One of the times I threw the ball back in her face and almost broke her nose, but she really pushed me,” Eloise said.

Having an older sister involved in lacrosse meant Eloise tended to start things earlier than her peers.

While Maddie began playing travel lacrosse as a third grader, Eloise started in second. When Maddie went to camps for her age group, Eloise tagged along as well, usually the youngest one there.

“I think she was very competitive with me,” Maddie said. “Since I started a year or two before her, she was always aggressive in seeing if she could be better than I am even though she was three years younger. Every time I was doing something, she was doing it twice as hard.”

As an eighth grader, Eloise sat in the stands watching her sister and the Wildcats end Boyertown’s run of 11 straight PAC titles. The next season she was on the field as a freshman with Maddie helping OJR win another league title.

The last name Gebert was well-known in the area by then. Eloise said following her sister, who has gone on to play at Temple, brought added attention and expectation, but also a comfort in knowing just how good she could potentially be.

“I felt (the attention) a little bit my freshman and sophomore year just because everyone knew my sister,” Eloise said. “They had heard her name before and knew she was strong, so they expected it out of me.”

“There was a little bit (of pressure), but it also made it easier because she had paved a path for me, and I just had to keep up with what she was doing,” she added.

Over the past four years, Eloise has made her own name ring loud through lacrosse circles in the area. The midfielder scored 90 goals, tallied 23 assists and won 101 draw controls for the Wildcats this season as the Wildcats claimed their fifth straight PAC title and third state win in four years.

Eloise was voted by the league’s coaches as the PAC Player of the Year. She represented the Wildcats’ girls lacrosse team on the PAC All-Academic team and was OJR’s Citizen Award recipient for the spring sports season.

“She’s just an amazing kid. She’s very mature. She’s a natural leader and just a remarkable talent,” Schlesinger said. “I think the recognition follows the accomplishments as well as people seeing what kind of person she is.

With a prolific high school career behind her, Eloise will now continue her lacrosse career at the Naval Academy.

She said after looking at the school as a freshman, none of her other campus visits compared. Part of the reason is the long military history of her family.

“My dad was in the Coast Guard. My cousin is in the Navy now,” Eloise said. “I’ve had grandfathers be in the Navy. My great grandfather was in World War II. One of my grandfathers was on the Lusitania. We’ve had a ton of military in my family.”

Maddie, who will be a senior at Temple next year, said her team traveled to Annapolis, Md. last year to play Navy in fall ball.

There’s a shot the two teams will play once again this fall, setting the stage for one last matchup between the Gebert sisters. Other than that potential meeting, Maddie will continue to pull for her younger sister to thrive on and off the field.

“I think she’s going to excel,” Maddie said. “She’s got the hard work ethic. She’s not too distracted socially or anything else like I would be. I think she’s really going to succeed.”