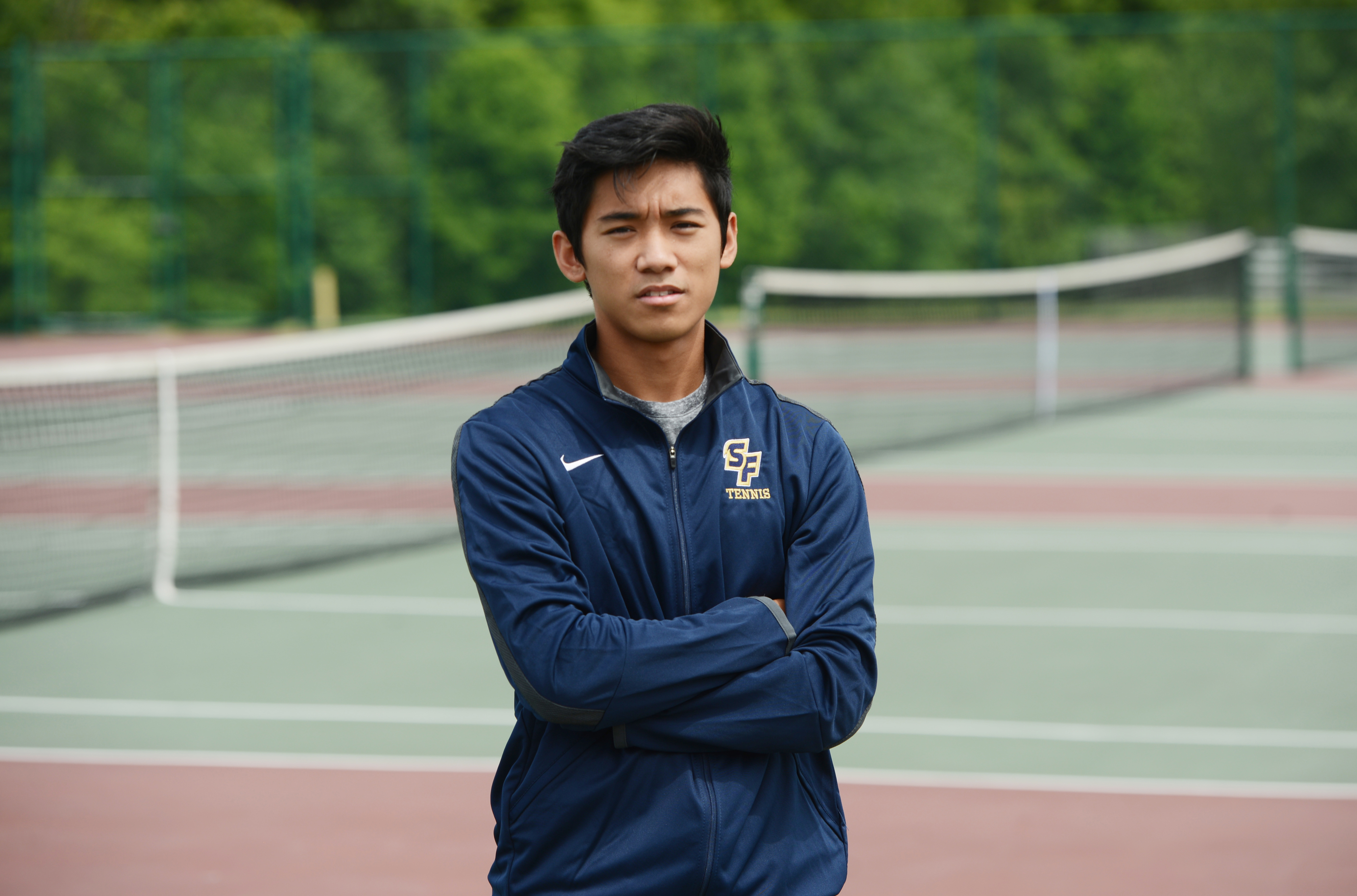 To that end, he is looking to play in as many United States Tennis Association (USTA) tournaments as possible this summer. Pascual also assigns value to playing in high school, continuing as the standard-bearer for the Spring-Ford boys team his junior year.

“For me, it’s more like the experience … getting team experience,” Pascual said. “I got good experience with that this year, and the past three.”

Pascual’s spring was marked by several encore performances, and improvement in other categories — all of which emerged as noteworthy experiences. He repeated as the Pioneer Athletic Conference’s singles champion and stood out in doubles play at both the league and District 1 levels. Those accomplishments were key to him repeating in another capacity: The Mercury All-Area Boys Tennis Player of the Year.

Pascual was unbeaten in 11 PAC matches, going 16-1 overall at first singles. In the league’s singles tournament, he dropped just nine games against four opponents, all of whom he dispatched in straight sets on the way to the repeat title.

“I felt this year there were a lot of people trying to take me down, coming in as the defending PAC champion,” he said. “In the end, it doesn’t affect me. I just go out and take care of business.”

Pascual got his business in order starting against Methacton’s Harsha Santhanam and Perkiomen Valley’s Will Ye. He followed with a 6-0, 6-0 sweep of the Vikings’ Aaron Fry in the PAC semifinals before dispatching Phoenixville’s Josh Starczewski 6-1, 6-0, in the final.

“It’s something I understand, being at the top,” he said. “There’s always people trying to take your spot, get the better of you.”

Repeating as PAC singles champ kept Pascual in position to equal older brother Patrick’s three-peat during his scholastic career at Spring-Ford from 2013 to 2016. He also came close to winning the league’s doubles title, teaming with Adit Jain to finish as the PAC’s runners-up.

The top-seeded Pascual/Jain tandem was extended in its quarterfinal and semifinal matches while qualifying for the championship. That match went three sets, with Methacton’s Harsha Santhanam and Adam Zhang winning 6-2, 5-7, 6-4.

In the earlier rounds, Pascual/Jain topped PV’s Ben Mous and Carter Young 6-2, 6-0, and Upper Perkiomen’s Ian Costanzo and Aiden Dockery 6-1, 7-5. They were extended to three sets by Methacton’s other doubles team, Aaron Zhang and Krishna Pillutla, 6-1, 4-6, 7-5.

“It was definitely a different experience than last year,” Pascual, previously teamed with Nolan Schweitzer, said. “Learning how a partner thinks and reacts.

“We tried to work well together, and establish good communications.”

He and Jain were the PAC’s representatives to go furthest in the District 1 Class AAA competition. They outlasted Quakertown’s Zach Pernia and Andrew Miller in a three-set opener, 1-6, 7-5, 6-3 but bowed out with a 6-2, 6-1 setback at the hands of Wissahickon’s Andrew Tran and Vidat Makwana.

Spring-Ford head coach John Brennan lauded the collaboration of Pascual and Jain in post-season doubles, particularly in consideration of their limited experience as a team.

“Winning at singles and doubles is great for Malchu and the program,” Brennan said.

Spring-Ford’s Malchu Pascual hits a backhand against Methacton’s Adam Zhang during their match at No. 1 singles at Spring-Ford this season. (Austin Hertzog – MediaNews Group)

Pascual had an even more promising outing in district singles. He came within a match of qualifying for states, winning the first two rounds, but he was unable to get the better of Unionville’s Tristan Bradley and Radnor’s Max Safanov.

Pascual handled North Penn’s Ansh Sharma at the start, 7-5, 6-1. He then had a battle with Conestoga’s Peter Auslander, extended to a three-set tiebreaker 4-6, 6-4, 7-6 (7-2) but able to reach the pivotal quarterfinal round.

“It was a roller-coaster,” Pascual said of his second district match. “There were a lot of things I could have done better. I had the lead in the first set and had control, then I lost the second set.

“I definitely could have done better in the match, but the experience as a whole was good.”

Pascual came into the 2019 season concentrating on several aspects of his game.

“I definitely tried to improve my serve, and my mental strength,” he said. “Most of the game is mental … it happens in the mind. Knowing a lot of matches come down strong, win or lose, work to get stronger.”

In consideration of Pascual’s skill set and mental focus, Brennan takes a modified approach to his coaching posture.

“I don’t want to get in Malchu’s way,” he said. “He has success on his own. I give him little doses during a match… execution, strategy, mental notes.”

Assistant coach Ryan Rendick, a veteran of the sport at the collegiate and USTA levels, is a distinct asset to Pascual’s development.

“I want Malchu to learn from him,” Brennan said. “The more he does, the better he’ll be.”

Pascual’s summer plans include participation in as many USTA tournaments as possible. He figures to start that regimen a couple weeks after school is done for the year.

“I want to build up a resumé for college,” he said. “Once I get more results on my record, I will have more understanding of the process.”