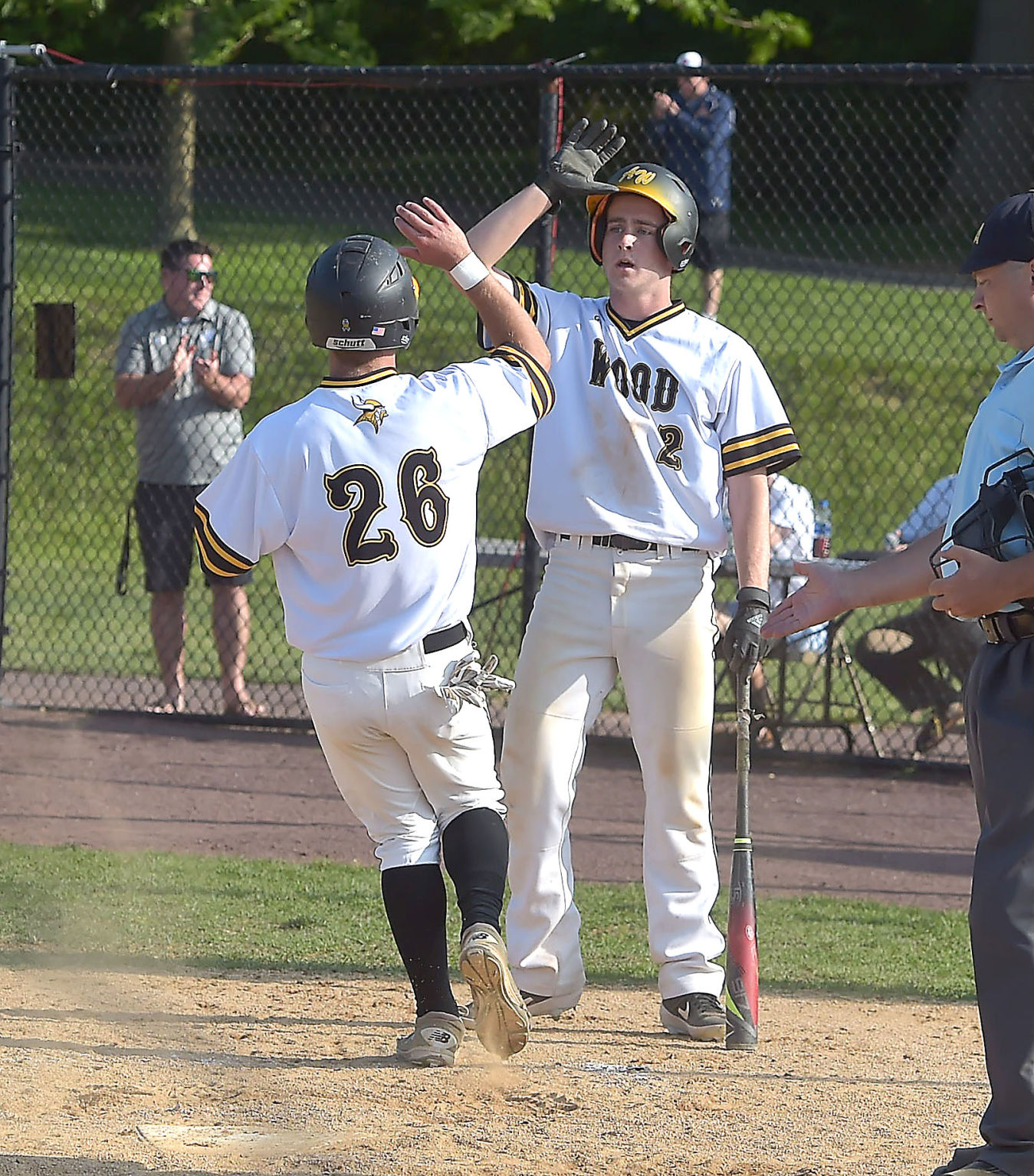 SPRINGFIELD >> Archbishop Wood came into its matchup with Bayard Rustin in the first round of the PIAA-5A playoffs as a clear favorite.

After securing its fifth District 12-5A championship in the last six years by beating Frankford, the Vikings looked to carry this momentum into the final postseason tournament of the year.

Wood’s opponent—West Chester Rustin—ended the regular season one game above .500, but it displayed its potential in District 1-5A playoffs, upsetting Phoenixville and Interboro as the No. 12 seed. The Golden Knights finished fourth after losing to Holy Ghost Prep and Marple Newton, but they had made their presence known and would certainly pose a stiff test to the Vikings.

On Monday, an upset nearly came to fruition. Rustin came out of the gates swinging as it raced to a 3-0 lead, but that advantage slowly began to dissipate as the Wood rounded into form. Using a walk-off single from Sam Reynolds, the Vikings escaped the first round with a 5-4 victory at La Salle College High School’s Ward Field.

As a result of this win, Archbishop Wood moves on to face Blue Mountain—which topped Gettysburg earlier today—in the quarterfinals Thursday.

“There’s eight teams left in the state of Pennsylvania in 5A,” said Wood head coach Jim DiGuiseppe. “Like I told my guys after the game, let’s continue to go out, enjoy the experience, and play hard. And where the chips fall—the chips fall.”

Early on, Rustin gave Wood a run for its money.

With a runner on first in the opening inning, second baseman Nick Halcovich came to the plate. He proceeded to blast a deep homer to right field, which gave the Golden Knights an early two-run lead.

Dave Linsalata, the starting pitcher for the Vikings, entered the contest with a 0.84 ERA and had not given up a home run all year. The junior rebounded as he struck out the next two batters to mitigate the damage.

Rustin continued to jump Linsalata in the following frame, though. Pat McDonough and Ryan Wittman each doubled to center, which resulted in a run crossing the plate, making it 3-0.

A Matt Fricker bunt then placed runners on the corners with zero outs, but Linsalata dug deep, retiring the next three batters to keep the Golden Knight lead at three runs.

Halcovich again struck—this time in the third—as he doubled to left-center. The second baseman then advanced to third off a bunt by Watson, but Linsalata downed the next two batters to hold Rustin at bay.

“When you get down early, it’s really easy to put your head down,” said DiGuiseppe. “But I thought we did a really good job of just continuing to play ball. That’s why you play seven innings.”

Archbishop Wood shortstop Bobby Hennessy (27) attempts to turn the double play as West Chester Rustin’s Dylan Demarco (26) is out sliding into second during their PIAA-5A first round game on Monday, June 3, 2019. The runner at first was safe. (Pete Bannan/MediaNews Group)

Ben Watson drew the start for the Golden Knights, and the senior displayed his strong chops on the mound, garnering a 1-2-3 inning in both the first and second.

And he looked like he was well on his way to another 1-2-3 inning in the third, but Wood finally broke through. With two outs, Morgan grounded to shortstop but beat the throw to first.

Sam Reynolds then hit a blooper that advanced Morgan to third while he stole second. With two runners in scoring position, Ryan Di Vergilis converted with a single up the middle, scoring both runners and cutting the deficit to one.

“I thought Ben pitched a great game,” said Rustin head coach Brad Harkins. “Give Archbishop Wood credit. They came up with big two-out hits today. And that was the difference in the baseball game.”

After giving up a hit to the leadoff batter in the first three innings, Linsalata started to settle in. Over the next two innings, his sole blemish was a walk to Owen King. Other than that, Linsalata retired the other six batters without much incident.

During the bottom of the fourth, Luke Cantwell and Aidan Myers each singled, putting themselves on first and second. With two outs, Matt Donchez came to the plate as a pinch hitter and he capitalized on the opportunity, drilling a double to left and scoring both runners. Wood—once down 3-0—had produced four unanswered runs and now possessed a one-run lead with three innings left to play.

Though Watson gave up four runs, the senior displayed his resiliency as he bounced back in the fifth and sixth to come up with much-needed 1-2-3 innings. And starting in the sixth, the Rustin bats began to reawaken.

Jacob Fails battled Linsalata in a long at-bat, and the outfielder prevailed, smoking a double off the wall. McDonough then reached first on his bunt while also moving Fails to third. With runners on the corners and no outs, the Golden Knights were stymied. Ryan Wittman lined into a double play, and Matt Fricker struck out, thus ending the threat.

Rustin had one last chance in the top of the seventh. The Golden Knights’ rally started off on the right foot as King came through with a double off Linsalata. At this point, DiGuiseppe Jr. subbed out his starter for Reynolds to close out the game.

“Sam’s a four-year varsity starter, and quite honestly, that’s why I gave him the ball,” said DiGuiseppe Jr. “In that situation, I felt that Sam was the guy to get the ball.”

Reynolds ran into some trouble, though. DeMarco bunted, placing King at third. Sean Hopkins was then hit by a pitch, and Halcovich walked, which loaded the bases with only one out. Watson gave himself some run support as he grounded out to second, but King crossed home plate, knotting the game at four apiece. With two outs and runners on second and third, Fails could not give his team the lead as Reynolds struck him out.

With the chance to walk off, Wood seized the opportunity. With a runner on first and two outs, Reynolds came to the plate. Ryan Albin slipped by for a crucial steal in the middle of the at-bat. Reynolds could put the game away, and he did, as he singled through the gap to right field. Albin rounded the bases and scored, securing a thrilling walk off victory for the Vikings.

“He came up right there in the bottom of the seventh,” said DiGuiseppe of Reynolds’ walk off hit. “He came up with a huge hit for us. He’s never going to forget that for the rest of his life, and neither will I.”

Meanwhile, Rustin’s season concludes after a thrilling playoff run. While the Golden Knights’ season may be over, Harkins is proud of his team and is optimistic about the future.

“We have a great group of kids,” he said. “I love those guys. I’d go to war with them any day of the week … I’m absolutely proud of these guys. Looking forward, they have set the tone for future groups to live up to and how to play the game.”