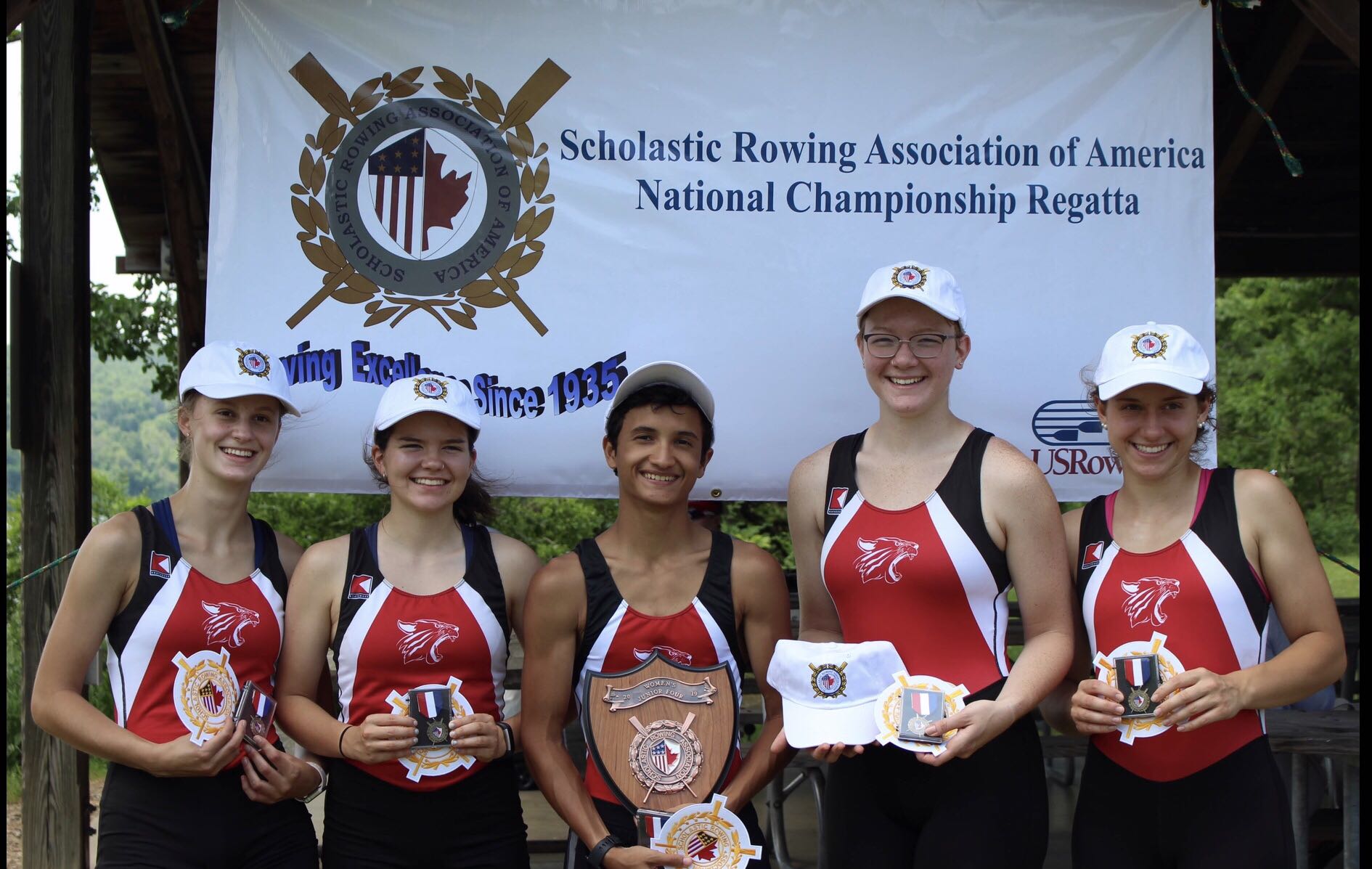 The Owen J. Roberts Wildcat Crew Club’s Junior Varsity 4+ boat wasn’t sure what to expect before they arrived at Scholastic Rowing Association of America National Championships last weekend, May 24-25.

A win at the Stotesbury Cup Regatta a week prior had certainly given juniors Maddi Braun, Haley O’Donnell, Stacia Subick, Sophia Ferrizzi and sophomore coxswain Alexander Lilly some confidence. However, there were still nerves until they got in the boat for their qualifying race on Dillon Lake in Nashport, Ohio.

“Honestly, I wasn’t really sure how we were going to do, but after the first day in the qualifier most of the teams were up against were ones we’d raced before,” Subick said. “We did so well in the qualifier that it really boosted the confidence going into the finals the next day. That’s when I realized, ‘We can do this. We got this.’”

After strong performances in two qualifying races, Braun, O’Donnell, Subick, Ferrizzi and Lilly wrapped an impressive spring by besting the national field with a first place finish in the finals at the SRAA National Championships.

“It was a really cool experience,” Braun said. “It was one of the first times our club ever got to win anything really. It was really cool to be able represent Owen J. in a way.”

OJR’s JV4+ boat posted a time of 5:54.813 in their first heat at the SRAA’s to advance to the semifinals, the fourth best time among the 24 entrants in the four heats. The group advanced to the finals with a time of 5:50.985 in the semis, which was the best in their heat and overall.

Braun, O’Donnell, Subick, Ferrizzi and Lilly saved their best for last, racing the final in 5:39.560 to beat second place Bishop O’Connell, out of Virginia, by more than two seconds (5:41.576).

“Over the season, I’ve been experience a lot of wins with these girls,” Lilly said. “When we got to nationals, there was the thought that we might not be able to win, but in the back of my mind, I thought these girls had it.”

The success at the SRAA’s was nothing new for the boat. Earlier this spring, OJR’s JV4+ boat captured first and second place finishes in the Manny Flick series of regattas and advanced to the Varsity 4+ finals of the Philadelphia City Championships from May 4-5.

Braun, O’Donnell, Subick, Ferrizzi and Lilly also claimed gold medals at the Stotesbury Cup Regatta, on May 17-18, topping 55 other teams for the first place finish with a time of 5:19.41 in the world’s largest high school rowing regatta.

The buildup of the season led into the team’s success at nationals.

“The week before (at the Stotesbury Regatta) gave us a lot more confidence,” Ferrizzi said of the SRAA’s. “Also because it was a scholastic race, and while we were racing at the Manny Flicks, which are scholastic races where we were also doing very well, it gave us confidence that we might have had a chance.”

The rowers found their way to the club, which started in August 2017, in different ways. Ferrizzi joined following 10 years of gymnastics. Braun needed to find another sport after her interest in field hockey waned. O’Donnell followed her brother into the sport after he rowed on the team and went on to compete in college. She brought Subick along with her.

Braun, O’Donnell, Subick and Ferrizzi are all juniors and have known each other for several years now. After trying several pairings in the boat early in the season, Lilly, a sophomore in his first season, fit in as the team’s coxswain after joining the club this year following the suggestion of a friend.

“We’ve definitely been really close,” Braun said. “Xander, it’s his first year, but he’s definitely one of the best, and we like him a lot. It’s automatic. Because we spend so many hours together, it’s almost just like the friendship is right in front of you.”

“This is my first year with this team, and I think the hardest thing, but also the most rewarding thing to train with them was just to show them that they can do it,” Sztancsa said. “Make them see their own potential, and make them believe in themselves. The moment they did, everything started blossoming.”

The group will be back next year, competing at the varsity level. A successful spring has them ready for the challenge.

“We’re really excited to come back next year, especially since we beat some of the varsity times this year,” O’Donnell said. “We’re just ready to train super hard over the summer, in the fall, over the winter, just to be that much faster in the spring.”