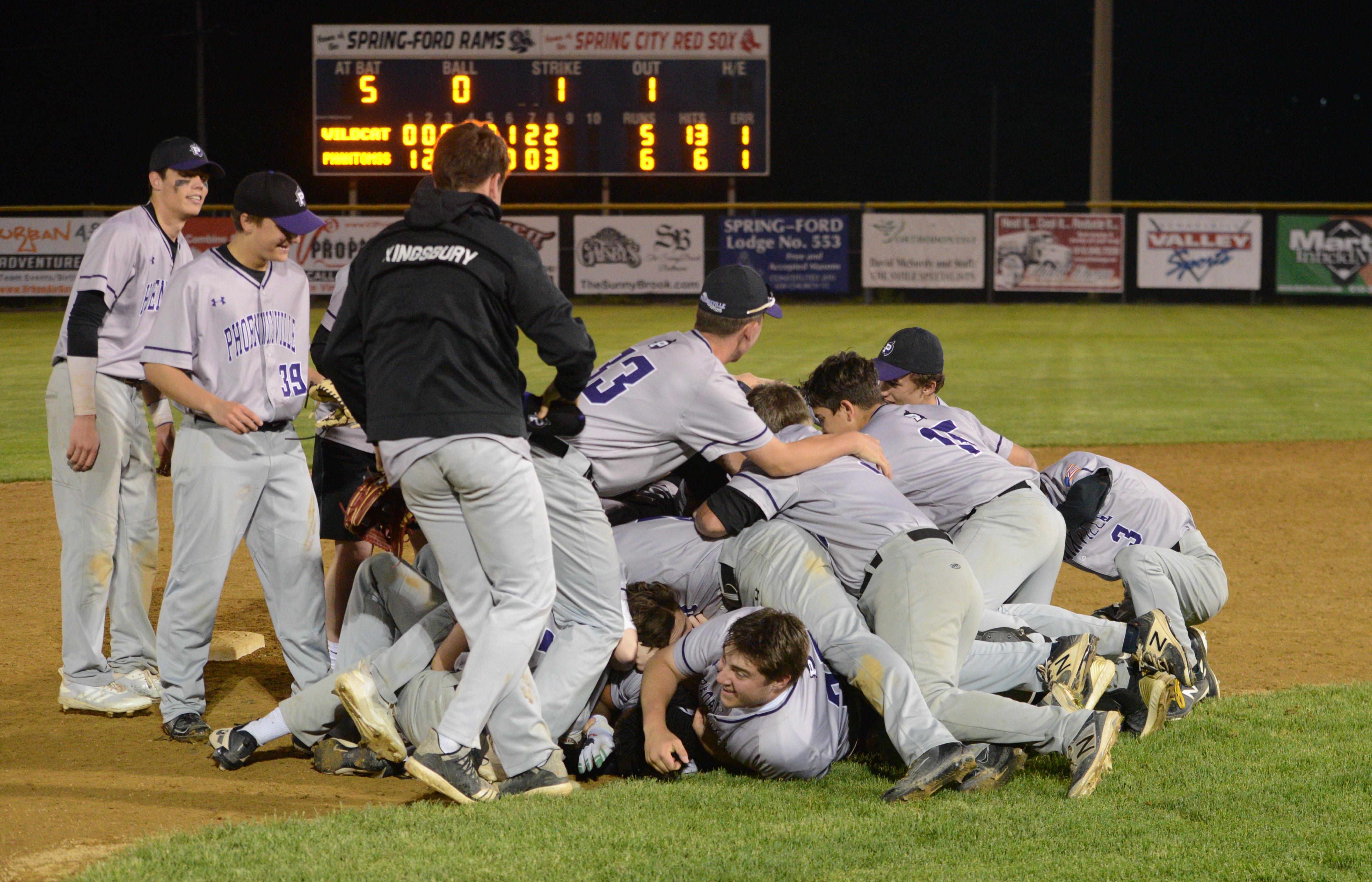 ROYERSFORD >> As Justin Blakey rounded first base and looked toward the Phoenixville bench, he knew what was coming for him.

Blakey’s two-RBI hit in the bottom of the eighth inning gave Phoenixville a 6-5 walk-offf win against Owen J. Roberts in the Pioneer Athletic Conference semifinals on Wednesday night. The Phantoms will play Spring-Ford at 7:30 p.m. for the PAC championship on Thursday.

Following the knock, he was greeted by a bear hug from first baseman Dylan Clark before being piled up on by the rest of the Phantoms out near second base.

“I was too happy at the moment, but then I saw Dylan, who’s kind of big,” Blakey said. “I was like, ‘Hold up. This is going to be painful,’ but it was all good at the end.”

Phoenixville led 3-1 entering the top of the seventh inning. An error, hit and slash loaded the bases for the Wildcats before Sam Morris tied the game 3-3 with a base hit to left field, knocking Phoenixville starter Luke Bagley out of the game. Bagley, who tossed a complete game in last year’s semifinal, had gotten out of jams in the four and the fifth before allowing a run in the sixth inning on a sac fly by David Bealer.

Phantoms’ lefty Will Trianosky entered the game and recorded three outs, including a strikeout with two outs and the bases loaded to keep the game tied. Ryan Glenn answered with a 1-2-3 inning for OJR in the bottom half of the inning to send the game to extras.

The Wildcats got to Trianosky in the top of the eighth. Jon Hannevig led off the inning with a triple. Jake Iyoob drove him in before scoring himself on a sacrifice by Glenn to give OJR a 5-3 lead heading to the bottom of the inning.

“They did a heckuva job coming back,” OJR coach Greg Gilbert said. “They showed a lot of character not giving up down 3-0. It’s really tough when you take the lead in extra innings and it gets away from you.”

Trip Shoemaker led off the bottom of the eighth with a double for Phoenixville. Ethan O’Donnell, who had three hits Wednesday, knocked him in. Dylan Clark walked and a bunt by Devon Goryl set the stage for Blakey, who already had a walk-off hit this season against Upper Merion. His line drive to left center scored the runners from second and third to win the game.

“I was in the dugout praying a lot,” Blakey said. “I was just like, ‘This is another moment I can have.’ When I went up to the plate, I really made sure that I got my pitch because I knew he could throw it right there for me.”

Phoenixville’s Justin Blakey, left, is congratulated by teammates after his walk-off hit against Owen J. Roberts on Wednesday.

The Wildcats hadn’t been in the league playoffs since a semifinal loss to Boyertown in 2016, when this group of seniors were freshmen.

Morris, the Wildcats’ starter, tossed shutout innings in the third, fourth and fifth innings after allowing three runs in the first two innings. Iyoob and Jack Rinehimer both racked up three hits. Hannevig and was 2-for-4 with two runs.

The Wildcats outhit Phoenixville 12-7, but could not come away with the win.

Phoenixville went to the PAC title game last season, defeating Methacton in the semifinals before a loss to Boyertown in the championship. Blakey and his teammates hope they can finish off the job this time around.

“This time I want to win it,” Blakey said. “Especially since it’s my senior year, I really want this game.”