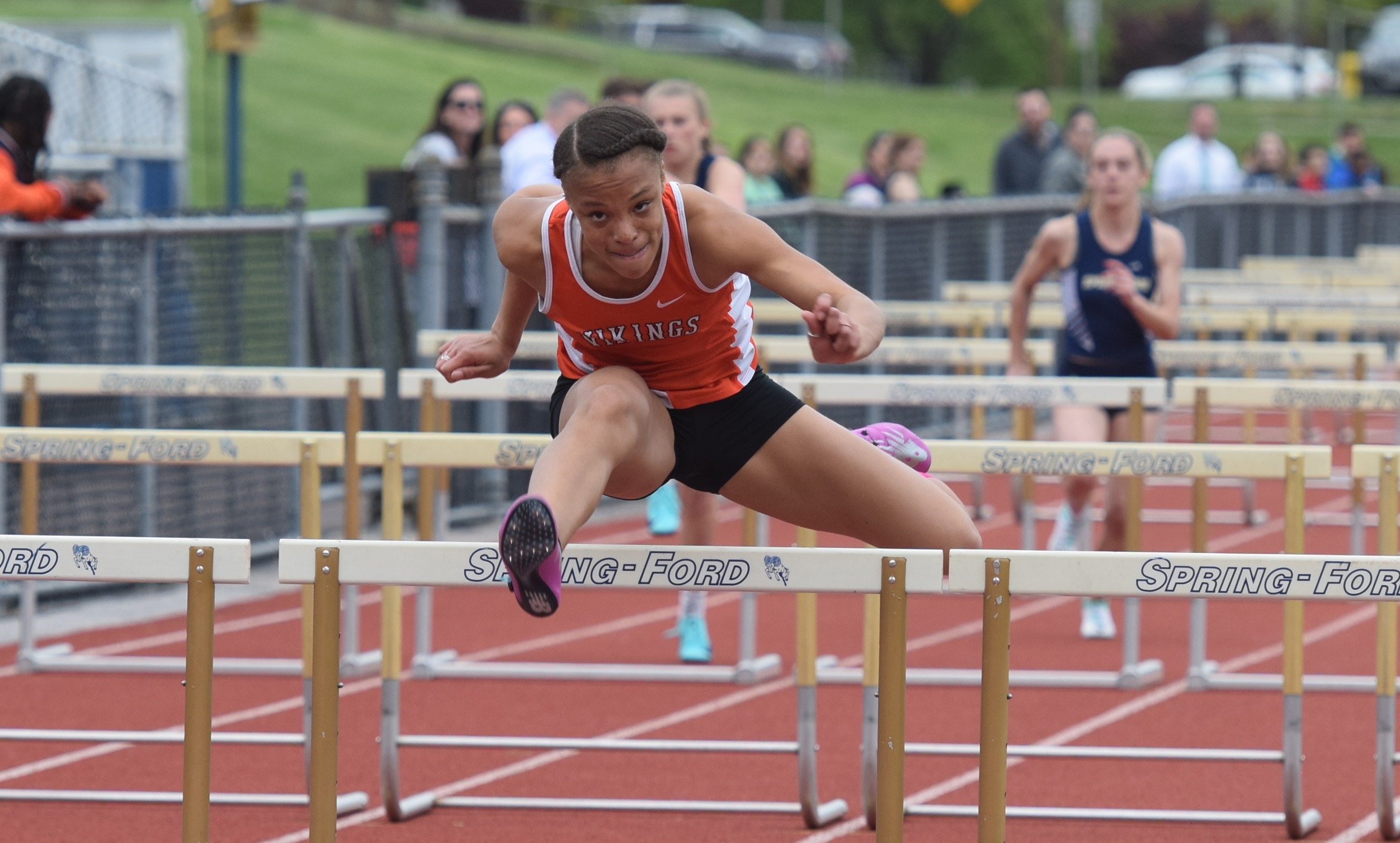 The second-to-last event of the day was a Perkiomen Valley sweep and left just the triple jump to determine if the Rams could complete an undefeated dual meet season in the Pioneer Athletic Conference.

Unsurprisingly, Warren won the triple jump to complete a four-win afternoon by the two-time Mercury All-Area Girls Track & Field Athlete of the Year, allowing Perkiomen Valley to edge Spring-Ford on a tiebreaker (event wins 10-8) after the dual meet ended 75-75.

The loss allowed Perkiomen Valley to finish level with Spring-Ford at 4-1 to top the PAC Liberty Division.

Warren was fresh off setting her personal record with a 41-4½ at the 125th annual Penn Relays last weekend. She was the top American finisher for the third straight year in finishing fourth behind Jamaicans Ackelia Smith (42-8¾), Lotavia Brown (42-5¼), and Rhianna Phipps (41-10).

“PR by three inches, I was very happy about that,” Warren said. “The higher stakes and the adrenaline helped me come through. The adrenaline brings that extra oomph to all of our marks.”

Rawley also anchored the Rams’ winning 4×100 relay (50.67) and finished second in the triple jump. The quartet of Kyra Scanlan, Hudson, Claire Lanzisera and Rawley competed at the Penn Relays last weekend, which Rawley said was a ‘great experience.’

With attentions turned more local, the S-F girls don’t intend to let Monday’s result affect their pursuit of the team title at PAC Championships on May 10-11 at Norristown.

“We had a few people who were injured or out sick (Monday) so we’re really hoping to come out strong for the PAC Championships,” Rawley said. “We haven’t won in over a decade on the girls side. I would love to win PACs my senior year.”

“We have a lot of really great underclassmen this year, and they’ve been performing extremely well. As the year has progressed I feel we’re getting better and better.”

The Perkiomen Valley boys finished the dual meet season 4-1, their only loss coming in Week 1 to Owen J. Roberts (4-0).

Track and field has offered the senior a redemptive arc after the Vikings’ football quarterback had the end of his final season derailed by an ankle injury and concussion that forced him to miss multiple games, including the PAC championship game.

He made the most of the opportunity in February when he won the state championship in the high jump at the PTFCA Indoor State Track and Field Championships.

“That was awesome,” he said. “I couldn’t have imagined when I was a freshman jumping 5-10 that I would be state champ as a senior. It was crazy but I was extremely happy.”

Last weekend he finished ninth at the Penn Relays, achieving a goal in the process.

“I went sophomore year to watch and that became my goal: I want to make Penn Relays, to be one of the kids jumping, by senior year,” Peterlin said.

In clearing 6-3½, he tied for best performance by a Pennsylvania athlete (Reading High’s Juan Mato-Segura also finished on 6-3½).

He’s looking at competing in track and field in college with Penn State and Liberty the current frontrunners, but old habits die hard.

“I miss football. But track is track. You look back and I do miss football … I wish I had another year of it,” he said.