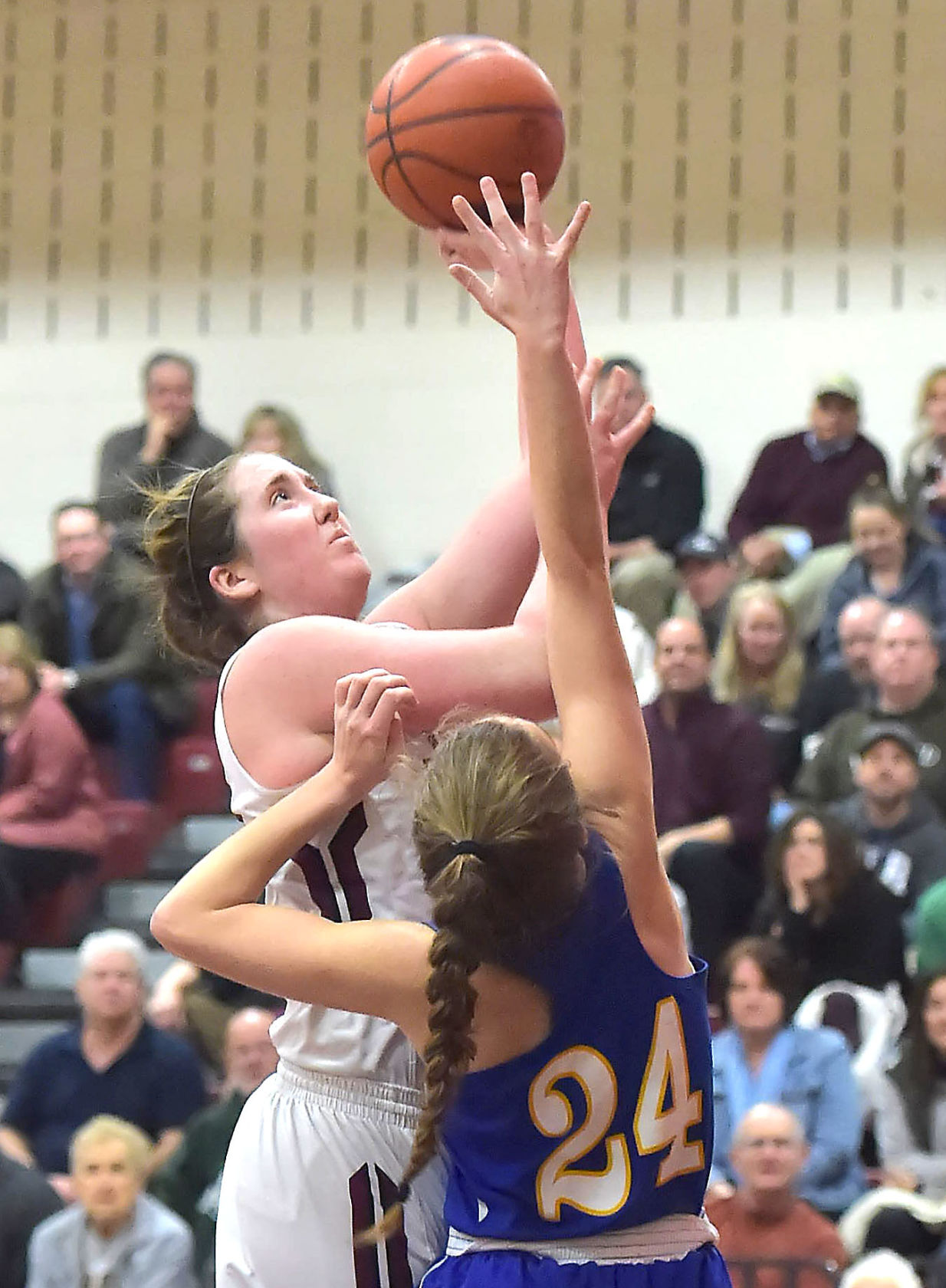 Emily McAtteer, pictured earlier in the season, led the way with 27 points in Garnet Valley's 62-40 rout of Bethlehem Freedom in the second round of the PIAA Class 6A tournament Tuesday. The Jaguars (28-1) shot 29-for-44 (68.2 percent) from the field.

FRANCONIA TWP. — The Garnet Valley girls basketball team has accomplished quite a during the 2018-19 season, winning the Central League and District 1 championships and setting a school record for wins in a season.

With that in mind, head coach Joe Woods and his assistants would have to spend some time trying to remember a more complete game than the Jaguars played in their 62-40 PIAA Class 6A second-round victory over Bethlehem Freedom at Souderton High School Tuesday night.

“A game like that is really fun to play in,” said senior center Madi McKee, who scored 13 points, grabbed 10 rebounds, had two assists, made one steal and chipped in with a blocked shot.

Woods was delighted by his team’s offensive effort, which included 29-for-44 shooting (68.2 percent) from the field with 19 assists. The Jags’ defensive work also brought a smile to the coach’s face. Garnet Valley (27-1) gave up only 10 points in the first half, and Freedom’s only two points of the second period came just seconds before halftime.

“They’ve been so unselfish, and they’ve been getting better every game,” Woods said. “The five seniors have been together for four years. They trust each other. They set a school record for wins, and they’re in the Elite Eight.

“Really the only thing that matters is that we have practice (Wednesday).”

Senior Emily McAteer, whose career point total has risen past the 1,700 mark, was exceptional Tuesday, shooting 11-for-14 from the field in getting 24 points. She also pulled down five missed shots, handed off five assists, made a pair of steals and blocked two shots.

In the first half, when she missed only the last of her eight shots, she accumulated 15 of her points and four of her assists.

“We knew we didn’t want that team shooting (3-pointers),” McAteer said. “We’ve worked on our man-to-man defense and tonight we kept after them. This is a big team win for us. When they tried to double us, we found who was open and got them the ball.”

McKee had nine points by halftime after making all four of her field goal attempts in the first two periods.

“We all try to be unselfish,” she said. “We all know to look for each other when we are out there. The past two years, teams have come back from halftime and played harder and we couldn’t get past this (round of the tournament). We’ve talked about this team making history, and today we gave ourselves another chance to keep on doing that.”

Senior Brianne Borcky’s playing time was limited in the opening half because of foul problems. She got eight of her 12 points, half of her six rebounds, and six of her seven assists in the third and fourth periods.

“We used our height advantage,” she said. “When we were working our offense, we’d look for each other down low. And with guards like Jill Nagy and Morgan Falcone, and with Madi (McKee) at center, we can play a real team game.

“It’s meant a lot winning the Central League and the district championship. Now those of us who are finishing up want to really do something to remember our last season by.”

The District 1 champion Jags will play Council Rock North (21-6), the seventh seed out of District 1 Friday night in the quarterfinals at a site and time to be determined. C.R. North defeated Dallastown, 40-29.