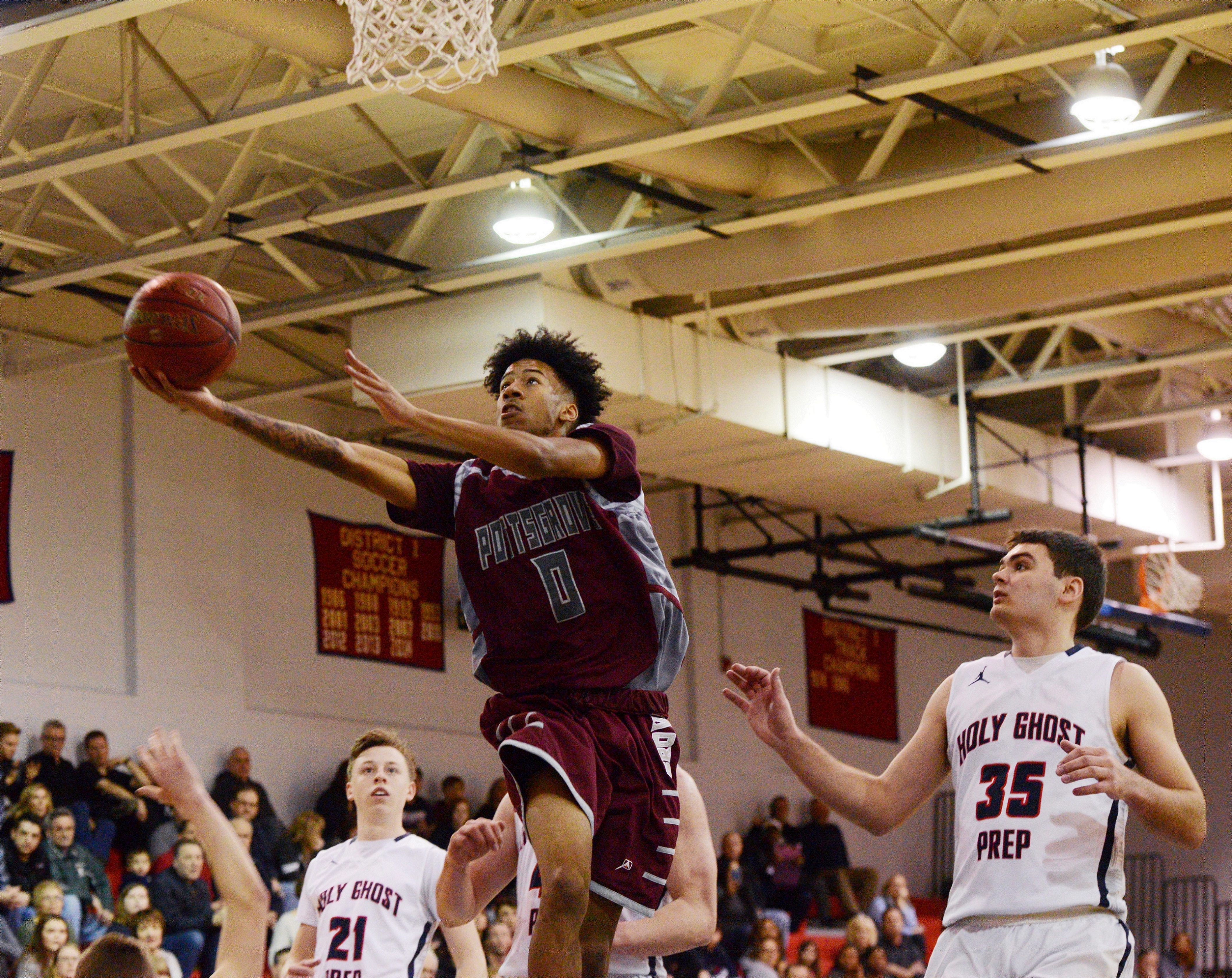 In a banner year for the Pioneer Athletic Conference, five teams start their pursuit for a state championship this weekend.

Pottsgrove (1-4) vs. Abington Heights (2-1) >> After advancing to the Pioneer Athletic Conference playoffs for the first time since 2014, the Falcons finished fourth in the District 1-5A tournament, picking up wins over Great Valley and Holy Ghost Prep before falling to Sun Valley in the semifinals and Penncrest in the third/fourth place game. Pottsgrove is making its first state playoff berth since 2010.

Senior point guard Manny Clark, who is second in the Pioneer Athletic Conference at 17.6 ppg, is the Falcons’ go-to-guy on offense. Pottsgrove also has two very talented scorers in senior guard Justin Robinson (14 ppg) and senior forward Khaliym Smith (13 ppg). Senior wing Jimai Springfield is Pottsgrove’s fourth option on offense and usually has the assignment of the other team’s top guy on offense. Senior forward Cameron Mowery rounds out the starting lineup, while Gabe Applebach, Luke Kaiser, Ryan Bodolus, Jay Sikso, Nicholas Stringer and Evan White have all seen action off the bench.

The Falcons get the reigning Class 5A state champions in the opening round. The Comets locked down their state playoff spot with a 43-36 win over Crestwood in the District 2-5A championship game. Abington Heights, which has won eight of its last nine state playoff games, returns four starters from last year’s team in guards Jack Nealon and Corey Perkins and forwards George Tinsley and Mike Malone.

Tinsley (19.6 ppg) is a 6-foot-5 forward headed to Binghamton next season who has scored almost 1,500 points in his high school career. Joining them in the starting lineup is senior guard and Ursinus recruit Trey Koehler (13.9 ppg), who was a starter for the team’s state semifinal run two seasons ago before missing last season’s playoff run with an injury.

Spring-Ford (1-10) vs. Roman Catholic (12-1) >> Spring-Ford locked down the last District 1 spot in the Class 6A tournament with a 62-61 double overtime win over Cheltenham in the 10th place game. After advancing the to the state tournament for the first time in 2014, the Rams are now making their third state appearance in five years. Their only playoff win came when they advanced to the second round of states in 2016.

Senior forward Noah Baker (15.9 ppg) has a strong inside and outside game and has carried Spring-Ford at times this year. Senior forward Robert Bobeck (10.6 ppg) has really come on strong for the Rams late in the season. Senior guard Ryan Hagan and junior guard Tyler Scilingo give Spring-Ford two steady ball handlers and sharpshooters at the guard position. Hagan’s three at the end of regulation against Cheltenham sent the game to overtime. With junior forward Tre Medearis out, junior Patrick Kovalseki has joined the starting five, and sophomore Zack Skrocki has turned into the Rams’ sixth man off the bench.

The Rams will also have their hands full with a reigning state champion in their playoff opener. Roman Catholic is the defending Class 6A champions and is once again one of the favorites to win the state. The Cahillities defeated La Salle for their second straight Philadelphia Catholic League championship and earned District 12-6A’s top spot by defeating Boys’ Latin, 94-72.

The Cahillites have a pair of Division I recruits in seniors Hakim Hart (Saint Joseph’s) and Seth Lundy (Penn State). Also back from last year’s team is sharpshooter Louie Wild. Freshman big man Jalen Duren, another first team All-PCL selection, and freshman guard Justice Williams are two very talented youngsters. Roman will be without star junior point guard Lynn Greer, who was ruled ineligible by the PIAA after transferring back to Roman after a brief stint at Oak Hill Academy (Va.).

Methacton (1-7) vs. Hazleton (2-1) >> After claiming their second straight Pioneer Athletic Conference championship, the Warriors defeated Central Bucks South in the second round of to districts to advance to the District 1 quarterfinals, where they fell to Coatesville in a close contest. Methacton loss to Chester in a district seeding game before defeating Perkiomen Valley in the seventh/ eighth place game. Like Spring-Ford, Methacton had no state playoff history until recently. The Warriors went to states for the first time in 2013 and won their first and only state playoff game in 2015 against a Whitehall team that featured current New York Giants running back Saquan Barkley.

Hazleton was a state semifinalist last season, defeating District 1 champion Abington before falling to state runner-up Lincoln. Despite the departure of two first team all-state players, the Cougars topped Scranton, 48-35, in the District 2-6A title to set up the opportunity for another state title run.

Perkiomen Valley (1-8) vs. William Allen (11-1) >> The PAC runner-ups defeated Cheltenham in the second round of districts before running into eventual district champion Abington in the quarterfinal round. They lost both of their state seeding games, falling to Norristown and Methacton. It was the Vikings’ fourth meeting with both teams this season. The Vikings last made the state playoffs in 2017 when they upset Roman Catholic before losing to eventual state champion Reading in the second round. Senior guard Tyler Strechay is the only one remaining to see significant action for that team.

Strechay leads the PAC in scoring at 18.4 ppg. Senior guard Zach Krause (12.9 ppg) is the Vikings’ second top option, especially when he gets hot from deep. Senior guard AJ Hansen, senior forward Ian Streeper and sophomore wing Kameron Parks are Perkiomen Valley’s other three starters. Senior forward Bryce Streeper is a reliable post presence off the bench. The Vikings have also worked senior Connor McShea back into the rotation. McShea was a starter last year, but he didn’t make an appearance this season until the PAC championship game as he was recovering from a torn ACL.

William Allen (Allentown High), is making its first state appearance since 2017 and fourth state playoff trip since 2011. After entering the District 11 tournament as the No. 5 seed, the Canaries defeated Parkland, 76-50, for their first district title since 2011.

Norristown (1-5) vs. Boys’ Latin (12-2) >> The Eagles lost an overtime thriller in the PAC semifinals to Perkiomen Valley. They bounced back with a blowout win over Central Bucks West in their District 1 opener. In a quarterfinal round that did not treat the PAC to kindly, Norristown lost to Pennridge. The Eagles recouped again however, defeating Perkiomen Valley and Chester to lock up District 1’s fifth 6A seed.

The Eagles will be without leading scorer and rebounder Mickeel Allen for their state opener. The senior forward picked up two technical fouls in the district seeding win over Chester and will serve a one-game suspension. They could also be without sophomore wing Aaron Reddish, who injured his hand in the PAC semifinal loss. He missed all four district playoff games and is questionable for Saturday’s game.

Senior guards Tyler Lyons, Marcus Sanford and Xavier Edwards will have to play tough on both ends for the Eagles, who like to win by turning defense into offense. With Allen out, Norristown will also need big performance from sophomore forward Nizer Kinney, who can shoot the three and get tough baskets inside.