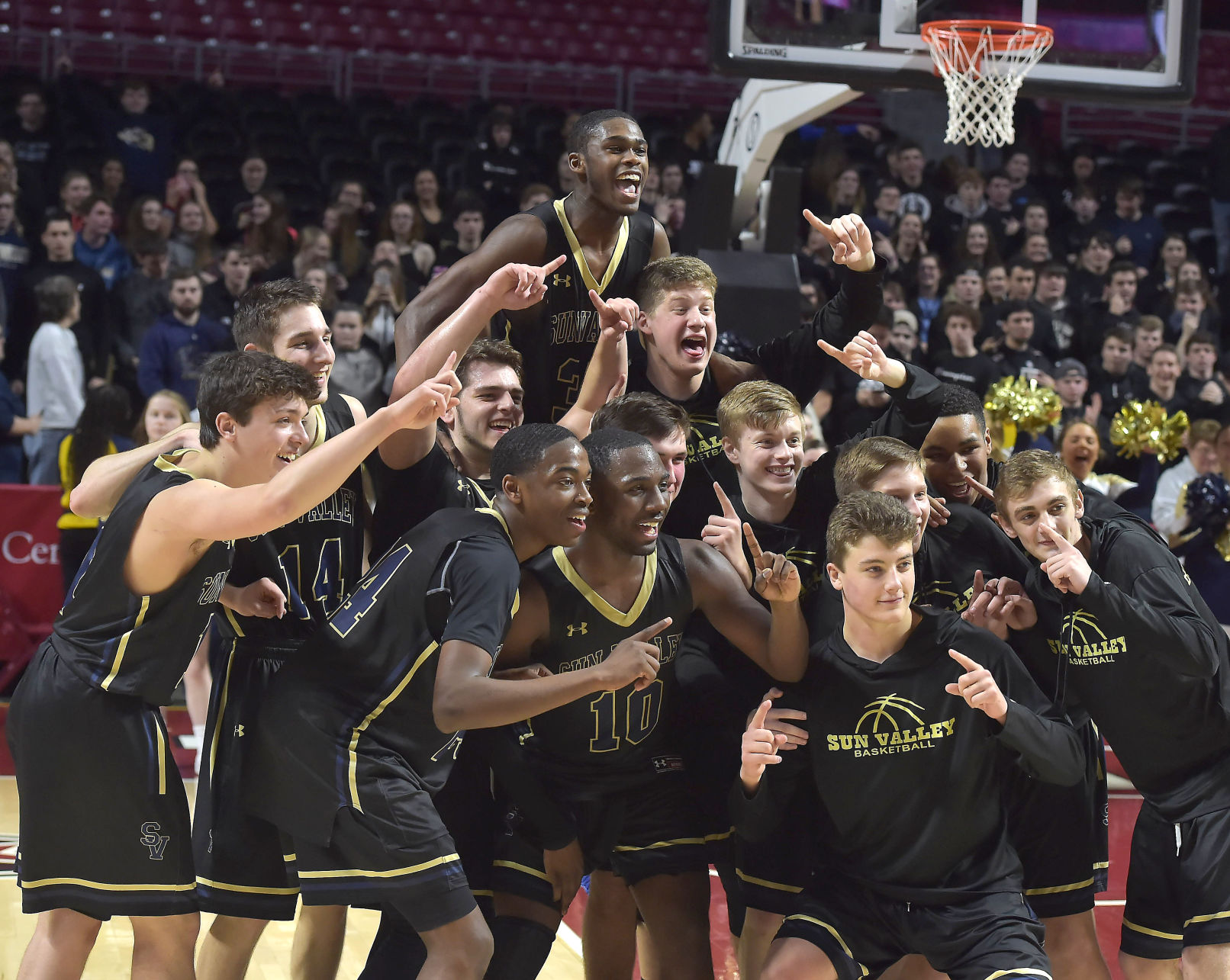 PHILADELPHIA — Steve Maloney heard the questions when he signed on five years ago to coach the Sun Valley boys basketball program.

What was he thinking?

Never mind that Sun Valley is his alma mater, Maloney was tasked with rebuilding a program from the ground up.

“I had people tell me, ‘Why are you taking that job?'” Maloney said. “I had a nice assistant’s job at Strath Haven under (Tom) Dougherty. But I took the job.”

Maloney wanted the challenge because he knew what was around the corner. He saw the potential of several middle school players at the time, who today are responsible for leading the program to a piece of the Ches-Mont League title and, after Saturday’s 65-54 win over West Chester East, its first District 1 championship.

“There was an energy resurgence back into the program,” Maloney said. “We knew this (senior class) had a chance to be good, but we didn’t know we’d be wearing gold medals around our neck. ”

Those now-senior players are Lance Stone, Vinny DeAngelo, Marvin Freeman and Isaac Kennon. All four were in the starting lineup at Temple University’s Liacouras Center and did what Maloney never thought was possible five years ago.

“We did it together,” said Freeman, who scored 18 points and was the unofficial MVP of the game. “All four us have been playing together since we were 10 years old in Aston A.A. We go way back, playing all-star ball in the fifth grade. We went to school together our whole lives, we just have so much chemistry together. I love these guys, I love this team.”

Sun Valley led by a point after three quarters. Gibby Trowery (18 points) sank a 3-pointer to give East the lead at 42-40 to start the final period.

“We could’ve crumbled when they went up by two, but we stayed together,” Freeman said.

Freeman, who shot 7-for-12 from the field, responded with a trey. While the Vikings regained a one-point lead, Kennon’s basket put the Vanguards back in front. DeAngelo then hit two of his eight free throws in the fourth quarter to make it a 50-47 lead with 4:10 to play, and Sun Valley never looked back.

Sun Valley is the District 1 Class 5A champion

“The first game we played them (a 64-59 East win), we were up seven and they came back just how they came back today,” Freeman said. “But we didn’t stay together in that game. We turned the ball over, they took the lead and they won the game. We forced it to overtime, but Tym Richardson, hats off to him, he hit a big shot and they got the win.

“With this game, our championship game, all we did was go over a game plan. We studied very hard and went over the game film. We were focused from day one. We had championship level practices and we knew what we needed to do to win. We got the big stops when we needed to and we won.”

Richardson, a 6-4 junior guard, and 6-9 senior center Andrew Carr were Sun Valley’s main concerns. The Vanguards (18-7) had to limit those two players if they wanted a chance to win.

Sure enough, Richardson and Carr never dominated Saturday’s game, as they combined for 20 points on 7-for-25 shooting.

Marvin Freeman with this 3-pointer + a little sauce at the buzzer gives @svvanguards the 29-26 lead at halftime… Wow. pic.twitter.com/6b1GiolJKc

Sun Valley’s best scorer, DeAngelo, was relatively quiet until the fourth quarter when he scored eight of his 17 points — all at the foul line. DeAngelo played a great defensive game and came up with a steal in the final minute to help secure the win. Earlier in the quarter, after SV gained a 50-47 lead, DeAngelo blocked a shot off the hand of Carr, which was a turning point.

Sun Valley’s Lance Stone flies in for a layup during the first quarter against against West Chester East in the District 1 Class 5A final Saturday at Temple’s Liacouras Center. Stone scored seven points as the Vanguards won, 65-54. (Pete Bannan/Digital First Media)

“The main thing was just defense,” DeAngelo said. “The last game we played them man the entire time. Toward the end, Richardson and Carr kind of took over. We let them get to their spots and hit big shots. So, today, we knew we could not let 21 (Richardson) and 15 (Carr) beat us. We started in a couple of zones, it didn’t work too well, then we went to man and we kind of held them. In the fourth quarter, toward the end, we went back to a 3-2 and that was huge.”

Trowery popped two 3-pointers, but Carr and Richardson were held to just five points in the final period.

The teams came out firing in the first half. After eight minutes, East had an 18-17 lead. Billy Fisher hopped off the bench to drill a 3-pointer to even the score at 26 in the final minute before halftime. Then, Freeman stole the show when he banked a fadeaway 3-pointer as time expired to give Sun Valley a 29-26 advantage at intermission

Freeman got up and taunted the raucous West Chester East student section. Freeman’s big shot had silenced them.

“I’m not even going to lie — I feel like I’ve been hitting that shot at halftime my whole life,” Freeman said. “You go back to when we played our rival Unionville in our conference, I remember, in my 10th-grade year, I hit a stepback in the corner. Same exact shot to get it into overtime and we won that game. All I did was pump-fake, use the screen very well, step back and take a shot.

“That gave us a major momentum boost. At that time, we had so much confidence going into the third quarter. We felt like we could do anything at that point.”

Freeman embraced the bright lights and the big stage. That’s just who he is.

“Shoutout to Marvin. That shot at the end of the half was a huge momentum swinger,” DeAngelo said. “You could tell when you watch him play, he lives off the crowd. Just to be in this atmosphere and for him to step up, I wasn’t surprised at all. That’s Marvin, that’s his game.”

Kennon shot 8-for-9 at the foul line and tallied 17 points for the Vanguards.

Stone added seven points, four rebounds and an assist. Dom Valente hit a 3-pointer in the fourth period and finished with five points.

“On the back of our warmups, it says ‘Brotherhood’ and I think that really emphasizes what we are,” DeAngelo said. “To win a district championship, it’s surreal. I’m so happy, so proud of all my teammates and coaches.”