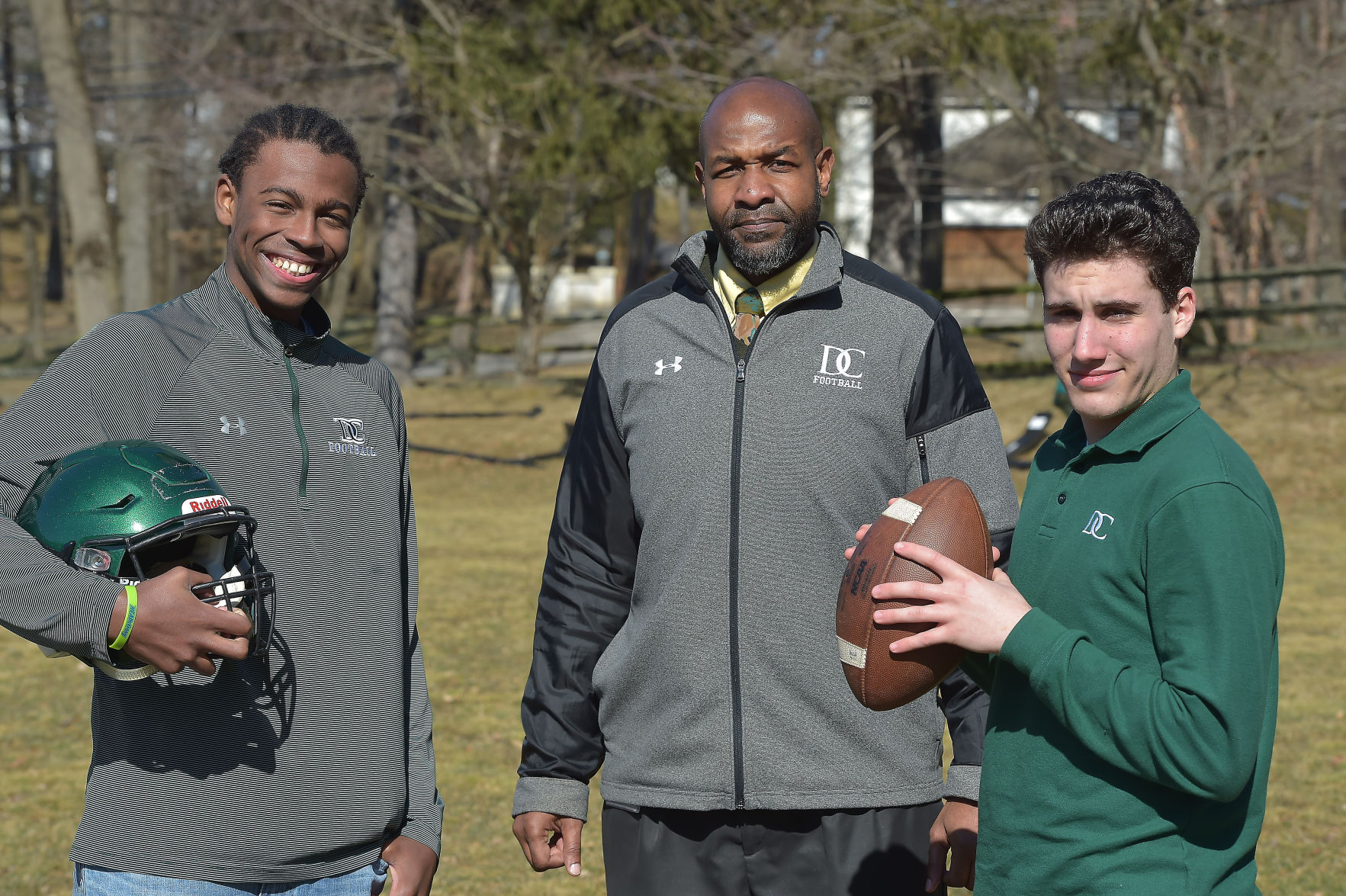 The bus Nadir Bryant takes to school each day from his King of Prussia home arrived at Delaware County Christian School just as it had the day prior. There was nothing particularly noteworthy, just his morning routine, Bryant said.

He de-boarded the bus Thursday, Feb. 6, and within moments was met by an assistant coach of Delco Christian’s football team — a team that had cancelled its 2018 campaign due to an insufficient number of players. The assistant had good news: Football would be returning to the Newtown Square school.

But there was a catch.

Delco Christian announced in a Feb. 6 email to parents and students its decision to move on from traditional 11-man football and embrace the 8-man version of the sport.

“I remember hearing the news right there at the bus and thinking, ‘It doesn’t matter to me,’” said Bryant, a sophomore. “All I remember hearing is, ‘Football got the green light,’ and I was so excited. For me, personally, I loved hearing it.”

The Knights will play the 2019 season as one of six Pennsylvania high schools in the newly formed Keystone State Football League (KSFL). They join The Perkiomen School, George School, Valley Forge Military Academy and Mercersburg Academy in Central Pa., the only school outside of the greater Philadelphia area. Another school yet to be announced will also join.

The schools are Pennsylvania’s pioneers of the 8-man game. The sport is not offered anywhere else in the state, nor is it recognized by the PIAA, and PIAA officials have given no indication that will change any time soon.

That leaves Delco Christian and its fellow KSFL teams to fend for — and play among — themselves. The KSFL will play eight regular-season games, followed by a playoff tournament. And for the first time in the history of Delco Christian’s program, home football games will be played on campus. The Knights had used Marple Newtown as their home venue.

The scheduling format and game sites will require an adjustment period. So, too, will KSFL teams’ acclimation to the rules. Three linemen are required rather than five, and the field is 80 yards by 40 yards (instead of the traditional 100 x 53 ⅓) with 10-yard end zones.

“I know I’ll need to look at the rule book before we do anything,” first-year football coach Lloyd Hill said. “That’s true for rules about starting camps and working out the players and just making sure we do everything correctly.”

The same applies to Hill’s players. So, what does Bryant know about 8-man football?

“Nothing, really,” he said.

“But we’re ready to get started,” freshman quarterback Josh Dell’Arciprete said. “We want to get down to business. We want to play.”

The Knights christened their football program in 2010 at the junior varsity and freshman levels before launching varsity. In seven seasons, the Knights won 49 of 74 games, two District 1 championships and one Bicentennial Athletic League title. The move out of the BAL is for football only.

“This is a good move for our school and our community,” said Hill, also a math teacher at DC. “It’s very exciting to get that football community back together again and to be with the young men and teach them the game and valuable life skills.”

Bryant vividly recalls the moment when he learned the Knights were resurrecting football. Likewise, he cannot escape the painful memories of the program’s ill-fated 2018 season. Bryant and his teammates, he said, were readying for a preseason scrimmage in August when word started spreading among the players that the season could be short-lived.

Delco Christian shut down its 2018 football campaign before it began. Coaches informed the players during an Aug. 24 locker-room meeting that the team would fold due to a lack of available players. At that time, the roster had 25 players.

“(The season cancellation) drew me away from my friends and my brothers,” Bryant said. “It was devastating.”

Stories like the Knights’ 2018 season have played out across the U.S. in recent years, and administrators at the state’s smallest schools are having to rethink their approach to football. But it’s not a problem exclusive to small-enrollment schools.

Nationally, high school football players numbered more than 1 million in 2017-18. According to data from the National Federation of State High School Associations, that marked a 2 percent drop in participation from 2016 and a 6.6 percent decrease over a 10-year period.

“We knew we had to do it. We needed it,” Hill said of Delco Christian’s switch. “Last season was a perfect storm of losing players for whatever reason. Could we have gone through with the season? Yeah, but it would’ve been tough.

“This year, other schools are doing it and the goal is to build up the sport and the support more widely.”

The 8-man football movement in Pennsylvania began last season at The Perkiomen School. With no regional schools fielding a comparable football team, Perkiomen played five of its six games against teams from New England, with four on the road. The Panthers went 1-5.

“(The schedule) made for some long road trips,” said Panthers coach Casey Perlstein of his first year on the job.

Perlstein said 29 students arrived for Perkiomen School’s 2018 football tryouts. From conversations with leadership at the school, he said, it was the largest first-day turnout for football camp “in almost 10 years.”

The KSFL’s teams, in recent years, have experienced similar results on the field. Mercersburg Academy went 1-8 in 2018, its final year playing the traditional 11-man game — a sport the school had played since 1894. George School (1-7) and Valley Forge Military Academy (2-7) also posted losing records.

“An outstanding core group of school administrators,” formed the KSFL, according to Perlstein, “and I have the utmost confidence that we will have a successful inaugural year.”

In Pennsylvania, 8-man football is far from a phenomenon.

In fall 2018, 567 high schools fielded traditional 11-man football teams across the state’s 12 districts, according to the PIAA. Only five KSFL teams, with a sixth set to join this spring, have announced their commitment to 8-man football. It has taken root elsewhere, though. Per NFHS data in 2017-18, more than 19,000 players in 19 states took part in 8-man football. Though the 847 participating schools is a drop in the bucket compared to more than 14,000 offering 11-man football, the modified version has produced success stories, like Dallas Cowboys linebacker Leighton Vander Esch, who played 8-man at Salmon River High School in Riggins, Idaho.

The future of 8-man football in Pennsylvania is uncertain. To date, discussion of the sport within PIAA circles has been limited. Tucked inside the minutes of the most recent PIAA Board Meeting, is the following sentence on the PIAA’s next steps regarding 8-man football:

“Approved the recommendation of the PIAA Football Steering Committee to support a request that all District Football Chairmen take a survey of their football schools to see if there is interest in 8-man football and/or the use of other alternative safety/participation rules at the sub-varsity level.”

Melissa Mertz, associate executive director of the PIAA, said the viability of 8-man football as a PIAA sport will be revisited at the PIAA’s next Board of Directors and Competition Committee meeting March 20.

“We have had brief discussions of 8-man (football) at the last PIAA Board of Directors meeting,” Mertz said in an email. “We will (be) discussing it further through our Competition Committee to see if it has merit.”

In District 1, 25 football programs compete at the 5A level. Delaware County is home to the two-smallest schools for regard to male enrollment: Interboro at 386 and Chichester at 400.

Each season, now former Chichester coach Ryan Smith assembles a roster of players who have competing social and athletic interests, or who face pressure to leave the sport as the argument continues around concussions and their health effects. At Interboro, veteran coach Steve Lennox understands the financial pinch of running a program.

That’s why Smith and Lennox agree on the value of 8-man football.

“It gives small schools an opportunity to play football and keep their programs going,” said Lennox, who will enter his 27th season at Interboro. “I don’t see anything wrong with it. Any football is good football.”

Said Smith, Chichester’s coach for nine seasons before taking over the same position at Penncrest in February: “What’s the alternative to cancelling the program? You play 8-man football. That’s what you do. For everyone who says, ‘That’s not the game. It’s not tradition. It’s not real football’ — for everyone who says that, it’s football. Plain and simple.”

Of course, Smith also sees the downside of the 8-man game. At Chichester, a “community school,” in Smith’s words, private schools offering a newer version of the sport with smaller rosters and the opportunity to provide more playing time “could become appealing to parents who want their kids there.”

“It’s just an added challenge we’ll have to contend with,” Smith said. “But I want to be clear: What Delco Christian is doing, it’s commendable. In a career that has begged me to be creative to keep players on the field, I’m happy for their school. Whoever is in charge has given them the latitude to think creatively and outside the box.”

Hill, the coach at Delco Christian, hopes detractors to 8-man football and his school’s decision to play it in 2019 will eventually warm up to it.

“I saw the joy in our kids’ eyes when we told them football was back,” Hill said. “When you ask yourself about 8-man football and if it’s good for us and our school, to me, that’s all you need to know.”